I came across this beautiful graph in an article in the journal Cell this week. It shows declining levels of genetic variability among 51 populations of humans across the planet, plotted against the distance of each population from East Africa: 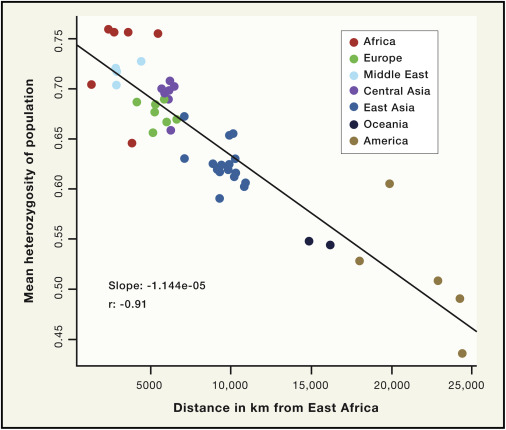 The data in the figure are from a 2008 paper in Science by Jun Li and co-workers [JAC: reference at bottom; free access] looking at human genetic variation. They studied 938 unrelated people and  650,000 genetic variants, measuring the levels of heterozygosity in each population – this the frequency with which individuals had different copies of a each genetic variant.

This striking result is additional evidence that we originated in Africa and gradually moved around the planet, losing genetic variability as we went. The last places we reached in this survey – the Americas, show the smallest levels of variability.

This is exactly what you would expect: in species that have spread geographically, the ancestral populations have the highest levels of genetic variability. Populations that have moved into new areas tend to lose variability for two reasons. First, they initially contain just a subset of the variability present in the original population. This is probably the explanation for most of the effect on this figure, as many of the genetic variants they have studied will be in ‘junk’ DNA that has no effect on the phenotype. Where the variants are in genes that have an effect, variability can be lost again as the population is subject to new selection pressures in their new environment, which further reduces heterozygosity. Or, as the authors put it:

This trend is consistent with a serial founder effect, a scenario in which population expansion involves successive migration of a small fraction of individuals out of the previous location, starting from a single origin in sub-Saharan Africa.

The final reason why this figure is so pleasing is that it gives a straight line—that doesn’t happen very often in biology!

However, if we look closely, it’s not totally linear – in particular, African populations can show varying levels of variability that do not appear to be related to geographical distance from East Africa (in fact, from Addis Ababa). If you plotted only the African data, you wouldn’t be very impressed. This African variability may be for a number of reasons: the origin of humans may not have been precisely in East Africa, or humans have lived for far longer in Africa than anywhere else on the planet, and may have been subject to particular selection pressures reducing their variability (for example, in an isolated group). An explanation of those four African points at the top, which show essentially identically high levels of variability, may be that there were consistently high levels of gene flow between these groups, maintaining the variability.

Whatever the case, this figure underlines that we are a global species, spanning out across the planet, adapting and losing genetic variability as we traveled.

48 thoughts on “A lovely graph that tells our story”