This article just in from the “Everyone’s a Nazi” wing of the Authoritarian Left, as reported (of course) by PuffHo. Click on the screenshot to see the article.

The author, Jesse Benn, who describes himself as an “engaged citizen”, is better characterized as an “enraged citizen”—or, better yet, a Woke Person.  His HuffPo posts, which you can see here, are uniformly against bigotry, which is good, but also go to ludicrous extremes, as in his approbation of political violence from the Left: “Sorry Liberals, a violent response to Trump is as good as any.” (I believe the comma missing after ‘sorry’ is an error, not a double-entendre). He’s always banging on about “privilege,” and here’s what he says about the error of condemning violence against Trumpies:

Last, I want to briefly note the problematic nature of people with privilege condemning violent resistance to Trump as an absolute moral failing, or denying its logic. Whether you would personally engage in violent conduct matters little to your ability to understand where it comes from. Some people have the privilege to consider the implications of Trump’s rise in the abstract and negotiate which means are necessary. That’s not true for everyone. And when those who hold that privilege dismiss the potential validity or logic of violent resistance, it’s effectively an effort to dictate the rules under which oppressed peoples respond to existential threats, and to silence forms of resistance disagreeable to privileged sensibilities. Don’t be that liberal.

I’m not really sure what he means by the “privilege to consider the implication of Trump’s rise in the abstract.” It’s not a “privilege” to figure out what Trump stands for and what he’s doing; it’s a simple matter of being aware and rational: “woke” in the genuine sense.  But what he says after that is, translated into English, seems to be this: “Some people who can’t change the Trump administration but also also aren’t aware enough to figure out what’s going on should be able to commit violence. It’s a good substitute for being rational and logical.”

Benn’s latest post on football players who, last Sunday, stood up during the playing of the National Anthem, takes a similar tack, but accuses the non-kneeling athletes of “standing for white supremacy.” Remember that the original protests by Colin Kaepernick and Eric Reid, involving their own kneeling during the National Anthem, were meant to show their opposition to “systemic oppression against people of color, police brutality and the criminal justice system.” That was set off by the killing of unarmed blacks by police, in particular Alton Sterling in New Orleans (Sterling actually did have a gun, but wasn’t brandishing it).  The protests spread, and then many other players, managers, and football officials got involved after Trump began accusing the protestors of being unpatriotic and “disrespectful” toward the American flag and Anthem. Many of them joined in last Sunday’s protests, and many did not, but it was a rare show of political protest on the part of the National Football League.

But to Jesse Benn, that wasn’t good enough. Those players who remained standing, he says, weren’t woke enough to sympathize with those who didn’t appear on the field, or who went down on one knee in protest.

The absence of white athletes kneeling for the anthem Sunday was a particularly illustrative moment in white privilege.

See, for white athletes the anthem and American flag do represent freedom, liberty and whatever other amorphous American values one might ascribe these symbols. So, from their view, kneeling would be disrespectful to the privileges a white supremacist nation affords them.

. . . Now, I’m not going to spend much time with the most obvious counter, but it’s worth stating. In the fairytale we Americans tell ourselves where soldiers fight wars for freedom and not imperial conquests, the story says they’re fighting for someone’s right to protest, not the opposite. So using the troops as a cudgel against protest wholly misunderstands even our own national fairytale.

So, that’s obvious enough, but what I’m talking about is this. If white athletes can’t fathom kneeling because they feel soldiers fought for their rights and blah blah blah patriotism, it’s because they are treated as full citizens and afforded those rights they imagine soldiers fought for. Interpreting their own experience as something more universal, they struggle to understand why anyone should kneel. Indeed, for them, the anthem and American flag represent promises fulfilled. [JAC: this is really bad writing.]

This is the problem of privilege. It skews our ability to grasp what the world looks like outside our view.

(Note that in his article “Blacks” is capitalized and “whites” is not, which, according to Coyne’s Rule of Social Justice Lexicon, means we’re dealing with a True Authoritarian.)

Benn’s article exemplifies the issue and the problem of the fracturing Left.  Nobody would deny that there’s racism in our society, though I would question whether it should be called systemic—that is, whether unequal rights and treatments of black Americans are actually codified in the machinery and rules of the government.  There are racist cops, but not all cops are racists, and I doubt that any police department systematically tells its officers to kill unarmed blacks. In government, it’s hard to find codification of racism in laws and regulations. The racism that remains in society is largely individual racism, not “systemic” racism, but people like Benn like to call it “systemic” if it happens several times. It’s like saying that murder is systemic in males because most murderers are men and murder is not vanishingly rare.

Regardless, the Left needs to continue its work dismantling the inequities that remain for minorities, whatever their source. What we don’t need to do is call those who agree with us in general—but aren’t as extreme as someone like Benn—”white supremacists”. Many of the players who didn’t kneel down on Sunday were surely sympathetic with moral inequalities in society, but at the same time were in general proud of what America has become, and what in principle and often in practice, it stands for. (Freedom of speech is one of those things, which is why we shouldn’t punish those who kneeled.) I am one of those people glad to be an American: perfectly aware of our country’s problems (electing Trump was a big one), but still glad that I’m an American rather than, say, a Saudi or a North Korean. I am not Noam Chomsky.

You can deal with this issue by working against racism and voting for progressive candidates without “taking a knee”. And if you don’t “take a knee”, that doesn’t make you a white supremacist, for crying out loud. In fact, some of those who didn’t “take a knee”, but did link arms with their teammates were black football players. According to ABC, only one in eight players (about 200) didn’t stand for the National Anthem—out of 1696 players on the rosters. Surely many of the non-demonstrators, including those who neither kneeled nor linked arms, were black, though I don’t have a count.  But how on Earth can you call a non-demonstrating black person a white supremacist? Here’s a photo of an NFL game from Sunday, showing a black white supremacist not only standing up, but actually putting his hand over his heart. 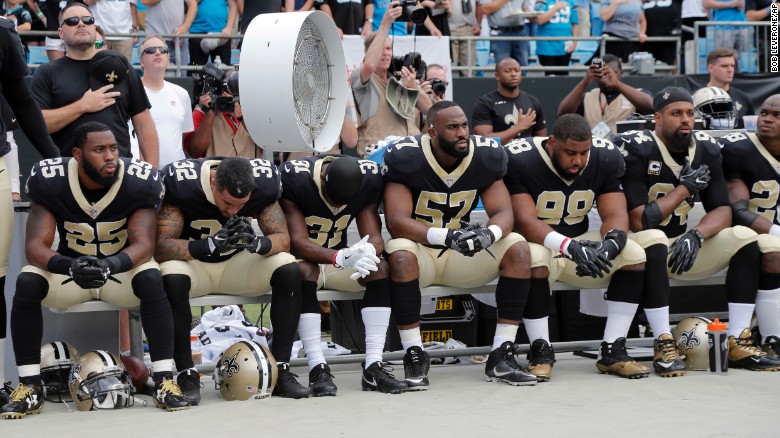 There are lots of reasons why people might choose to stand, including the fact that (as some of them did), they were in the military and were showing respect for America, or a form of patriotism. Or they simply weighed the effect of such a demonstration against their own feelings about America and decided a public demonstration was ineffectual or personally harmful. Do those considerations mean that you’re also a white supremacist? Only mushbrains like Benn think so. He’s the equivalent of the black Antifa woman who harangued a white Antifa man for not punching Nazis.

If the Left is going to get any political power back, we need to stop calling people “racists” or “white supremacists” when they don’t feel exactly the way we do, or act exactly as we do.

73 thoughts on “HuffPo: If you don’t take a knee, you’re a white supremacist”