Yesterday A. N. Wilson‘s new debunking biography of Darwin, Charles Darwin: Victorian Mythmaker, came out in the UK (it’ll be out the U.S. in December), but a while back it had already caused a fracas among reviewers. While a few reviewers liked it, most of them, including anyone who knew anything about evolution or Darwin, gave it very bad reviews for its accusations that Darwin was at once a). a plagiarist, stealing all his important ideas from other people and not giving them credit, b). a racist, devoted to white supremacy and “Social Darwinism”, and c). scientifically wrong, promoting a theory for which there was no evidence—at least no evidence for “evolution between species” (sound familiar?).

I’ve written about some of this controversy here, here, here, and here, but will review the book more formally after I’ve read it.

Below, thanks to Matthew, is a four-minute clip from BBC’s Newsnight featuring Wilson talking with the host (whose name I don’t know, but readers will supply) and Dr. Simon Underdown, identified as “Principal Lecturer in Biological Anthropology at Oxford Brookes University.”

Wilson, the laterally compressed person on the left, credits Darwin only with being a “very great naturalist”, and faults him for having ideas that produced Social Darwinism (in short, “might makes right”, something Darwin never suggested), as well as a holding racist view of “savages”. Wilson adds that “the idea that one species evolves into another is simply not demonstrated.” (Wilson has also said there’s no evidence for the existence of transitional forms, which is flatly untrue). Underdown counters by saying that Darwin’s juvenile ideas became more liberal as he aged, and that evolution is indeed a testable theory (that was, after all, the object of my first trade book).

Well, Wilson may have gotten the controversy he wanted, but not the critical or commercial esteem. The book is probably at its highest ranking on Amazon UK (1,349, though it may go higher in the creationist US), and, well, the reviews on the Amazon UK site are the worst I’ve seen for any book—ever. 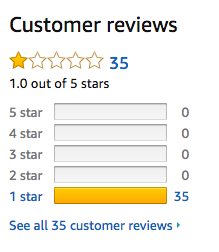 Here’s the review by the esteemed science writer and presenter Adam Rutherford. Ouch!!! (I do like his last sentence.) 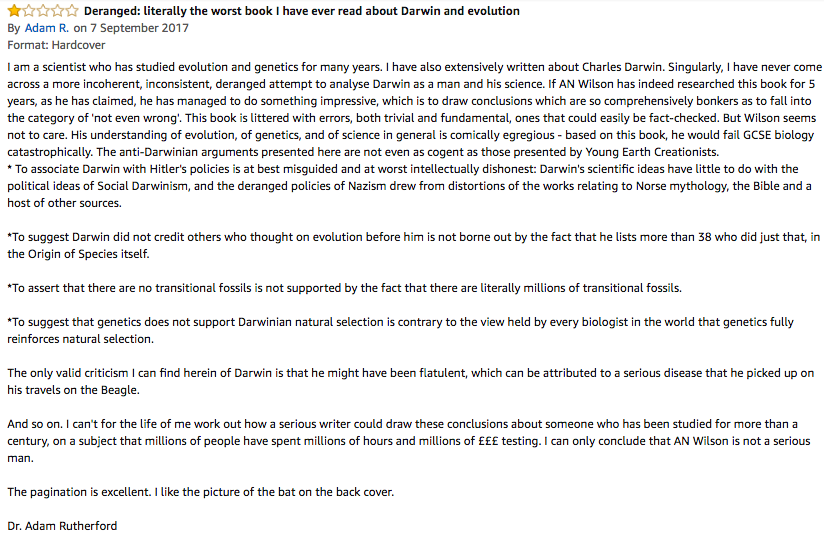 Here’s one that really hit me in the solar plexus:

97 thoughts on “More reaction to A. N. Wilson’s new biography of Darwin”