It’s Sunday, August 20, and that means I have a wedding to attend this afternoon. And that means that posting will be light today as I break out the coat, tie, fancy boots, and hie myself downtown. It’s National Bacon Lovers Day, and the site offers five fun (and some dubious) facts about bacon:

Facts 3 and 5 are the dubious ones. #3 might be right (as they say, “ask your doctor”), but I know from experience that #5 doesn’t work in everyone. It’s also World Mosquito Day, so take a mosquito to dinner. (If you’re offering a blood meal, it’ll have to be a female.)

It’s a big day for evolution aficionados, as it was on this day in 1858 that Darwin and Wallace published their joint papers on evolution by natural selection in The Journal of the Proceedings of the Linnean Society of London. This joint publication was the solution Darwin’s friends brokered when Wallace sent him, a few months earlier, a manuscript in which Wallace outlined a theory very similar to the one Darwin had been working on for decades. Of course Darwin published The Origin the next year, thereby gaining credit as “Mr. Evolution.” This page marks the formal beginning of evolutionary biology, though the papers didn’t excite much attention (that had to wait over a year until Darwin’s Origin): 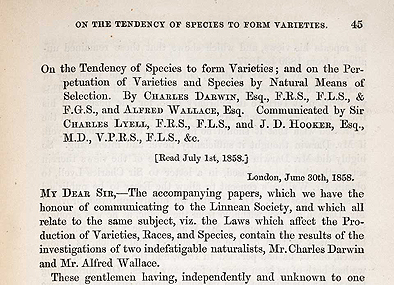 On this day in 1882, Tchaikovsky’s 1812 Overture debuted in Moscow, Russia. On April 20, 1920, the first commercial radio station in the world, then called “8MK” (now WWJ, and still on the air) started broadcasting in Detroit.

There were two events on this day in 1940. First, Leon Trotsky was attacked in Mexico City, getting a ice axe blow in the head. He died the next day. The murderer was Ramón Mercader, a communist born in Spain. Mercader served twenty years for the murder, and then was released to Cuba and then went to Russia, where he died in 1978. Here’s a picture I took when visiting Mexico City in 2011; it shows the desk Trotsky was sitting at when he was assaulted; I was told that the books and papers on the desk are unchanged from that moment: 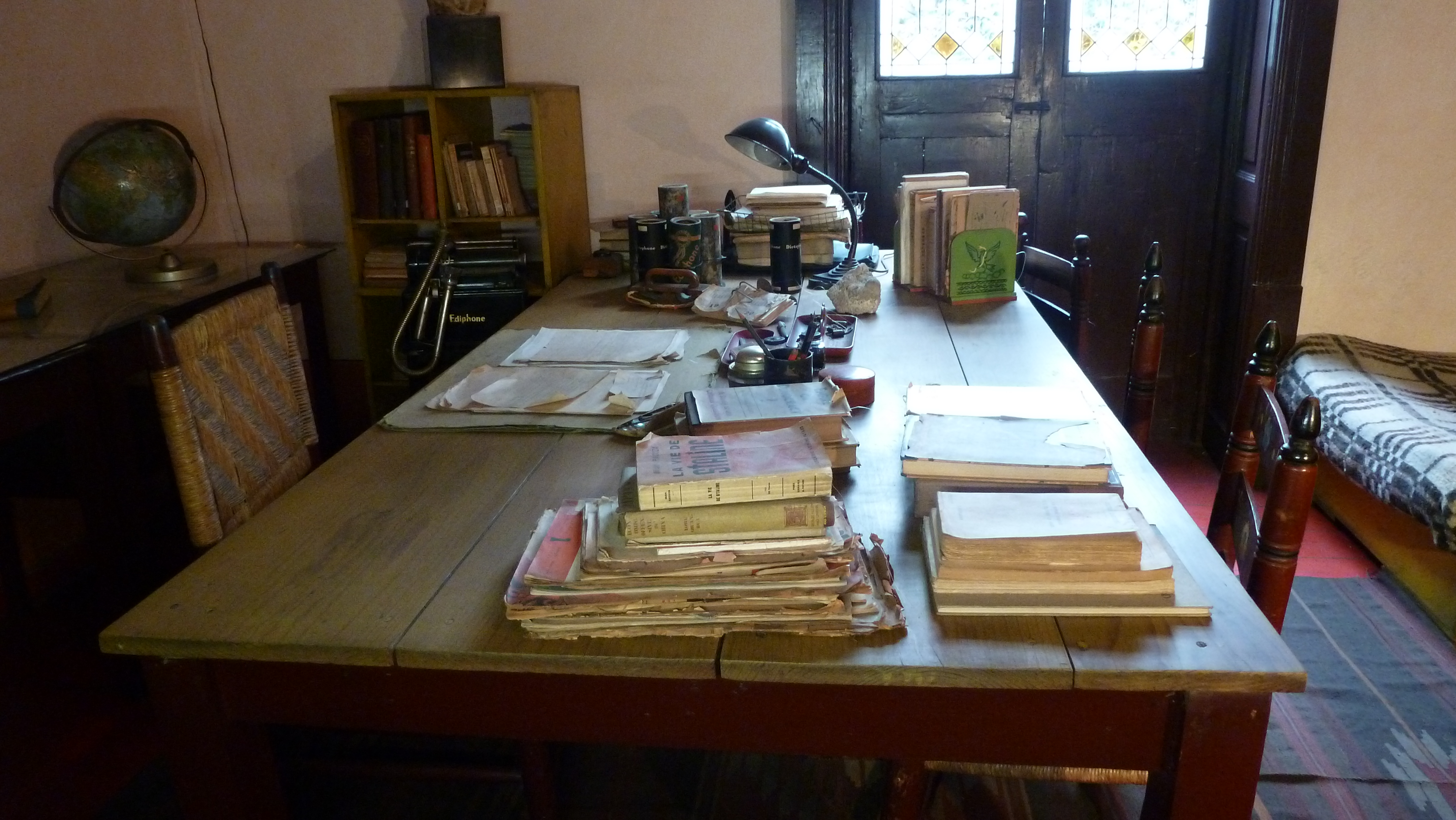 And across the Atlantic, on the same day, British Prime Minister Winston Churchill made one of his most famous wartime speeches, honoring the brave lads of the RAF during the Battle of Britain, which had begun on July 10, 1940. Churchill’s speech contained the famous line “Never was so much owed by so many to so few“. The source of that line is a bit unclear, but here’s an interesting take from Wikipedia:

However, in 1954 “Pug” Ismay related an anecdote to publisher Rupert Hart-Davis; when Churchill and Ismay were

“. . . travelling together in a car, in which Winston rehearsed the speech he was to give in the House of Commons on 20 August 1940 after the Battle of Britain. When he came to the famous sentence, ‘Never in the history of mankind have so many owed so much to so few’, Ismay said ‘What about Jesus and his disciples?’ ‘Good old Pug,’ said Winston’ who immediately changed the wording to ‘Never in the field of human conflict….”

Wikipedia notes the other three famous and eloquent speeches Churchill gave to buck up the Brits:

This speech was a great inspiration to the embattled United Kingdom during what was probably its most dangerous phase of the entire war. Together with the three famous speeches that he gave during the period of the Battle of France (the “Blood, toil, tears, and sweat” speech of 13 May, the “We shall fight on the beaches” speech of 4 June and the “This was their finest hour” speech of 18 June), they form his most stirring rhetoric.

Fortunately the August 20 speech was recorded, and here it is. The description of the RAF’s exploits, containing the famous line, starts at 2:42:

Finally, on this day in 1998 Canada’s Supreme Court ruled that Quebec was not legally allowed to secede from Canada without the approval of the federal government. I suspect Canada will remain united forever.

Today’s Hili dialogue needed a bit of explanation, which Malgorzata provided: “Oh, yes, for Listy [Hili is the website’s editor]. She is lying on Andrzej’s desk chair, where most of Listy is produced. They are always fighting about this chair. Hili thinks that as an Editor-in-Chief she is absolutely entitled to it and that Andrzej should find some other place to sit.”

Hili: Are you aware what responsibility lies with me?
A: Of course. 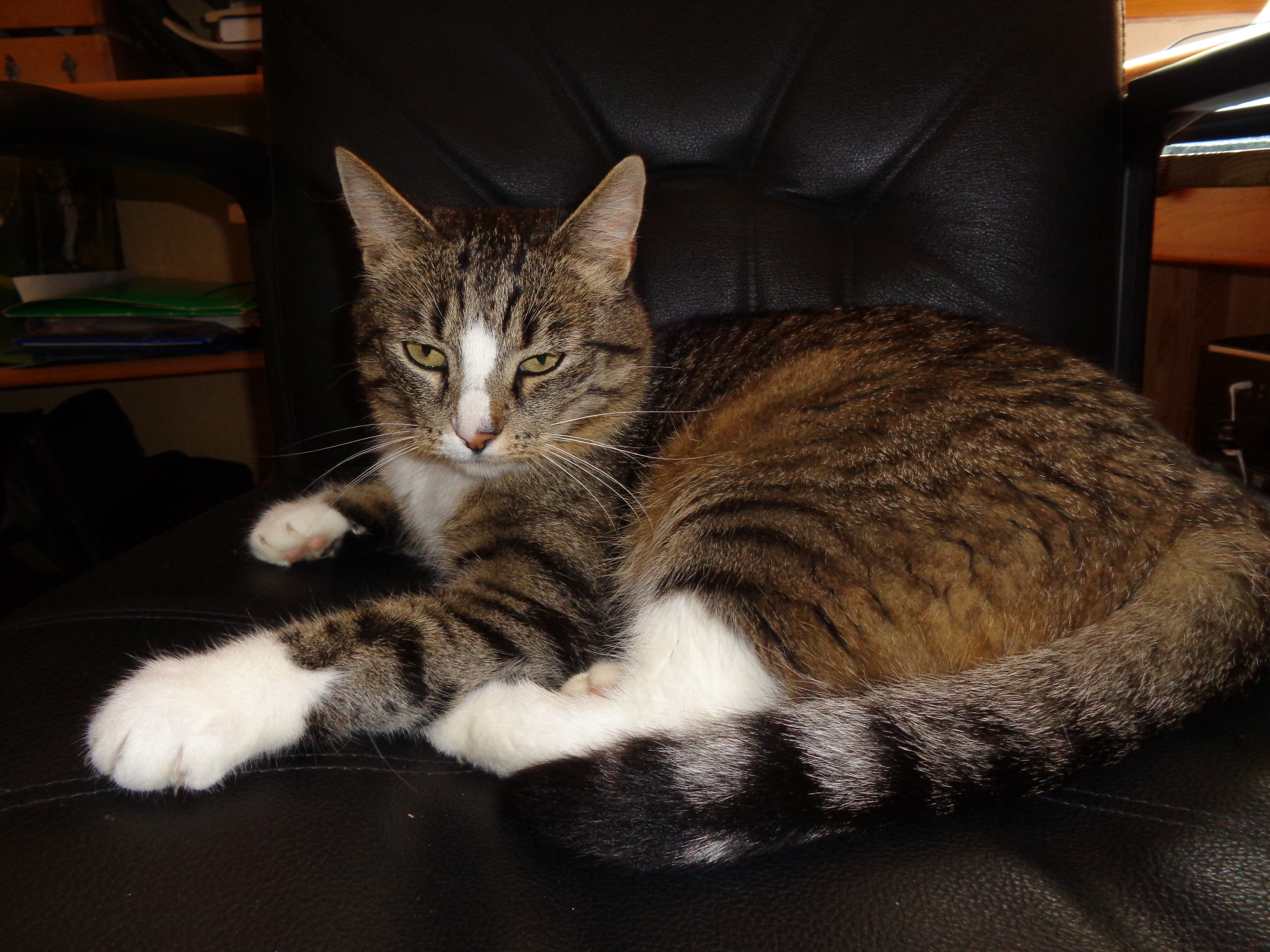 Reader Bill from Oz sent a picture of himself with what I suspect is the same Talkeetna airport cat I showed in yesterday’s Hili dialogue. His comment:

In 2014, my wife and I, along with friends of ours from Minnesota, took the same trip to the top of Denali. We also encountered a lovely, smoochy cat (photos attached). I wonder if he is the same cat? 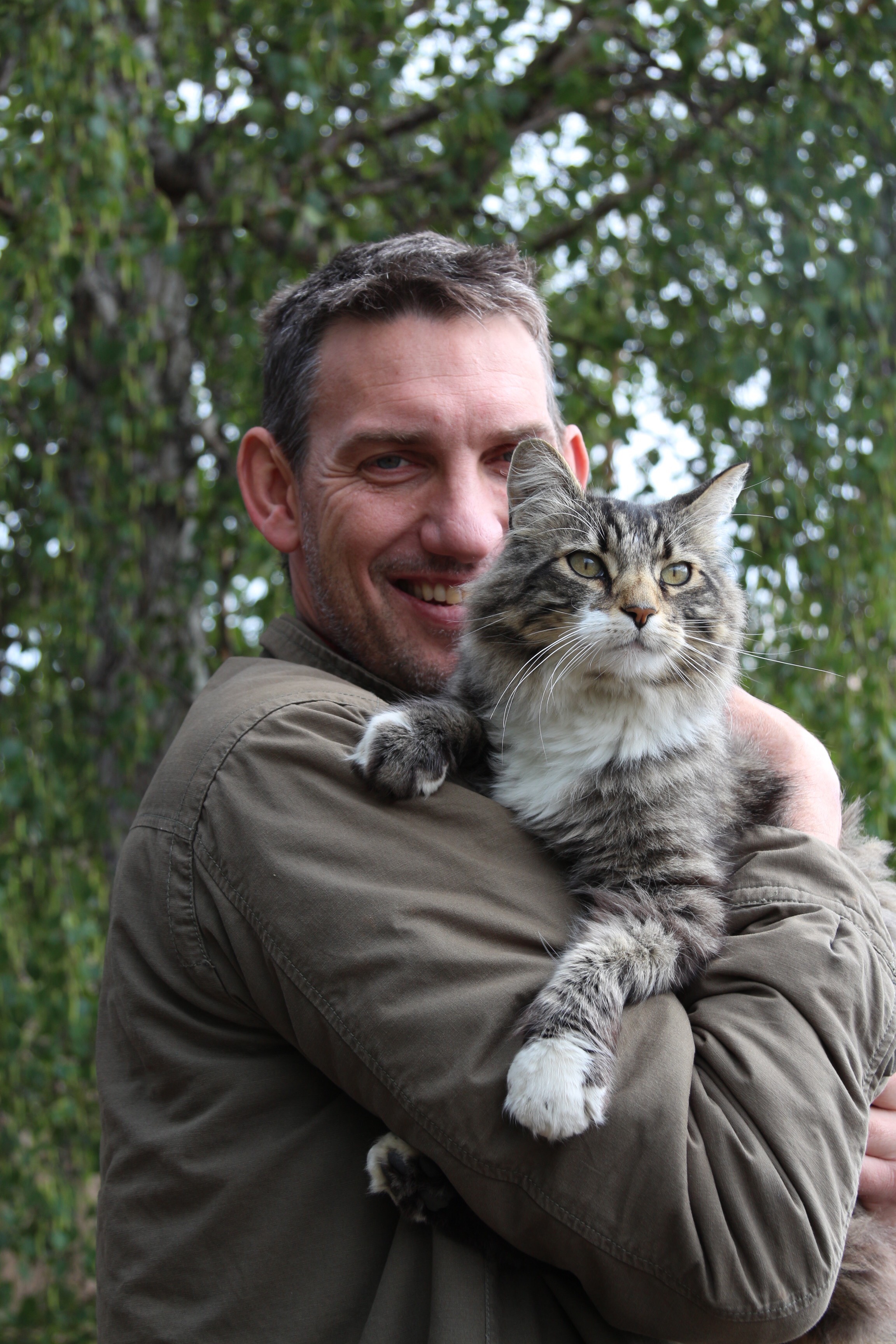 Here’s the Talkeeta airport cat I photographed in 2006. Same moggie or not? I’m pretty sure it is based on the smudging on the left cheek. So it was at least eight years older in the photo above. 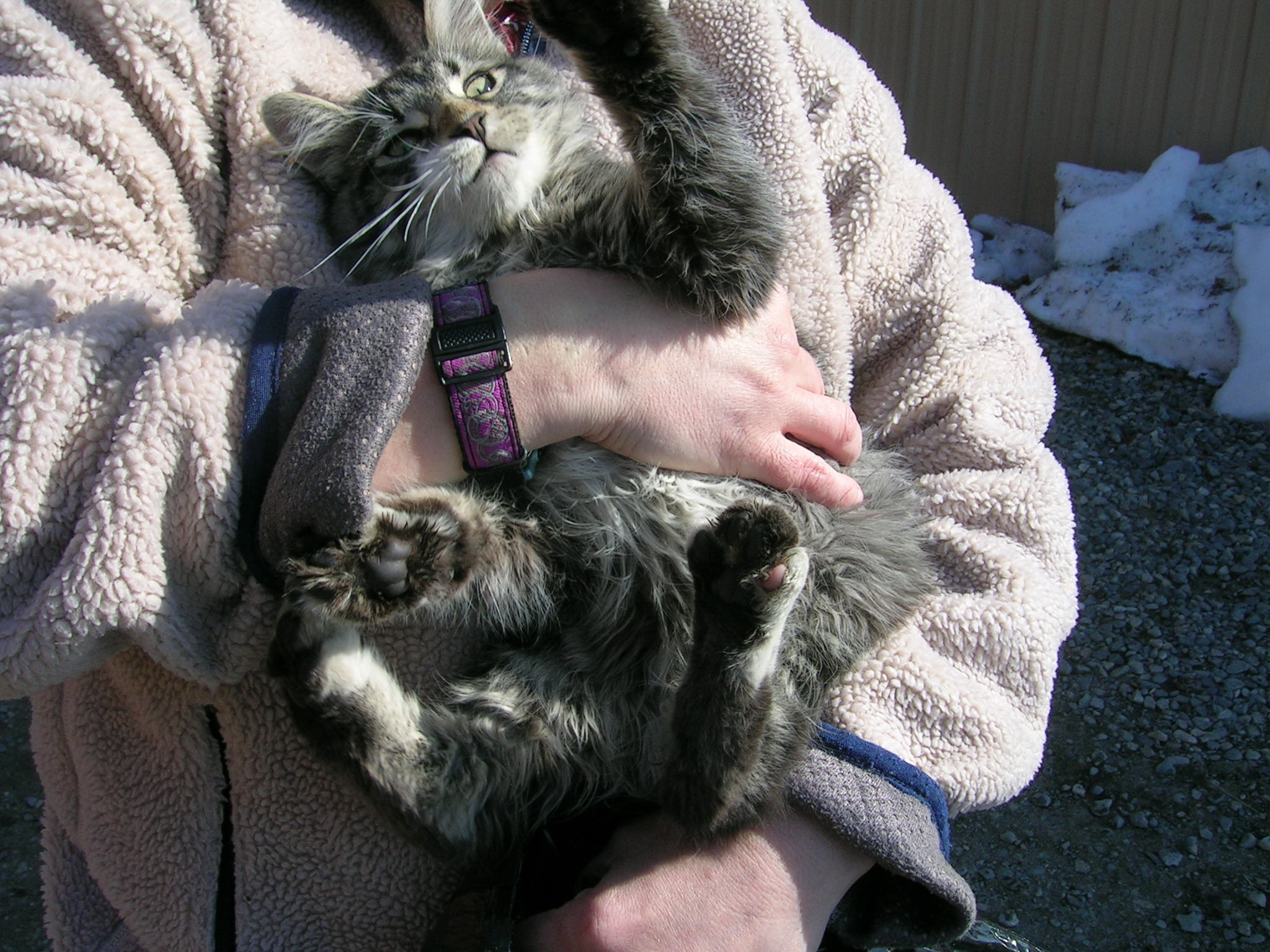 What does it take to make a pig's curly tail straight?
Just one finger… pic.twitter.com/5j6BB5CEkw

And I’m not sure of the language, but it looks as if moggies stepped in the dumplings. I don’t know the language. Translation, anyone?