UPDATE:  Several people have suggested that this website is a fake–that is, the pieces are satirizing extreme social-justice warriorism. It’s possible, but as Ben pointed out in the comments, it’s not good satire since it’s indistinguishable from the object it’s satirizing. In other words, it’s not pure satire but a hoax, designed to be misleading.

Now I’m willing to entertain the possibility that I’ve been taken in, and have written to the site asking if it’s a hoax. (Of course, why should I believe anything they tell me?). But if a reader can prove it’s a hoax, then I’ll send him/her/it/hir/them an autographed copy of either of my trade books.

Medusa, an online magazine whose masthead proclaims “Feminist Revolution Now”, seems like a version of Everyday Feminism for women a bit older: it aims to shame everyone who doesn’t conform to its rigid ideology, and is unabashedly Control-Left. (See, for instance, its recent piece calling Evergreen State College professor Bret Weinstein a racist who should be fired immediately for refusing to leave campus as a white man in the Day of Departure). But the article below, which at first I took to be a joke, is about the worst thing I’ve seen coming from intersectional feminism. The title of the piece by Nicole Valentine tells all; click on the screenshot to go to the article.

It’s blatantly racist, recalling the bad old days of eugenics, but of course the intersectional feminists will say that calling for white people to abort their fetuses to stop white hegemony is not racism, because “racism equals prejudice plus power.” I don’t buy that, and I don’t think anyone should buy into that, or allow anyone to discriminate on the basis of ethnicity just because they’re from an ethnic group lower down on the Ladder of Oppression. The ranking of The Oppressed is problematic anyway, for it actually puts Jews at the Unoppressed top, and where do you rank Hispanics versus Muslims? The right thing to do is decry bigotry in all its forms, while remaining conscious that some groups suffer a lot more from bigotry than others. But Valentine, whose Gravatar profile is below, wants to do what the Nazis did to those deemed inferior: stop them from giving birth. In this case, it’s through the abortion (presumably voluntary!) of white fetuses. 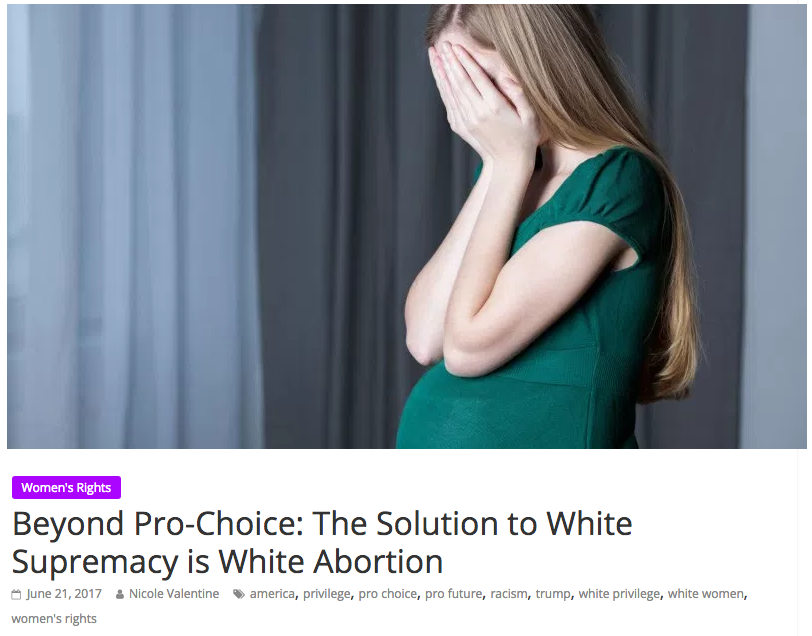 No, this is no joke. Valentine’s thesis is that white breeding “replicates the white family unit,” thus reinforcing white supremacy. White abortion solves at once the problems of too many white people in America as well as the hours white people devote to raising their kids, which could be used to assist women of color. Although a Pew Survey from 2015 shows that black and Hispanic families are already larger than white families, Valentine seems to want the average family size of whites to be zero (as she says in her piece, “the white family unit must be destroyed”). Here are the Pew data:

Okay, on to Valentine’s piece; I give a few quotes:

And the call to arms (or to Planned Parenthood), which says that white women who call themselves progressives, but have any kids, are hypocrites:

Of course, the best choice is to act preventatively to ensure that white children are not at risk of being born. But in circumstances in which termination and generation are the options, it is best to take advantage of your right to choose, and abort in favor of assisting women of color.

Of course there’s still racism in America, and we must remain aware of it and fight against it. You can see plenty of that racism on white supremacist and neo-Nazi websites, and I decry it in the strongest terms. But the difference between that racism and the views of Nicole Valentine, which aren’t that different, is that white supremacists are mocked and reviled by all thinking people, while Valentine’s racist and eugenics views are on tap in a progressive feminist website. Oh, the humanity! 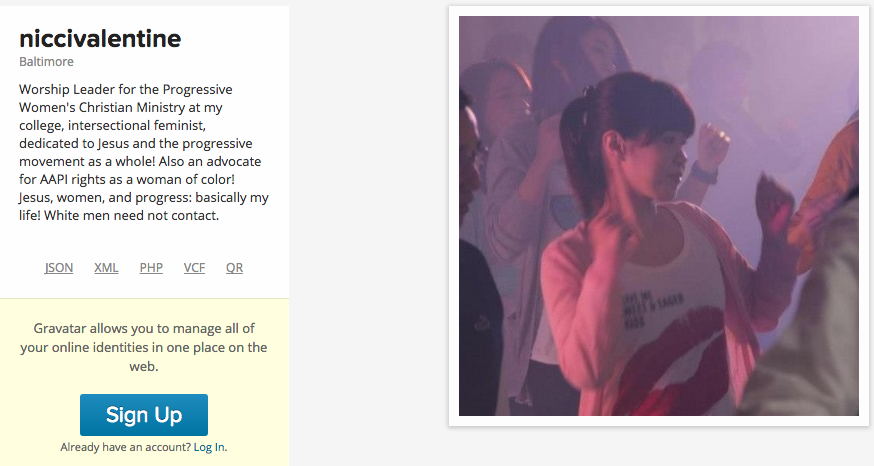