According to both the Guardian and The Independent, the Turkish government, with the approval of President Recep Tayyip Erdoğan, has just stopped the teaching of evolution in secondary schools, saying that students in the ninth grade aren’t able to understand the idea. Although—according to a friend who teaches evolution in a Turkish university—evolution is often left out of the secondary school curriculum (as it often is in the U.S.), now it won’t be offered in any secondary schools.

According to the Guardian, the announcement was made here, and if you understand Turkish, do tell us what this guy is saying (click screenshot to go to video):

Alpaslan Durmuş, who chairs the board of education, said evolution was debatable, controversial and too complicated for students.

“We believe that these subjects are beyond their [students] comprehension,” said Durmuş in a video published on the education ministry’s website.

Durmuş said a chapter on evolution was being removed from ninth grade biology course books, and the subject postponed to the undergraduate period. Another change to the curriculum may reduce the amount of time that students spend studying the legacy of secularism.

. . . The subject of evolution in particular stirred debate earlier this year after Numan Kurtulmuş, the deputy prime minister, described the process as a theory that was both archaic and lacking sufficient evidence. 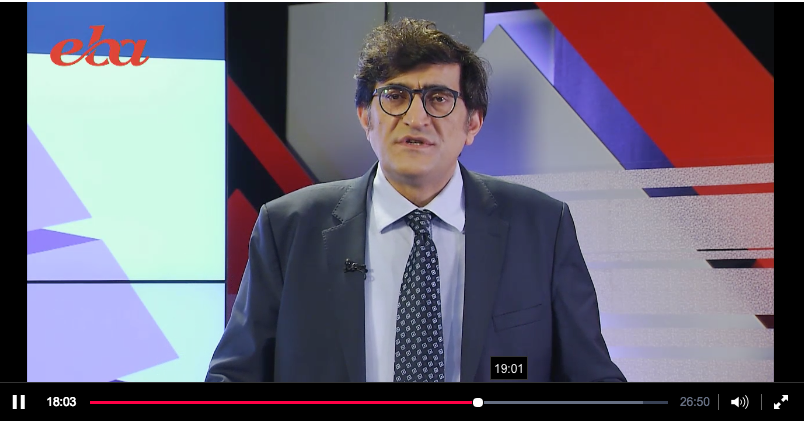 There is no doubt why this is happening: it’s part of the increasing Islamicization of Turkey by the theocratic strongman Erdoğan, who is increasingly demolishing the secular government set up by Kemal Atatürk in favor of Muslim habits and strictures. Besides arresting 50,000 perceived opponents, arrogating more power for himself, imposing more restrictions in alcohol, and reintroducing religious (i.e., Islamic) education in schools,Erdoğan’s now attacking science education.

Since the Qur’an states that humans were created like this:

And certainly did We create man from an extract of clay
Then We place him as a sperm-drop in a firm lodging
Then We made the sperm-drop into a clinging clot, and We made the clot into a lump [of flesh], and we made [from] the lump bones, and We covered the bones with flesh; then We developed him into another creation. So blessed is Allah, the best of creators.*

. . . and because many Muslims believe the Qur’an should be read literally, teaching evolution can be seen as anti-Islam, and few Muslim-majority countries teach it in secondary schools. (I once had a Turkish cab driver lecture to me about evolution and how the Qur’an says that humans were created, though he didn’t know I was an evolutionary biologist.)

The Guardian also reports that other secular aspects of the curriculum will be diminished, including downplaying the achievements of Atatürk, who would be spinning in his grave were he to see what Erdoğan is doing:

Reports in Turkish media in recent weeks, based on apparent leaks of school board meetings, have also predicted a diminished role in the curriculum for the study of Atatürk, and an increase in the hours devoted to studying religion. Durmuş said that a greater emphasis would be placed on the contributions of Muslim and Turkish scientists and history classes would move away from a “Euro-centric” approach.

The changes were based on a broad public consultation in which parents and the public played a key role, he said.

I weep for Turkey, a country I love. I was invited to Ankara this winter to speak about evolution, but didn’t go, and now I wish I had. Perhaps they’ll invite me again, and this time I’d be delighted to tell my audiences why evolution is TRUE.

*note that the words “developed him into another creation” could be taken as a kind of theistic evolution, but I haven’t seen Muslims, who usually don’t take the Qur’an as metaphor, interpret it this way.