A while back, Gwyneth Paltrow, who is among the world’s most disliked celebrities for her hauteur and insouciance, was selling jade “eggs” on her Goop website to insert into women’s vaginas. Unfortunately, the porous stone could cause infections, and doctors strongly warned against this practice.

Now she’s back with another quack remedy. Unlike the jade eggs, this one won’t cause any harm—except to your pocketbook.  The woo this time comprises “wearable stickers” that promote healing. No dope–seriously! Paltrow, undoubtedly for a cut of the profits, is pushing “healing skin stickers” from the Body Vibes site. Click on screenshot to see the woo: 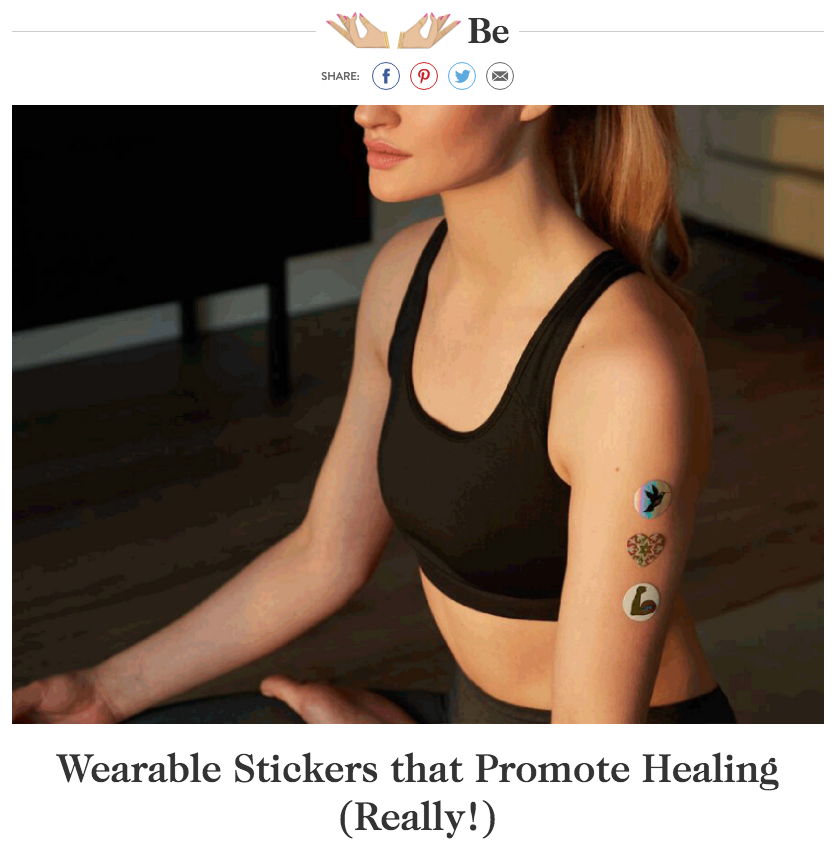 Gwynnie not only links to the Body Vibes site, but touts the stickers on Goop like this (my emphasis):

We’ve been geeking out about the healing power of energy recently (see our stories on earthing, and the fascinating research at the HeartMath Institute)—so it’s no surprise that Body Vibes, wearable stickers that rebalance the energy frequency in our bodies, have become a major obsession around goop HQ.

The concept: Human bodies operate at an ideal energetic frequency, but everyday stresses and anxiety can throw off our internal balance, depleting our energy reserves and weakening our immune systems. Body Vibes stickers come pre-programmed to an ideal frequency, allowing them to target imbalances. While you’re wearing them—close to your heart, on your left shoulder or arm—they’ll fill in the deficiencies in your reserves, creating a calming effect, smoothing out both physical tension and anxiety. The founders, both aestheticians, also say they help clear skin by reducing inflammation and boosting cell turnover.

P.S. Leaving them on for the prescribed three-day period left a few goop staffers with marks on their skin, so be careful to stick them somewhere concealable if you’ve got an event coming up.

Jebus! What woo I see before me!

If you click on the link about “earthing,” you learn that walking around barefoot will “ground” you, like an appliance, and allow the electrons of the Earth to flow into your body through your feet, neutralizing all those nasty free radicals that can hurt you. And you can buy “earthing” yoga mats, shoes, and even sheets so you can sleep grounded. Of course, they’re not cheap: 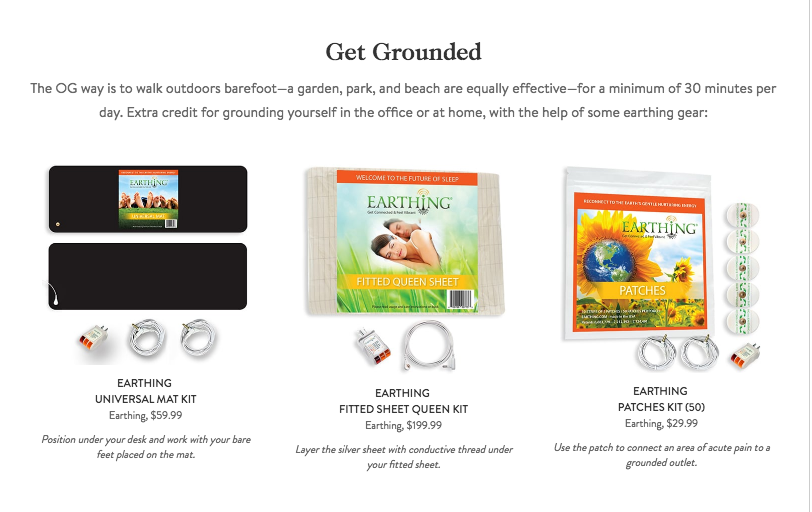 Here are some of the stickers, which, as the video below will tell you, have been pre-tuned with different frequencies of “bio-energy” that will seep into your body and cure any number of ailments: 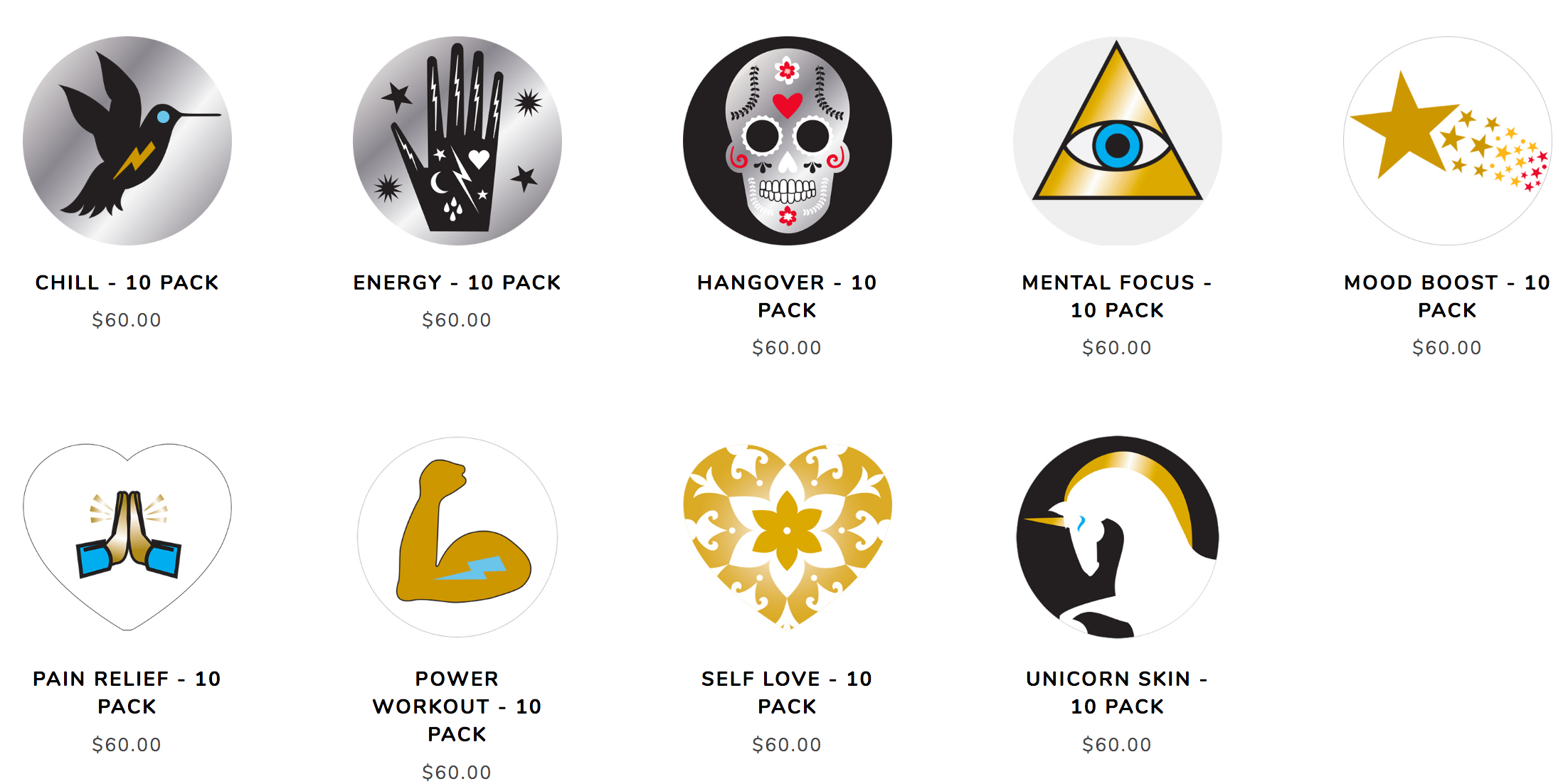 Since they’re $6 per sticker, and the woman above is wearing three at a time, and you’re supposed to wear them no longer than three days, a month of this quackery will cost you about $180 (Goop is not cheap!)

If you want a laugh, listen to this eight-minute video of Richard Eaton explaining how these stickers can imbue your body with bio-energy. I’ve never heard such bullshit in my life.

The Goop website used to have, along with the description above, these words in bold:

“Body Vibes stickers (made with the same conductive carbon material NASA uses to line space suits so they can monitor an astronaut’s vitals during wear) come pre-programmed to an ideal frequency, allowing them to target imbalances.”

Well, Gizmodo contacted NASA and found out that’s just a lie (the phrase is now gone):

A representative from NASA’s spacewalk office told Gizmodo that they “do not have any conductive carbon material lining the spacesuits.” Spacesuits are actually made of synthetic polymers, spandex, and other materials that serve a purpose beyond making their wearer look like a resident of Nightmare Coachella.

Gizmodo has asked Body Vibes to provide us with the peer-reviewed research that supports their claim that their “astronaut” stickers have any impact on the human body. We’ve also asked Body Vibes and Goop for their response to NASA’s assertion that they definitely do not use a “carbonate material” to line their spacesuits. So far, no luck on either front.

As for the bio-energy in the damn stickers, a NASA guy took down Eaton, too:

“Without going into a long explanation about the research and development of this technology, it comes down to this; I found a way to tap into the human body’s bio-frequency, which the body is receptive to outside energy signatures,” Eaton told Gizmodo. He added that, conveniently, “Most of the research that has been collected is confidential and is held as company private information.”

Shelhamer reiterated that space suits are not lined with carbon material, and that even if they were, it would be for adding strength to the suit—not for monitoring vital signs.

This is homeopathy for the rich. The real reason to dislike Paltrow is not her smugness, but her constant preying on the credulous, charging them tons of money for useless New Age “remedies” on her Goop website. Have a look around if you want to see how she enriches herself by bilking people.