I haven’t posted much on free will lately, and I’m sure that’s fine with the compatibilist readers who think my take on the issue is, as the Brits say, “badly wrong.” I stand by my views, and apparently so does Zack Weinersmith, who published “Compatibilism: a parable” on his SMBC comic site.  (Thanks to several readers who sent it to me.)

For new readers, compatibilism is the view that complete determinism of our acts by our genes and environments is still compatible with a view of humans having “free will.”

To wit (note that the purveyor of the semantic trickery about free will strongly resembles Dan Dennett, one of compatibilism’s chief exponents), a very sophisticated comic strip!:

As best I can see, and I’m prone to misinterpreting these things, the kid sees compatibilism in the second half of the strip as he saw his disappointment over the possibility of seeing “dinosaurs” in the first half: he was misled into thinking that he’d see something different from what he thought. “Free will” is the dinosaur here, and, like the bird, it turns out, under compatibilism, to be something other than what most people think.

As one reader noted, if you press the red button at the bottom of the screen, you get this: 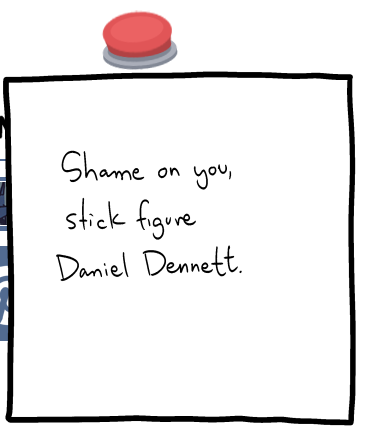 And if you hover your mouse over the second bit, you get this: 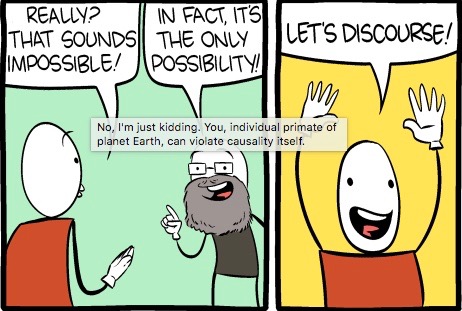 182 thoughts on “Compatibilism: a parable”