The first video we have for your delectation is one of cats being brave or foolhardy, or both. Don’t try these at home, kids. And try to keep your kittens away from alligators. That rarely ends well.

A cat gets massaged with an electric toothbrush. In my opinion that’s not exactly how “massage” works, but the cat doesn’t seem to mind. I’m guessing the sound from the toothbrush is close enough to a purr to feline ears.

Then there’s this heart-warming story of swimming kittens rescued by fishermen. They have since been adopted by a family with two little girls, were named Warrior and River, and lived happily ever after.

And finally, to show that Trump understands the dignity of his office and that caricature is an essential and necessary part of a healthy democracy; the International Business Times brings us this story: Trump sends cease-and-desist to 17-year-old student over cat website. The student has created a website where users can use cat arms to bat and claw the head of Trump. It’s incredibly tame. The response from the President’s legal team has been incredibly lame. She has changed the site name, but apparently the legal team is still not satisfied:

It was not clarified what demands Trump’s legal team wanted from her. Lucy still hasn’t responded to Trump after changing her website’s name. She and her lawyer are still waiting for Trump’s next move.

The site in question is this one: http://www.kittenfeed.com/ (beware the Rickroll) if you wish to try it out for yourself. 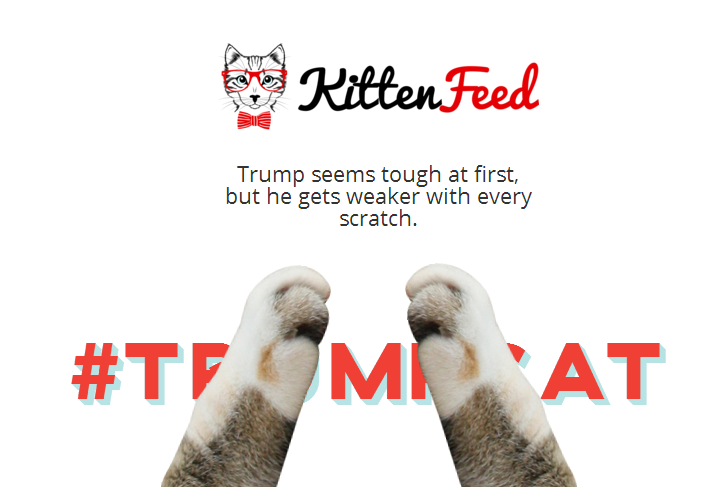