The big news in New Zealand is that Sirocco, the most famous kakapo (Strigops habroptilus, the world’s only flightless parrot, a bird endemic to this country) has gone missing; or rather, his radio band slipped off his leg. But no worries—this has happened before. It’s his 20th birthday, though, and if they don’t find him he’ll miss his party!

Sirocco is famous for being the star of one of the best YouTube animal videos: “Shagged by a rare parrot,” in which Stephen Fry and zoologist Mark Carwardine visited New Zealand to see kakapos, and Sirocco came out of the forest to indulge in a little hanky-panky with Carwardine’s head.  Ten to one you’ve seen this video before, but it’s worth revisiting (it’s from the BBC Two “Last chance to see” series about vanishing animals).

These adorable parrots are almost all confined to an island to protect them from predators; here’s another picture of Sirocco. Isn’t he cute?? 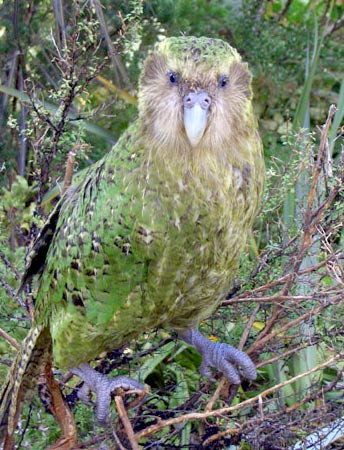 25 thoughts on “Sirocco the kakapo is missing”