That new word is “woke,” and the Urban Dictionary defines it with some accuracy (and snark): 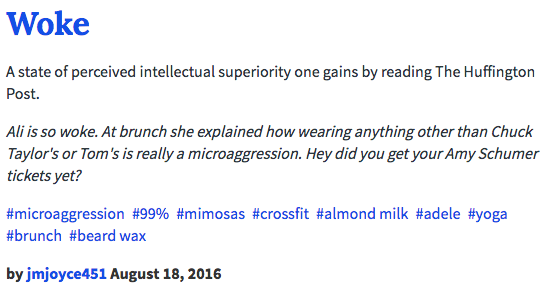 In other words, it denotes a state of ideological purity that agrees with the speaker’s views. It’s equivalent to calling yourself a “bright.”

For a more long-winded and arrogant explanation of the word, head over to Raven Cras’s piece at Blavity, “What does it mean to be woke?”  At first I thought it was a joke, but I don’t think so. It starts like this:

The phenomenon of being woke is a cultural push to challenge problematic norms, systemic injustices and the overall status quo through complete awareness. Being woke refers to a person being aware of the theoretical ins and outs of the world they inhabit. Becoming woke, or staying woke, is the acknowledgment that everything we’ve been taught is a lie (kind of/mostly). Woke(ness) provides us with a basic understanding of the why and how come aspect of societies’ social and systemic functions. The phrase itself is an encouragement for people to wake up and question dogmatic social norms.

. . . the piece goes downhill from there.

Feel free to comment on the neologisms you most dislike; that’s always a lively and curmudgeonly discussion!

152 thoughts on “Are you woke?: The neologism I hate the most”