Mark Sturtevant sent a bunch of insect photos, and he’s a specialist in great arthropod pix. His notes are indented:

There are 16 pictures in this batch, and I have 6 or 7 more batches in the queue. Hope you like insects!

I spent some time watching a thriving colony of aphids on sunflowers that we grow in our garden. These seem to be Uroleucon nigrotuberculatum, or something very close to that. During most of the summer the aphids are all female and they reproduce by parthenogenesis, giving birth to live offspring. Watching a colony for just a few minutes, I could generally see at least one aphid being born. The first several pictures show the tail end of a birth. At first, the baby is still wrapped in an egg membrane that is too thin to be visible here. The membrane splits away after several minutes, and the legs are free. As the mother lowers her body, the teeny legs stretch for the substrate, and then. . . touchdown! After this, the mother raises her abdomen and proceeds to completely ignore her tiny clone standing behind her.

Unless aphids are tended by ants, most aphids in a colony will be found facing the same direction. My hypothesis, which is mine, is that this is because they are born facing in the same direction as their mother, and they just don’t turn around.
Many predators and parasites live among the aphids. For example, I saw quite a few syrphid flies hovering about, dropping off eggs. On more than one occasion a small Crabionid wasp would zip in and carry off a bright red aphid in her jaws. These will be used to provision her larder for her larvae. 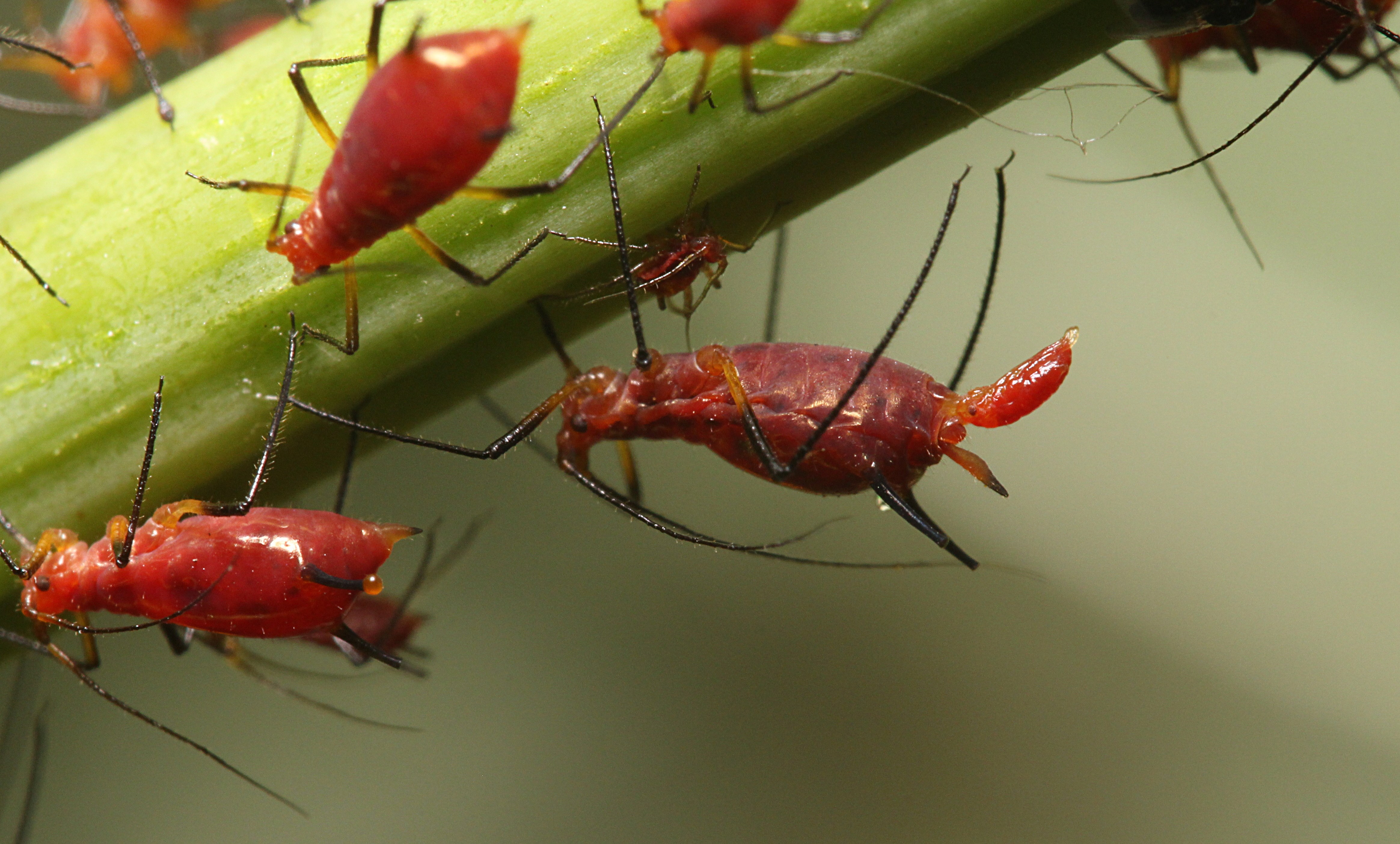 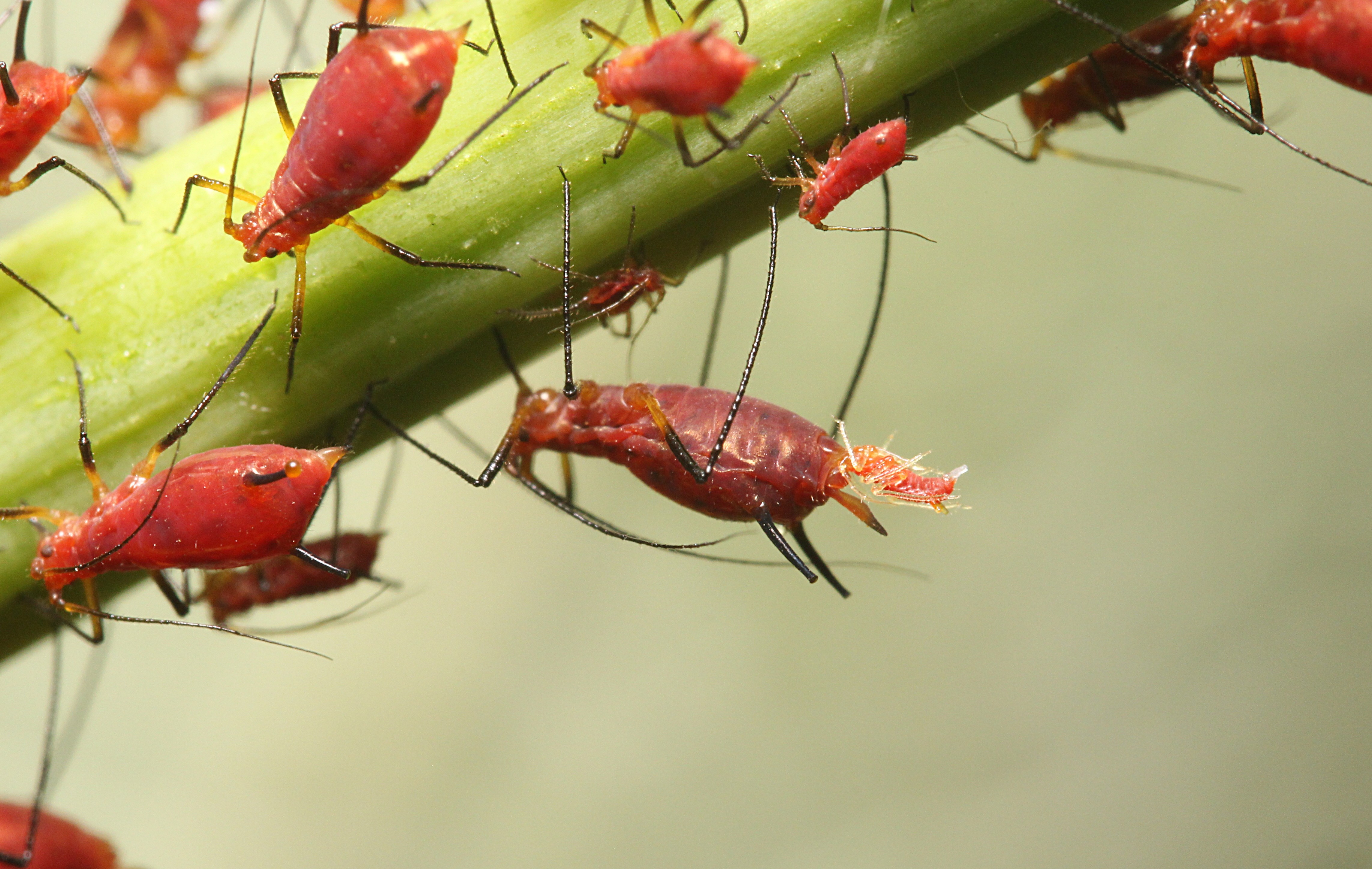 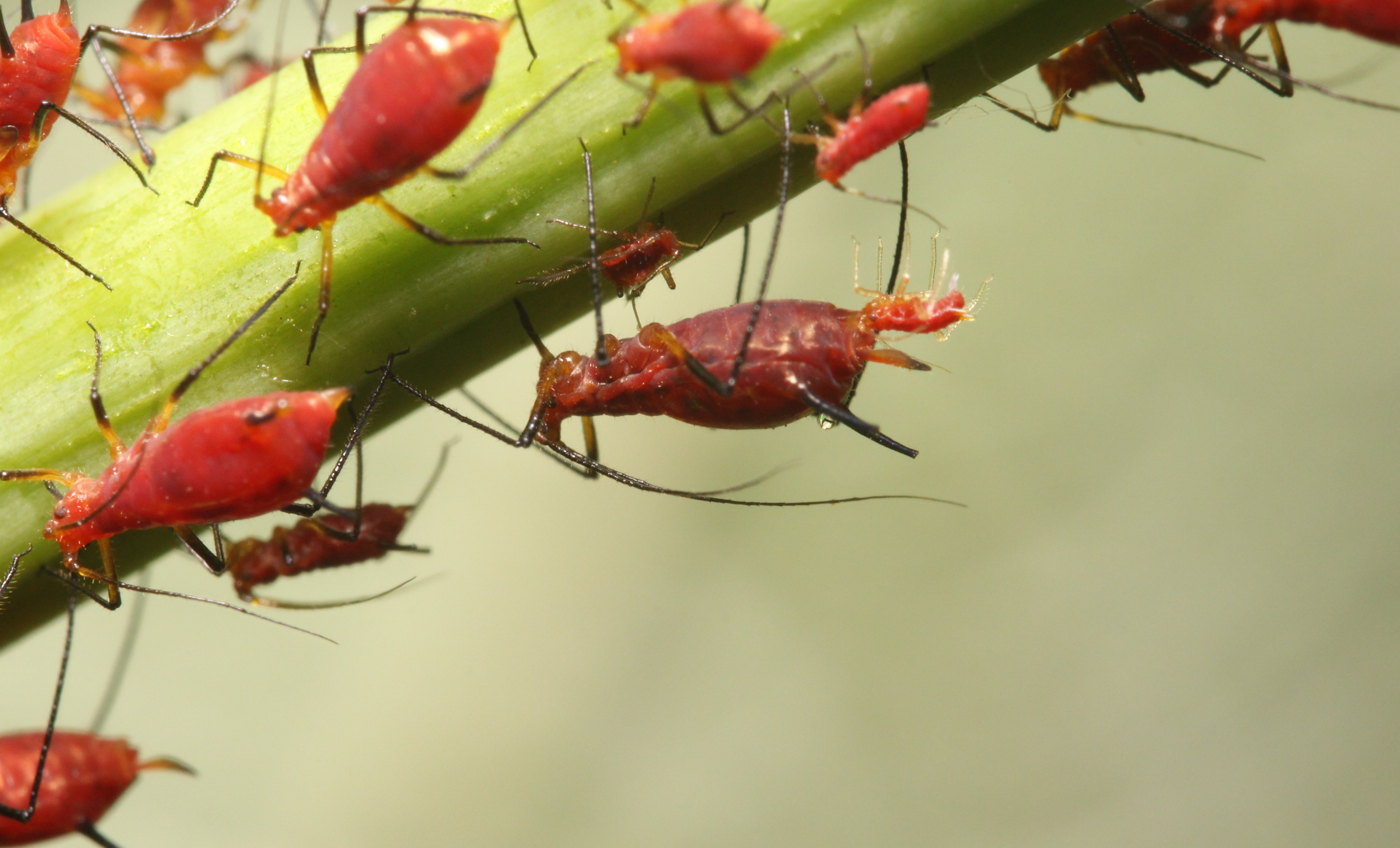 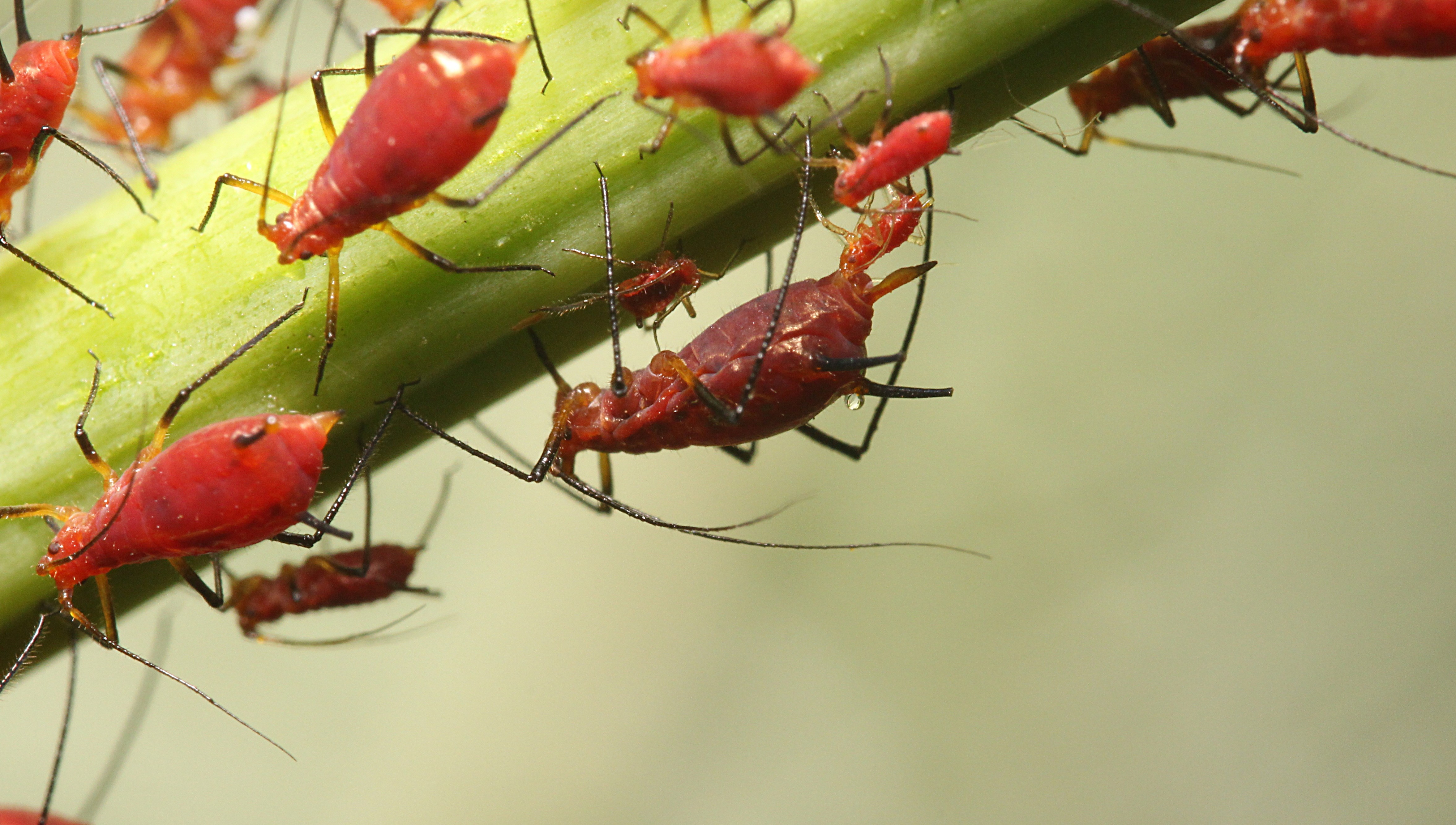 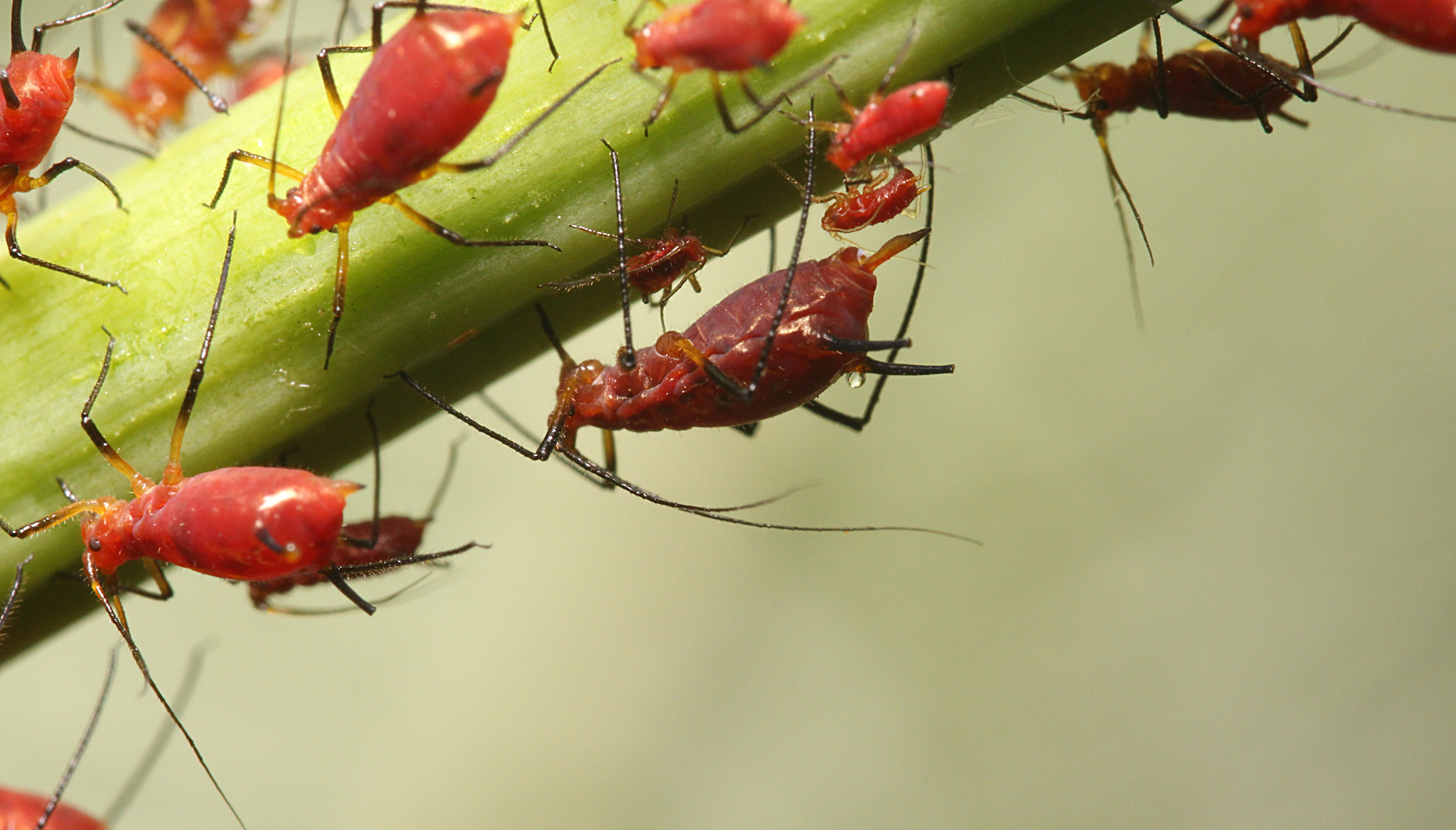 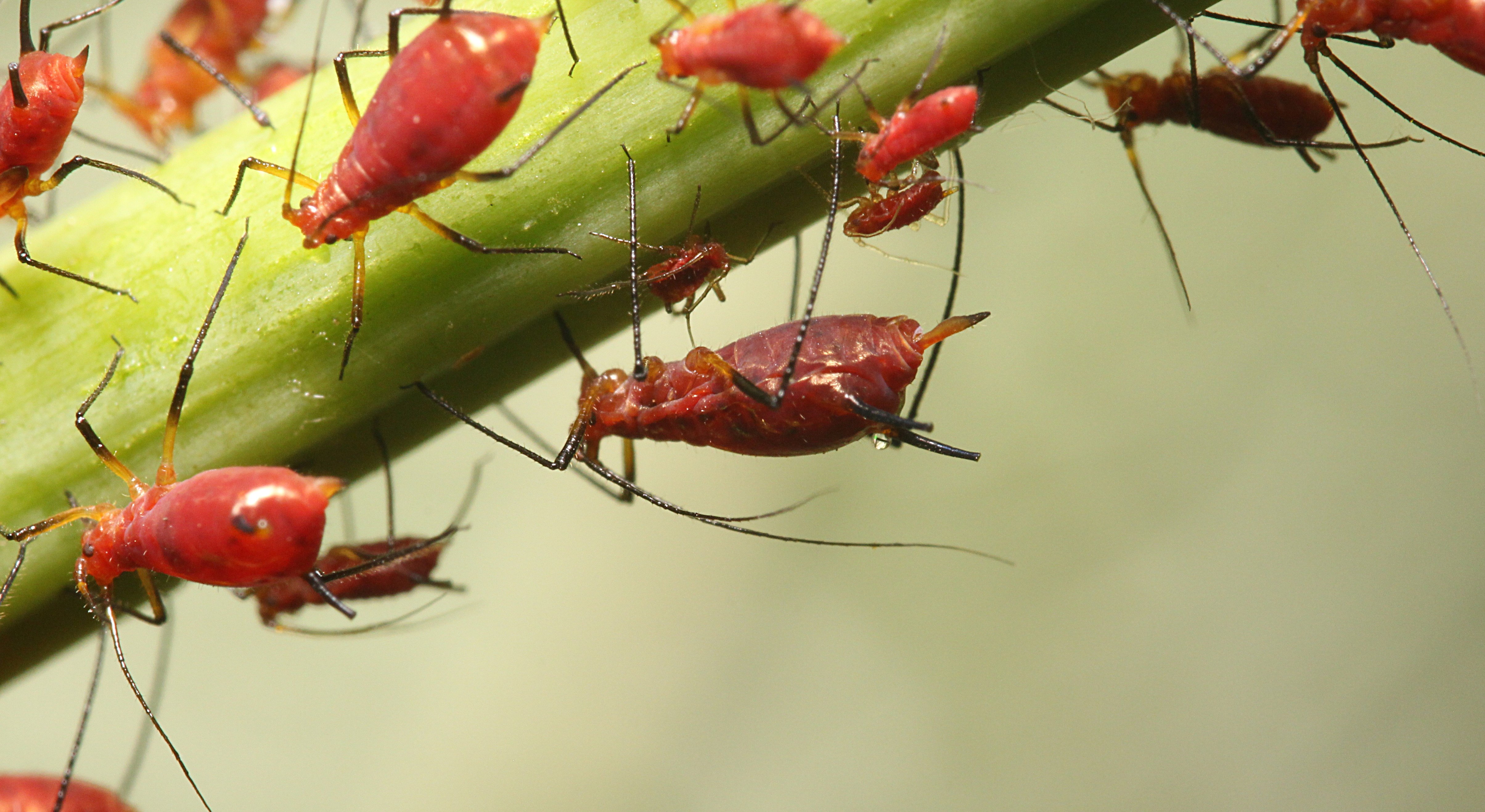 The next picture shows a giant among the aphid predators. This is our largest ladybug, the fifteen-spotted ladybug (Anatis labiculata). 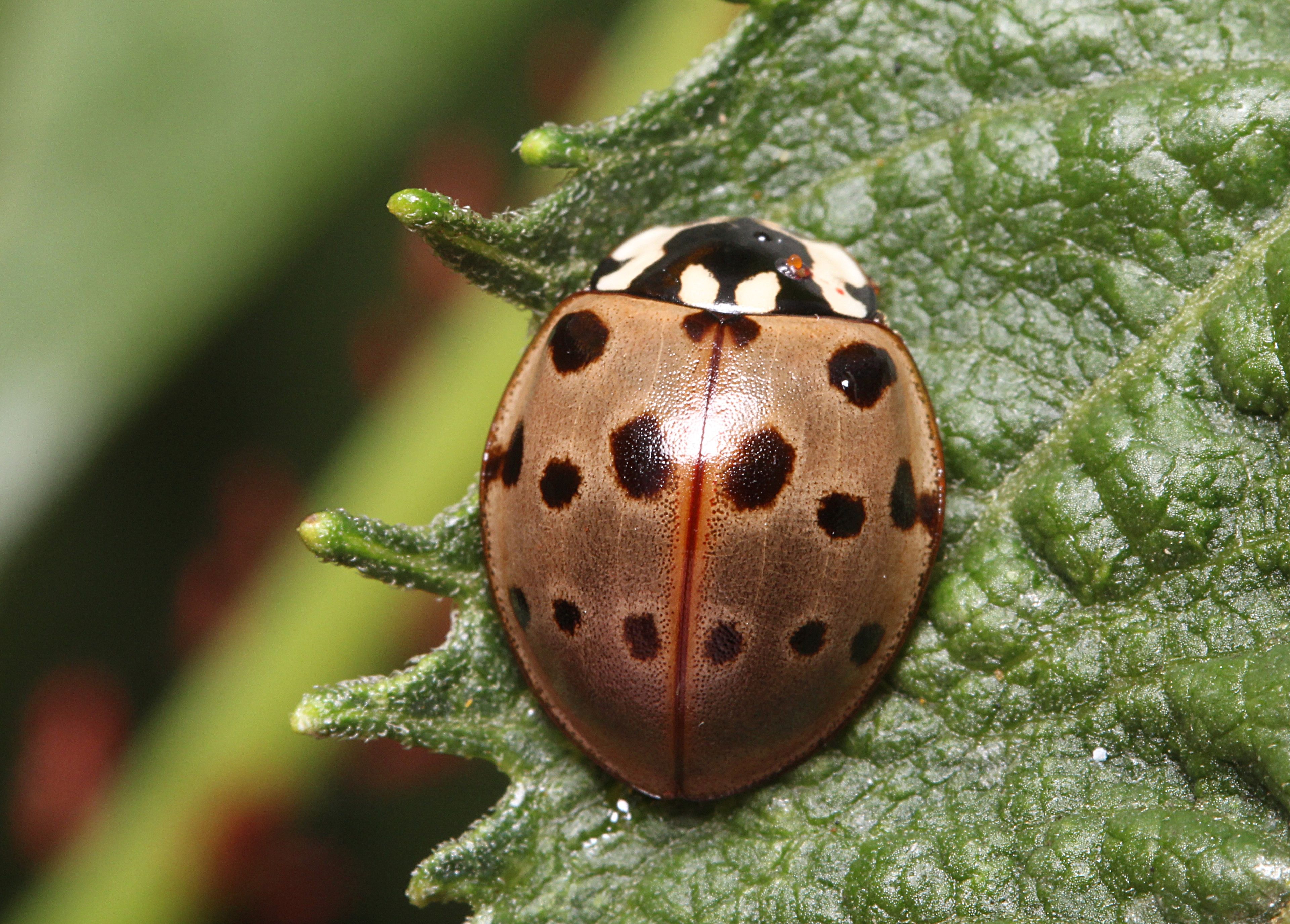 Next is another brightly colored beetle that I found in a forest. This is a banded net-winged beetle (Calopteron terminale). Like the ladybug, these beetles are not palatable, and so they advertise the fact with their warning colors. This kind of net-winged beetle scarcely looks like a beetle, with its soft wing covers. They are part of a mimicry complex with several other insects that include other beetles, and members of other insect orders. 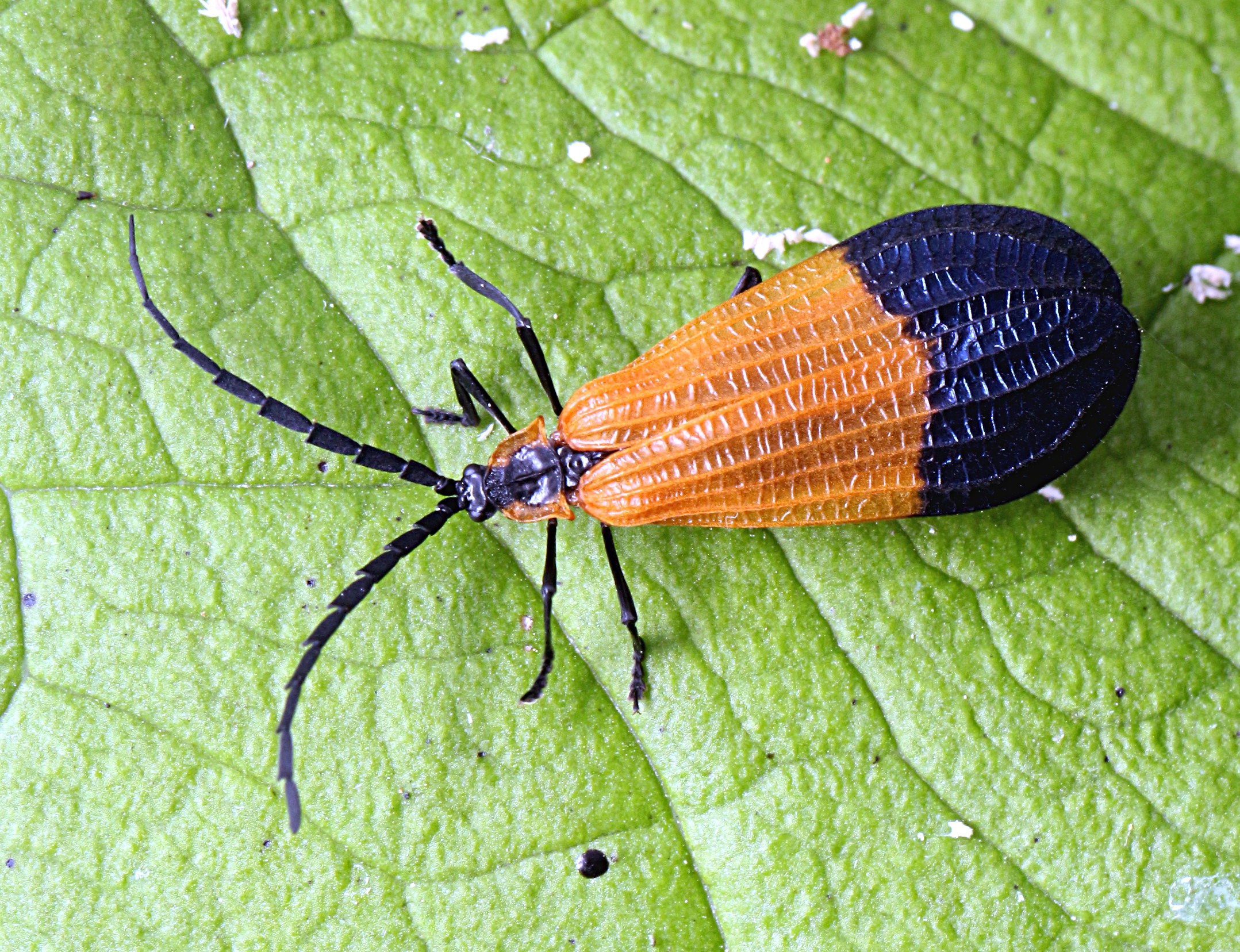 The next picture is a slender robber fly, Dioctria hyalipennis. 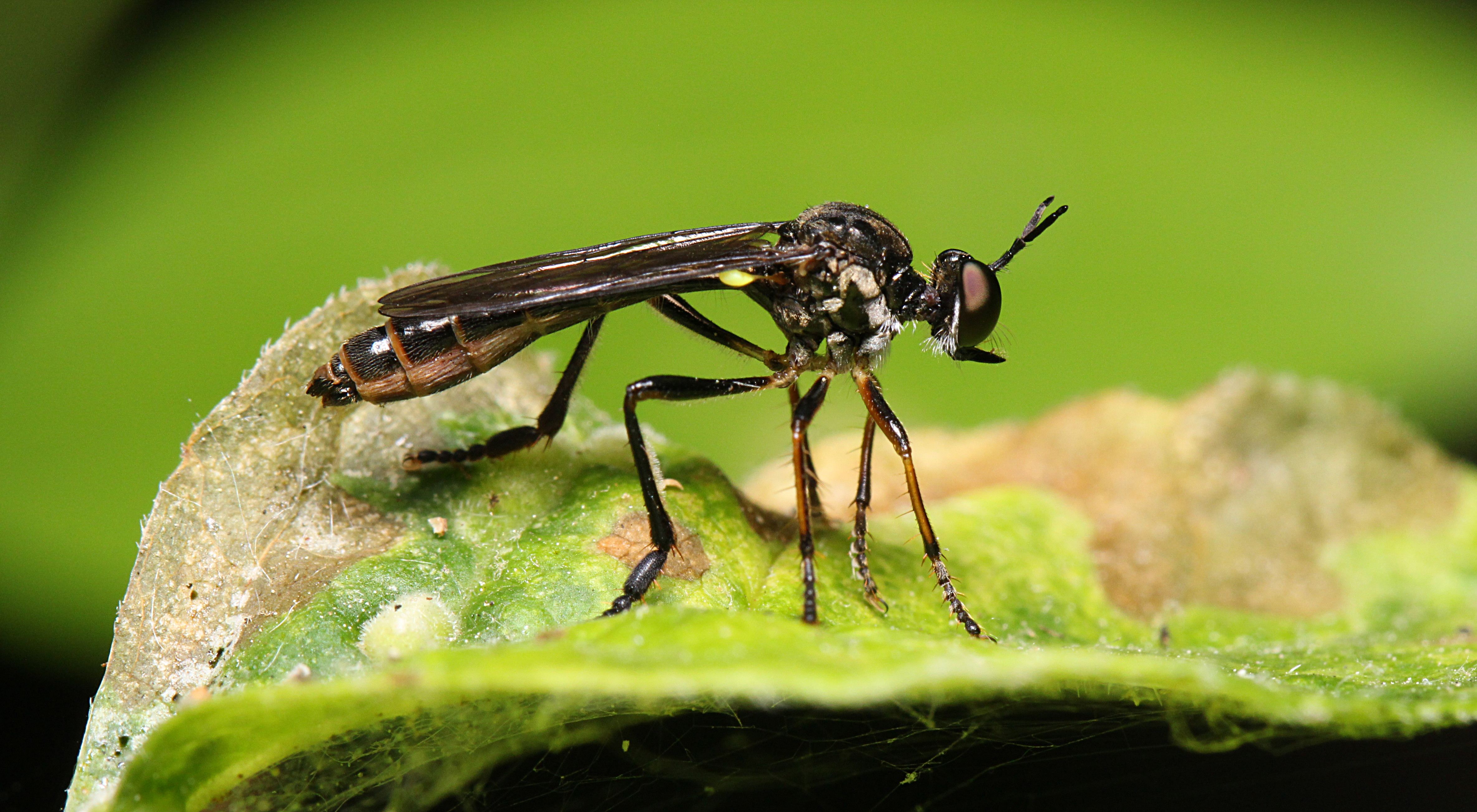 Next is one of our butterflies, the Northern pearly-eye (Enodia anthedon). These largish butterflies are fun to stalk as they flit erratically through wooded areas and then suddenly dive for a landing spot under cover. One has to sneak up on them pretty carefully to get close enough for a picture, and more often than not they will take off before I can get close enough. But they are highly territorial, and so I generally just have to stand still and there is a good chance they will come zipping by again before long so I can have another go.
Although they are brown all over and lack structural iridescent colors, their wing pattern has similarities to the related but much larger morpho butterflies. (See here, for example.) Also like their spectacular cousins, the pearly-eyes almost always sit with their wings tightly closed. I have seen dozens, but not once have I seen them resting with their wings open. 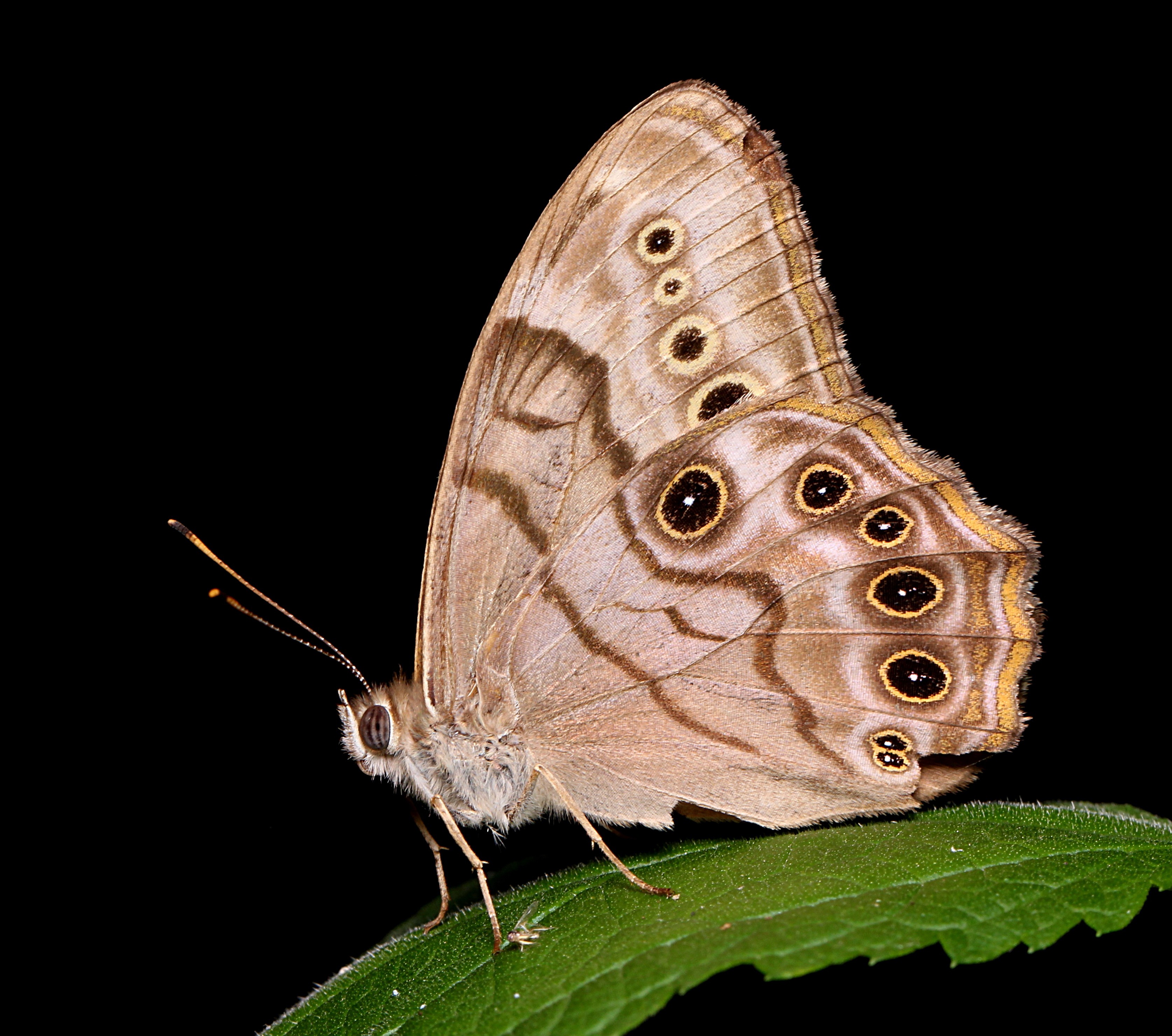 Dragonflies are often given cool names like skimmers, cruisers, and hawks. One day I was hunting with my camera and I saw a large dragonfly settling under some tree branches. I crept in for a picture with my zoom lens, and I could only get this one picture before it took off. This is called the shadow darner (Aeshna umbrosa), aptly named because of its habit of lurking around tree canopies. Unlike some of the big Aeshnid dragonflies, this species is not above actually landing for a spell so someone might get a picture. 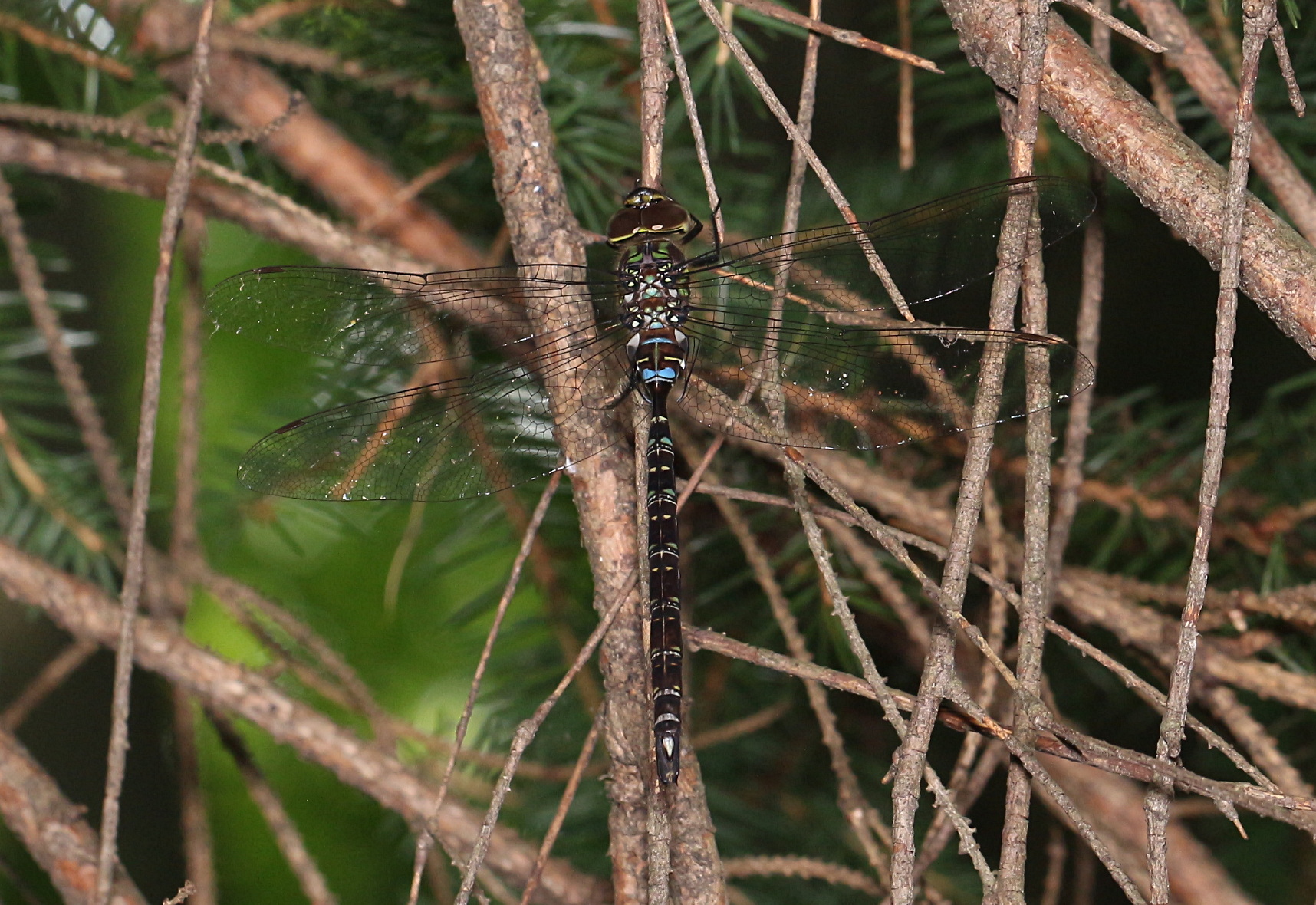 In the next picture I show another meeting with one of these dragonflies in a different field. This one must have recently emerged as an adult because it had little inclination to fly, and I could get very close for pictures without a problem. 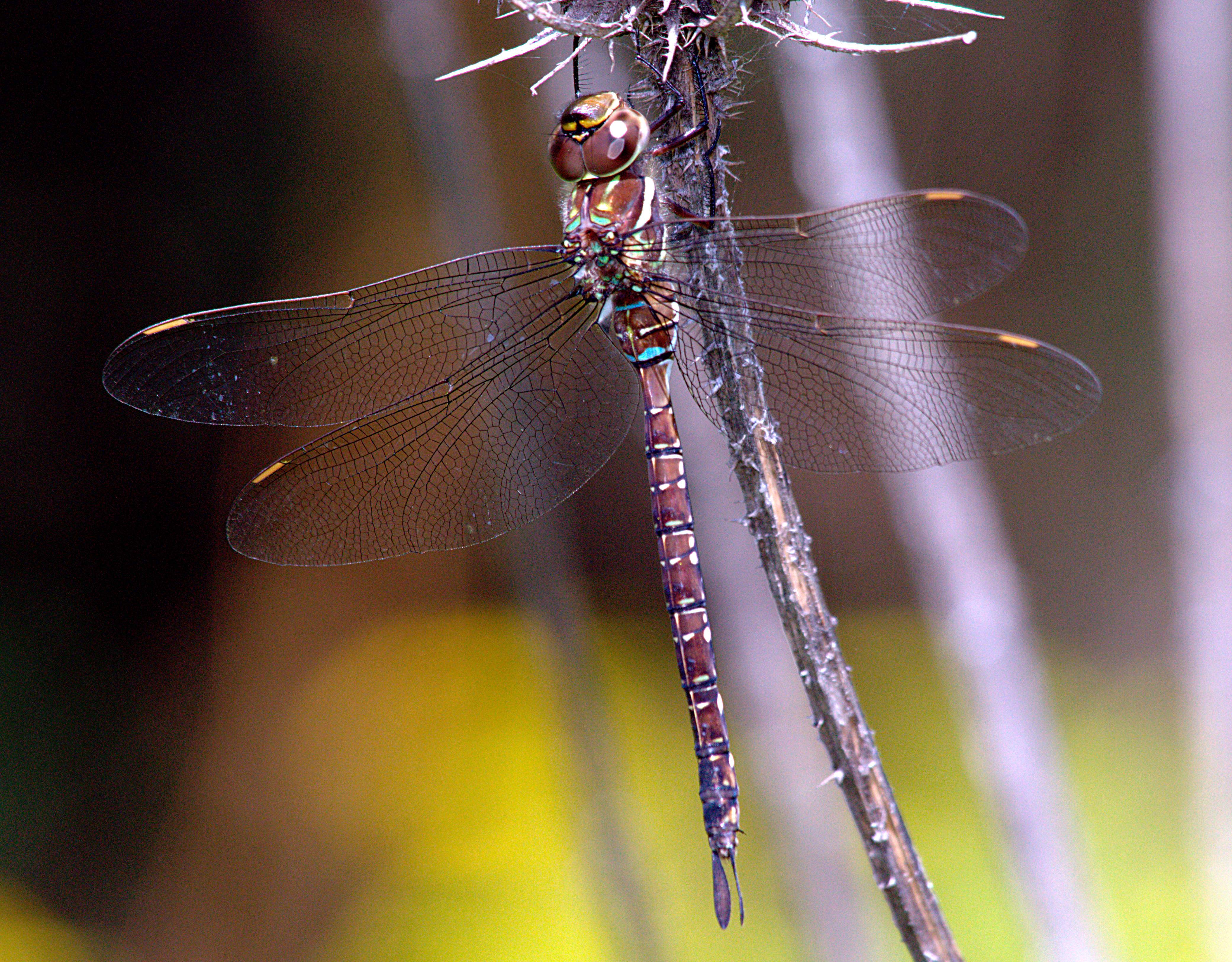 But sometimes I just do not make good choices with the camera settings, and I was not that happy with any of the pictures that I took of this dragonfly. So I returned over several days to its territory for another attempt. We saw each other often, but now it was fully developed and I could never get quite close enough for a picture. On one of these outings, feeling rather frustrated about not being able to get this picture, I chanced to look straight up. It took several seconds for my frontal lobes to comprehend what I was seeing, but once they did I completely… forgot… about… dragonflies. The next picture shows why.

This, people, is of course an enormous Chinese mantis, Tenodera sinensis, that was hanging about 8 feet over my head. I fortunately always go out with a butterfly net and insect cage just in case, and so I was able to retrieve her and bring her home. 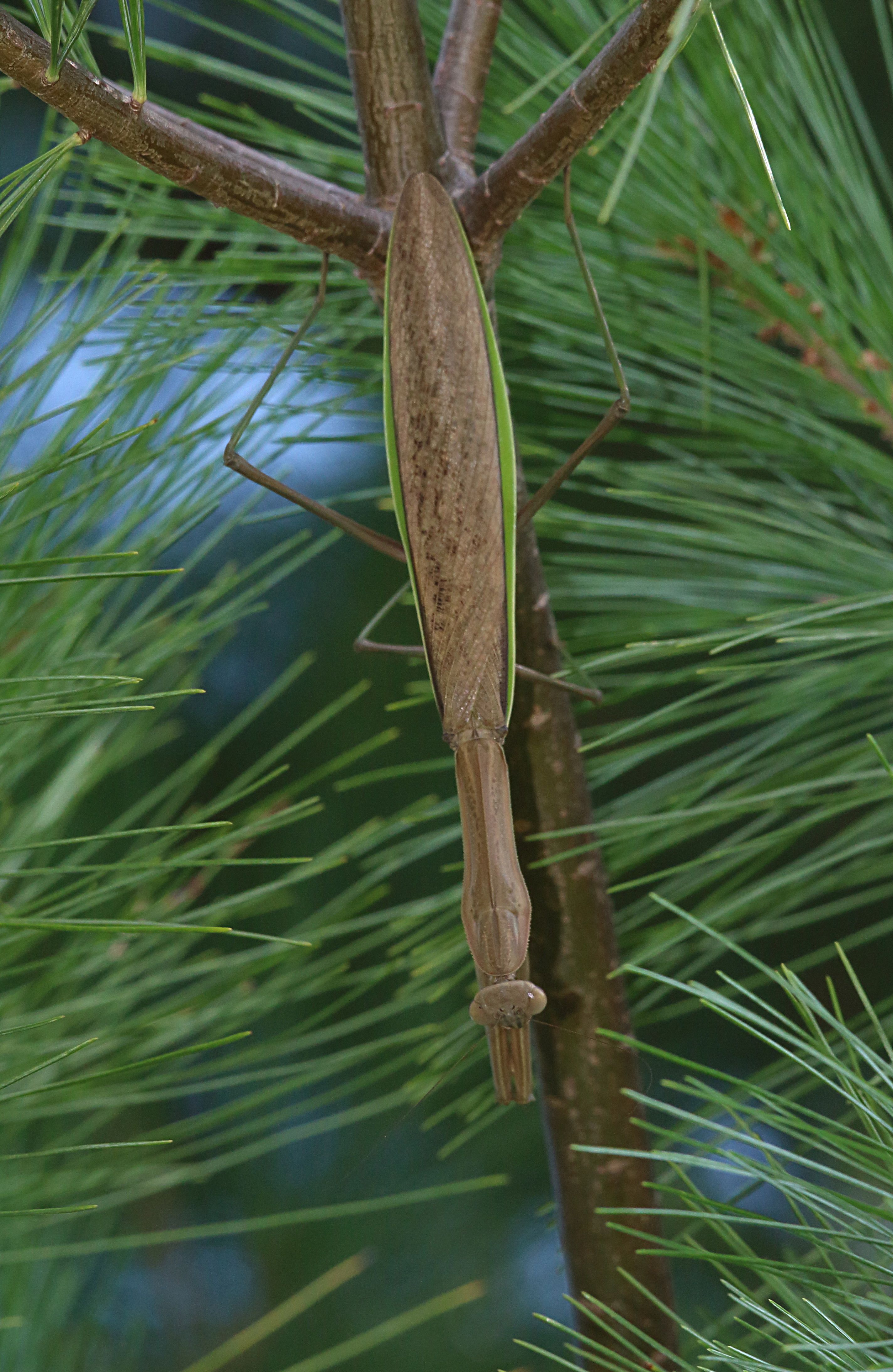 The next picture shows this awesome insect. These mantises vary in size, and she was as big as any I had seen. I called her Miss Mantis, and she and I had a lovely fling late in the summer for about a week before I released her in the same field that she was found. During our time together I fed her well and took many pictures. But those will have to wait for another day. 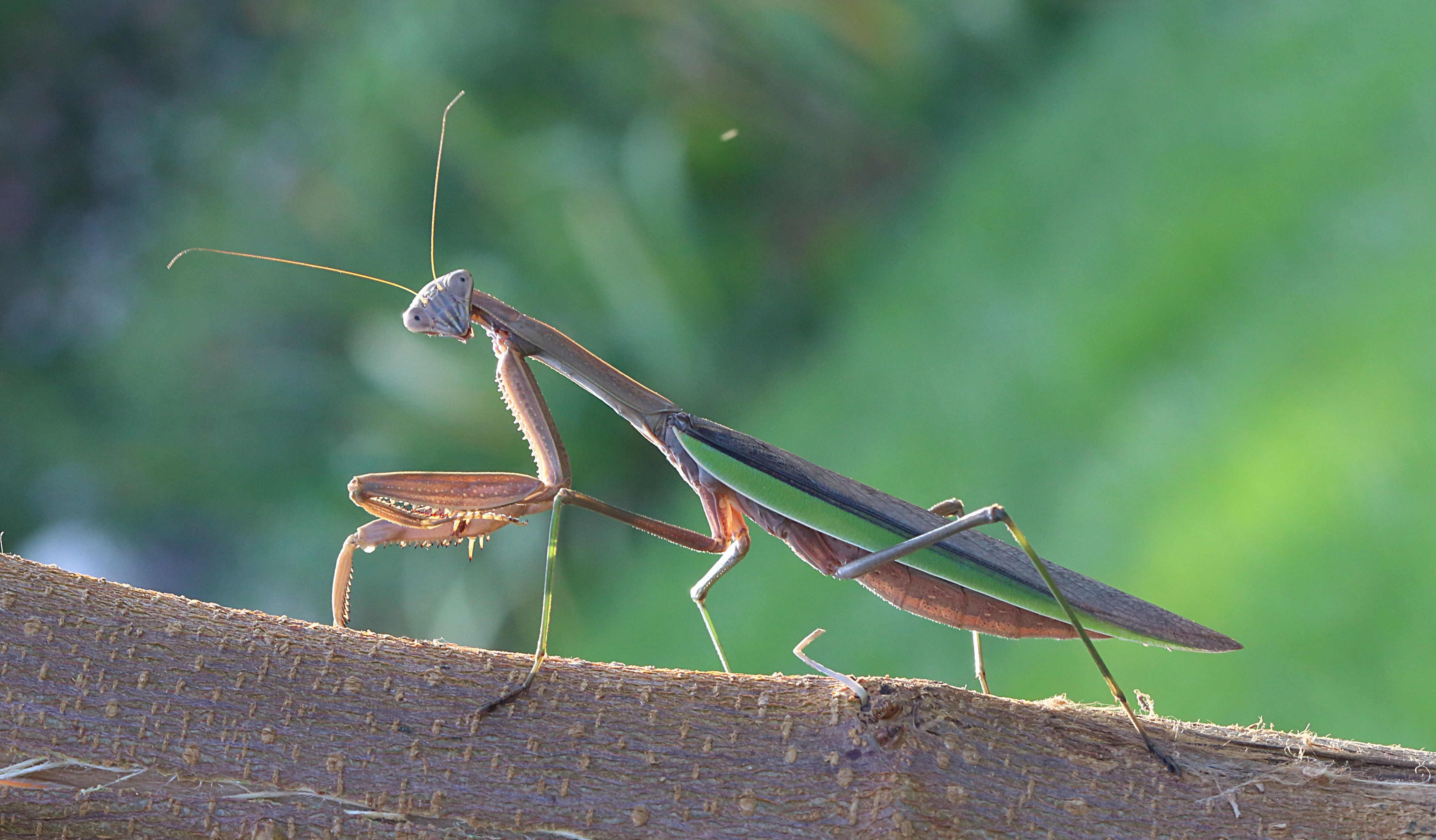 The last two pictures are ones that I had taken in October when the season was quickly winding down and there were far fewer chances for buggy adventures. I had snuck out after work to a lake nearby, and on that trip I finally noticed that the numerous, low-growing and small flowers called purple asters were worth attention. These flowers, which are eye-popping in their own right, are also very attractive to bees. Beside the lake I found a big patch of them, and it was swarming with equally colorful halictid bees (Agapostemon sp.). The combination of flower and bee colors was simply crazy, but I could not stay long because it was getting late and I needed to chase a big dragonfly. That delay stretched out for two weeks, and by the time I returned the flowers were spent and the bees were gone and it was getting colder. My season was ending, but that is okay because I have many new plans for next season. 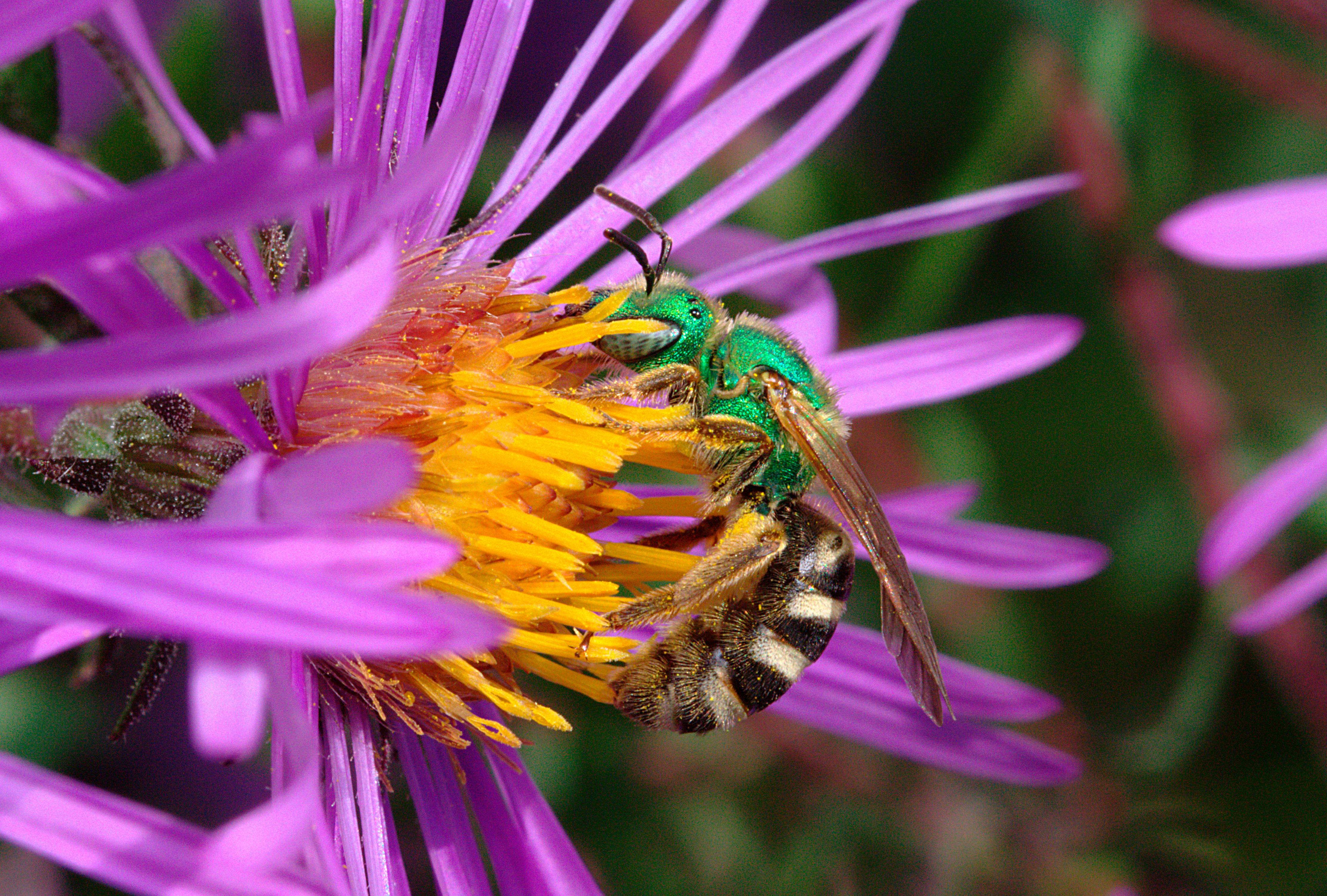 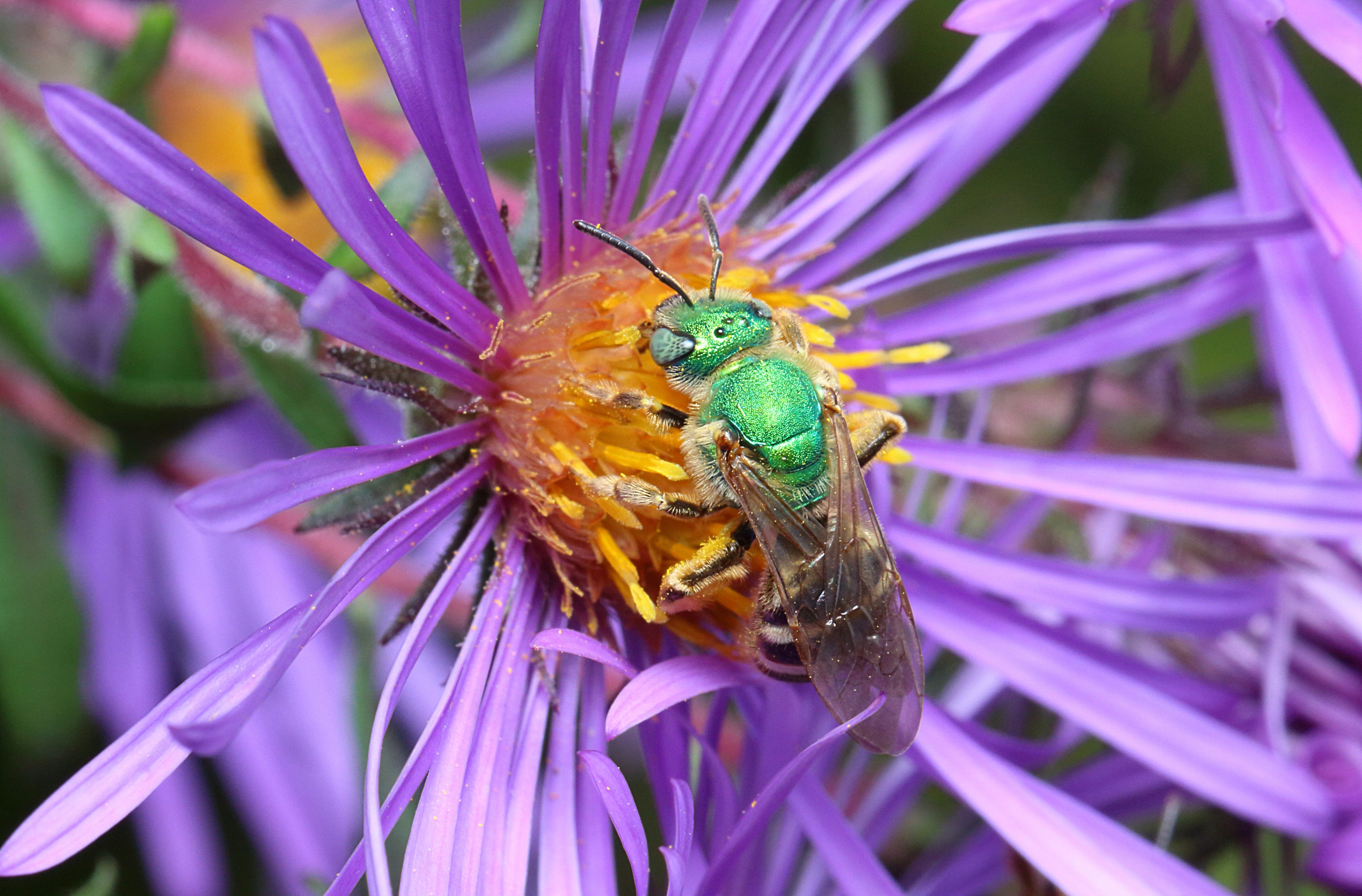