A few days ago I was interviewed by Eva Botkin-Kowacki, a science writer for the Christian Science Monitor. She wanted to discuss a new paper on speciation in birds, a commentary published in The Auk by Geoffrey E. Hill of Auburn University: “The mitonuclear compatibility species concept” (free download, reference at bottom). She also interviewed several other evolutionary biologists and ornithologists.

Hill’s idea is that speciation in birds proceeds largely through the mitochondria of one isolated population evolving divergently from the nuclear genomes of another population, so when the populations encounter each other after a long period of isolation, the mitochondrial genes of one species are mismatched with some nuclear genes from the other, and the hybrids become either sterile or inviable. That would make them different species if the hybrid problems are severe as gene flow between the populations would be very low. The strongest evidence Hill has for his hypothesis is that for the two bird “species,” the blue-winged warbler and golden-winged warbler have very low divergence in the nuclear genes (0.03% to be exact), but the mitochondria differ much more strongly—3%.  They are considered species because they have different markings and maintain their marking distinctness when they meet. 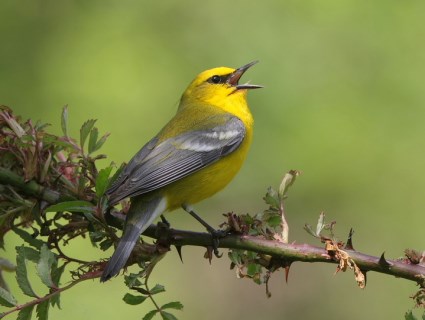 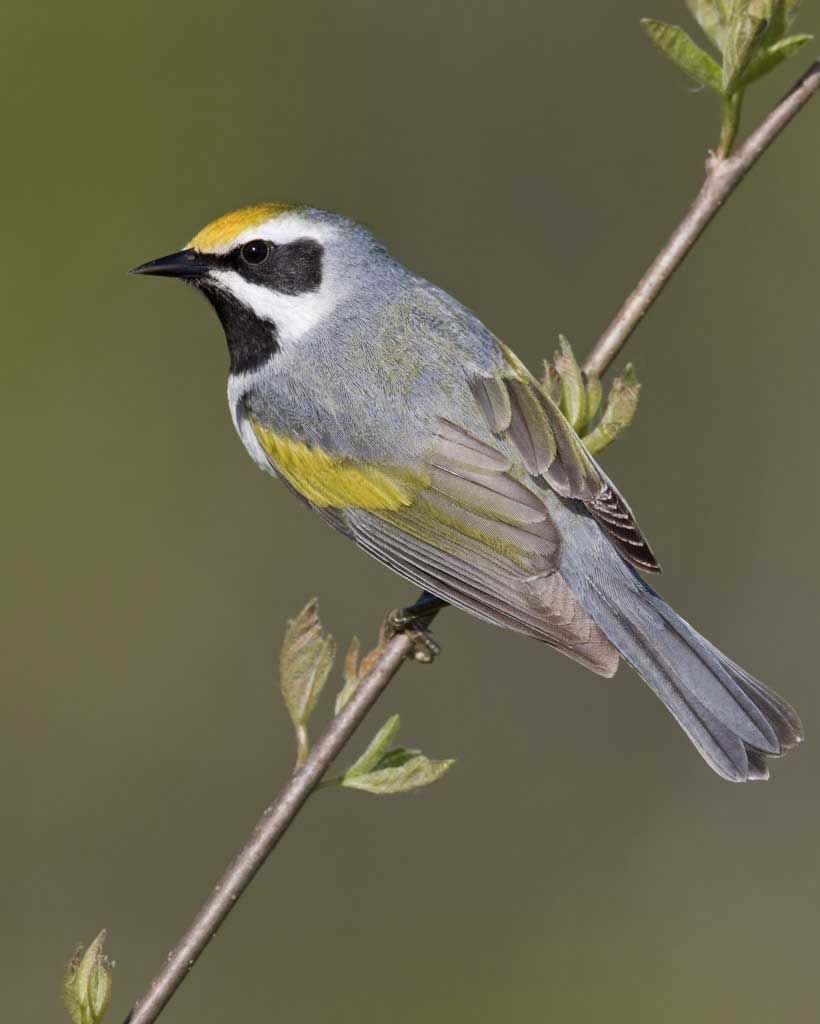 Hill’s “mitonuclear compatibility species concept” proposes that when a certain degree of genetic difference between mitochondria of different groups is seen, that is indicative of mitonuclear incompatibility, and the groups should be called different species:

As a result, once populations diverge in coadapted mitonuclear genotypes, the reduced fitness of offspring due to mitonuclear incompatibilities prohibits exchange of mt and N-mt genes and effectively isolates individuals with shared coadapted N and mt genotypes. Given these considerations, I propose that avian species can be objectively diagnosed by uniquely coadapted mt and N genotypes that are incompatible with the coadapted mt and N genotype of any other population. According to this mitonuclear compatibility species concept, mitochondrial genotype is the best current method for diagnosing species.

But he doesn’t say how much difference between mitochondrial DNA would mandate a diagnosis that two populations are different species.

To Hill, the warbler mtDNA divergence suggested that the big divergence of mitochondria played the major role in preventing gene flow between these species. But this is problematic for several reasons.

First, for a deleterious mitochondrial mt/nuclear DNA interaction, the nuclear DNA would have to have diverged as well in some places. We know that there are six regions in these species that have marked divergence in nuclear DNA, and these include the genes for body color (there are also ecological differences). But why couldn’t the speciation of these groups have involved sexual selection, so that they’ve diverged in both male color and female preference, rather than hybrid inviability due to mt/nuclear DNA divergence?

Or maybe ecological differentiation plays a role. One problem with Hill’s theory, pointed out by evolutionists Darren Irwin and Brian Sidlauskas in the Monitor piece, is that it assumes that nuclear/mtDNA incompatibility is the cause of speciation, when it could (if it even exists; see below) might have followed speciation that had already occurred through sexual selection or other processes.

But if that’s the case, why are the mitochondria so diverged compared to the nuclear DNA? I have my own theory on that, which I imparted to Ms. Botkin-Kowacki, but which she didn’t mention in her piece. In birds, females are the heterogametic sex (the sex with unlike sex chromosomes), having ZW females and ZZ males. This is the reverse of the situation in mammals and insects, in which males are heterogametic, with XX chromosomes in females and XY chromosomes in males (Lepidoptera are like birds in this respect.)

We also know, in a phenomenon called “Haldane’s Rule” (after biologist J.B.S. Haldane), that in hybrids between species and populations, if only one of the two sexes is sterile or inviable, it is almost invariably the heterogametic sex. So in species hybrids in birds and butterflies, the females are often sterile or inviable, while in mammals and insects it’s usually the males. I spent much of my career working on this phenomenon, and my work and that of others have suggested some explanations, which I won’t go into here.

If Haldane’s rule applies in these warblers, then the female hybrids could be more sterile or inviable than males. Since females but not males pass on mitochondrial DNA, this would—because female hybrids couldn’t mate with males of either parental species—prevent the mitochondrial DNA from moving between the two species. This wouldn’t apply to nuclear DNA, which could move between species when male hybrids mated with either parental species. But those male hybrids wouldn’t pass on their mitochondrial DNA, which is transmitted only by the female parent. This phenomenon alone would account for the disparity in mitochondrial versus nuclear DNA divergence, without having to invoke any bad interactions between mitochondrial and nuclear genes. It’s simply a phenomenon of genetics–if part of the DNA can’t move between species, then that part will diverge faster. And that would knock down Hill’s strongest evidence. (His evidence for his theory isn’t very strong anyway, though we have seen the phenomenon in some copepods).

There are other problems with Hill’s theory:

As I told Ms. Botkin-Kowacki, I thought Hill’s theory was somewhat interesting, but was surprised that she was writing an article on it since it wasn’t that earth-shaking. She replied that the idea of “species” is always being revised, and now there was yet another species concept.  I then told her why I thought the BSC was the most useful one in understanding the “species problem” that intrigued evolutionary biologists during the Modern Synthesis, and my explanation is below:

Jerry Coyne, a biologist at the University of Chicago and co-author of the book “Speciation,” agrees that Hill’s hypothesis could only be one aspect of what is going on as part of the classic biological species concept. “He hasn’t established that this is a better criterion for a species concept than the one that is traditionally used,” Dr. Coyne says in a phone interview with the Monitor. “It always comes down to reproductive isolation.”

“If you ask why nature is lumpy,” he says referring to the groupings that scientists call species, “you can hardly arrive at any other conclusion other than that the things that would make these lumps a continuum instead of a lumpiness are reproductive barriers.”

I don’t think there’s one species concept that covers both asexual and sexual groups (you can’t have reproductive isolation in a group that doesn’t reproduce!), but that the BSC has proven the most useful one in understanding nature’s discontinuity. I also told her that every paper of which I’m aware that discusses the process of speciation uses the BSC, so biologists implicitly realize that reproductive isolation is crucial in maintaining the distinct groups in nature we call species.

45 thoughts on “Defining species: a new but problematic species concept”