Reader Peter called my attention to  two nice pieces on Real Clear Science and Infografic that evaluate popular-science reporting sites for both accessibility and quality.  Each outlet is scored on two axes: quality on the X-axis (evidence-based versus ideologically driven, i.e., is the reporting trustworthy?) and whether or not the content is sufficiently compelling and avoids sensationalism (Y axis). Nature and Science are, of course, scientific journals aimed at a professional audience, but their “popular” summaries are often comprehensible to laypeople; and these two get the highest ratings. I agree, though there is one writer in particular whose pieces are at best mixed (I won’t name the person.) 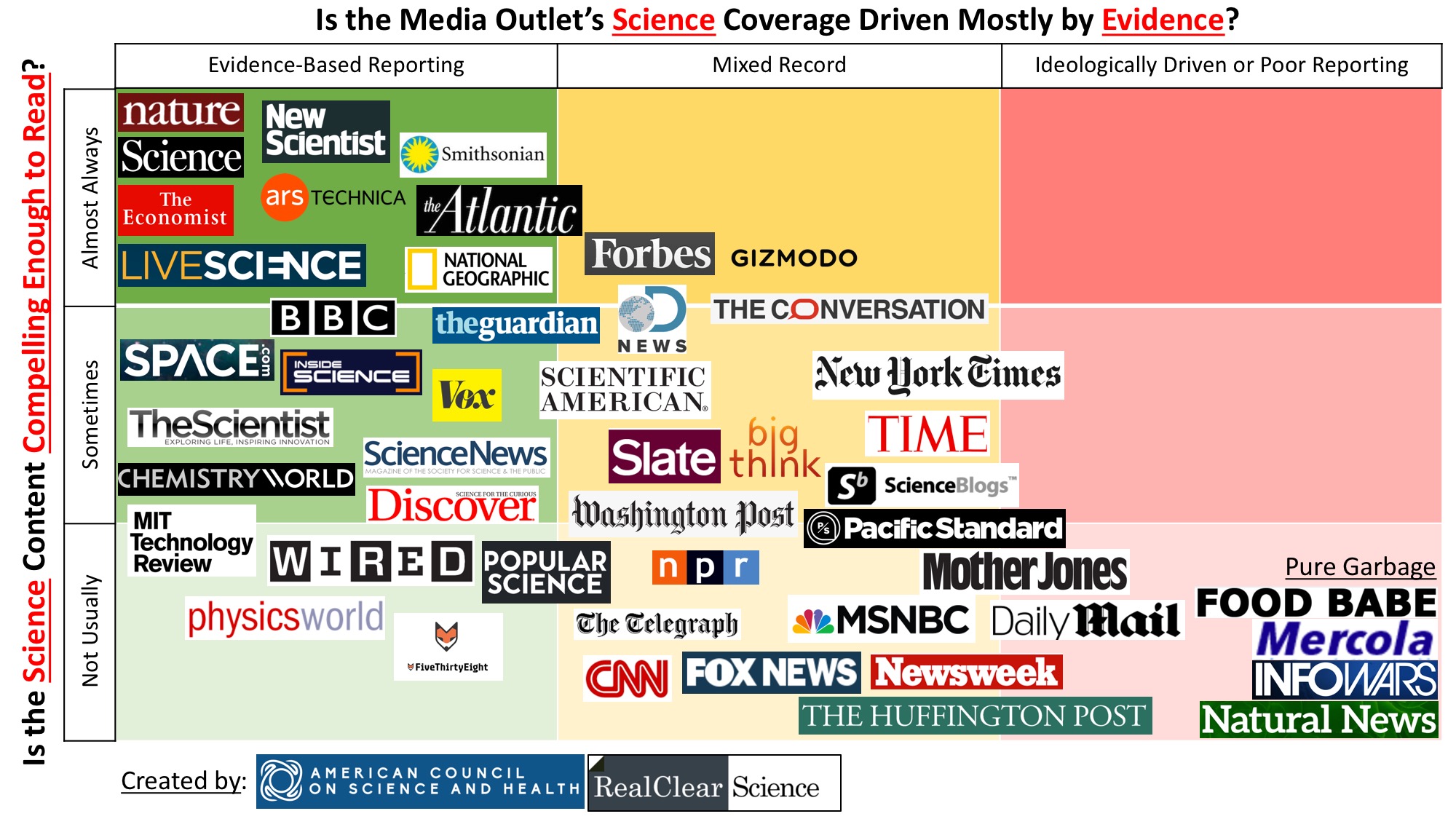 The best explanation of the rankings is at Infographic, written by Alex Berezow, a science writer and Senior Fellow of Biomedical Scienc at the American Council on Science and Health. His notes are indented, and I’ll make a few comments of my own (flush left)

Why Is THAT Source Listed There?

Some of our rankings may surprise you. Here are more detailed explanations for a few specific choices:

The best of the best. By far, the two best sources of science news (besides ACSH and RealClearScience, of course!) are Nature and Science, both of which have news sections aimed at the general public. The Economist is excellent for people who are mostly interested in global news and politics but have a curiosity for science. NewScientist and Live Science are perfect for true science geeks.

I don’t read The Economist, though I’ve written for them (contributions are anonymous). I highly recommend Nature and Science, whose overviews (not the articles themselves) are sufficiently non-technical to be appreciated by many readers here. They are scrupulously accurate, with that one exception I mention above. I think you can subscribe to the week’s content for free, and I believe many of the “popular” pieces are free as well.

No love for Popular Science and Wired? They’re okay. While some of their content is good, our biggest problem with them is that they are prone to wide-eyed speculation and clickbait rather than serious science news analysis. Physics World has the opposite problem. It is very serious and well reported, but the topic selection is esoteric and of interest to few people.

What’s wrong with Scientific American? For a long while, Scientific American became the headquarters for left-wing social justice warriors and others who felt bashing conservatives was more important than reporting good science. (Previously, that dubious distinction went to ScienceBlogs, but nobody reads that anymore.) SciAm’s best content is generally stuff they reprint from other outlets.

Agreed. I haven’t looked at Scientific American for years, and their blogs are often SJW in tone, biased, or overblown. I’ve rarely discussed any of them on this site. One welcome exception is the excellent site Tetrapod Zoology by Darren Naish. As for ScienceBlogs, I do read one good site, Respectful Insolence, featuring the anti-pseeudoscience posts of surgeon Orac.

The New York Times is a joke. The NYT — America’s alleged newspaper of record — has itself quite a record of unscientific transgressions. The paper promotes dubious fad diets, cited the quack Joe Mercola on a story about the safety of wearable electronics, and gives voice to organic foodies. It also published a story on a fake disease called post-treatment Lyme disease syndrome. The NYT regularly reports false information on GMOs and agriculture, perhaps none so egregious as this utterly abominable article by Danny Hakim that compared pesticides to Nazi-made sarin gas. If it wasn’t for the fact that some respectable writers like John Tierney and Carl Zimmer also publish there, the NYT’s science coverage would be comparable to that of the Huffington Post.

I think Berezow is a bit hard on the Times, but he’s right about Carl Zimmer and John Tierney, and I would add to that pair Natalie Angier, who publishes pieces that are not only accurate and compelling, but amusingly written. The rest of the science writers, especially those old dudes who write about physics and biology, I can leave or take. It would be nice the paper would include a regular column by a scientist (Olivia Judson did a good job in that role before she left), and I really mourn the increasing percentage of news in the “Science” section that is about human-related issues. Yes, there’s a human health part of the science section, but too often human stuff slops over into the “pure science” section. We’re only one of about 50 million species!

I should also recommend Ed Yong’s columns at The Atlantic, which are often very good. Have a look at the link to Berzow’s “record of  unscientific transgressions” at the New York Times, which surprised me, especially what it says about writer Michael Pollan’s distortions.

It really is time for the New York Times to clean house. They should hire Carl Zimmer as a regular staff member instead of a stringer, fire the superannuated writers who don’t do a good job on physics or biology, hire some good young talent (though that is rare these days), get a scientist to write a column, and cut down the human-related stuff in the “pure science” section.

Beware British tabloids. News sources like the Daily Mail and The Telegraph serve up a disproportionate amount of sensationalist garbage. Avoid.

Not a single cable news source is worth your time. While CNN, Fox News, and MSNBC might be useful for other things, they are mostly awful sources of science news. Any science news reported here should be verified for accuracy.

I’ll add that NPR doesn’t do a great job with science either, though I much like Science Friday.

Pure garbage. The biggest purveyors of fake science news are Natural News, Mercola, The Food Babe, and InfoWars. If they ever report something truthful, it is almost certainly by accident. Even a broken clock is correct twice per day.

I’d add PuffHo there, too, but I’m biased, as that place is my bête noire.  Here are today’s “top science stories” from that place:

Finally, read Berzow’s other piece, “How to spot a fake science news story.”

I welcome readers to chime in here, or add sources not listed.

51 thoughts on “Where do you find the best science reporting?”