You’d think the state of Arkansas would have learned its lesson in the case of McLean v. Arkansas Board of Education, a case decided in 1982 by the late U.S. District Court Judge William Overton. Ruling on Arkansas Act 590, the “Balanced Treatment for Creation-Science and Evolution-Science Act”, which actually required the teaching of so-called creation science in the state’s public schools, Overton struck the law down firmly, asserting that it violated the Establishment Clause of the First Amendment to the U.S. Constitution (“Congress shall make no law respecting an establishment of religion, or prohibiting the free exercise thereof”). In other words, Overton considered “scientific creationism” as simply a form of Christian doctrine, which it certainly was. The eloquent final section of Overton’s decision still lodges in my mind, and stands as the definitive reason why creationism doesn’t belong in public schools:

But. . . the Arkansas creationists are back again! As the National Center for Science Education (NCSE) reports, on Monday, State Representative Mary Bentley (a Republican, of course) filed a “shell bill” on the last possible day for introducing bills to be considered this year by the state legislature. This was an attempt to sneak creationism in under the radar by putting in a one-paragraph bill. But people noticed. One group was the NCSE, which said this:

HB 2050 is the only antievolution bill to be filed in Arkansas since 2005’s House Bill 2607, similarly filed as a shell bill and subsequently amended. If enacted, the bill would have required the state Department of Education to include “intelligent design” in its educational frameworks and also encouraged teachers in the state to include it in their lesson plans. HB 2607 died in committee. 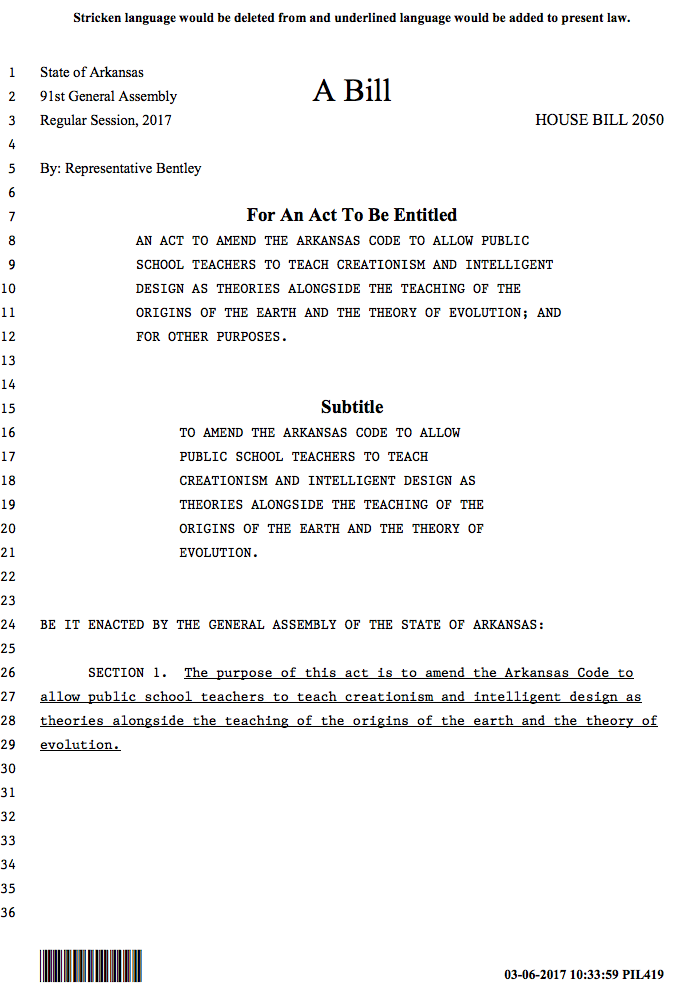 This will fail, as have other bills, because it falls under the Overton decision: it allows the teaching of religiously based pseudoscience in the public schools.