As a secular Jew (yes, Dave Silverman, we exist), I have the right to utter a loud OY!

Donald Trump is now trumpeting loudly—on Twitter, of course—that his campaign phone lines were tapped by Obama. Here are four tweets in reverse order, and OY, are they strong! McCarthyism! Obama is a “Bad (or sick) guy!” And of course there’s the misspelled “tapp”. 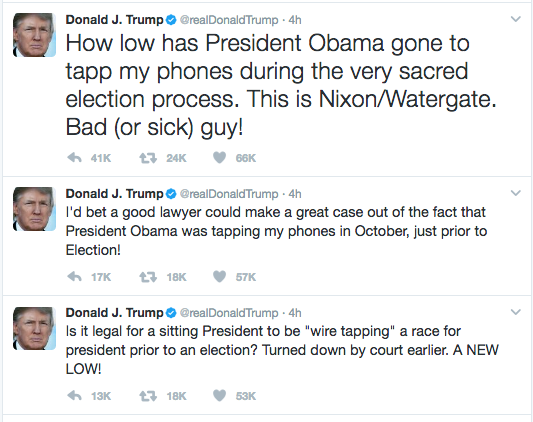 Is any of this true? It doesn’t seem so. No phones were tapped, though there was surveillance of computers. As the Washington Post and Politico report, it appears that, under Obama, the Justice Department monitored a computer server located in New York’s Trump Tower to see if there were surreptitious links to Russian banks. As for the legality of monitoring computers, Trump should be asking his Attorney General, Jeff Sessions. As Politico reported:

A New York Times article published on Jan. 19 – just one day before Trump’s inauguration – reported that U.S. law enforcement and intelligence agencies had intercepted communications and financial transactions as part of a probe of links between Trump’s campaign and Russian officials.

There has been no definitive reporting, however, that any phone lines belonging to the Trump campaign were tapped.

“It’s highly unlikely there was a wiretap,” said one former senior intelligence official familiar with surveillance law who spoke candidly on the condition of anonymity. The former official continued: “It seems unthinkable. If that were the case by some chance, that means that a federal judge would have found that there was either probable cause that he had committed a crime or was an agent of a foreign power.”

A wiretap cannot be directed at a U.S. facility, the official said, without finding probable cause that the phone lines or Internet addresses were being used by agents of a foreign power — or by someone spying for or acting on behalf of a foreign government. “You can’t just go around and tap buildings,” the official said.

In my entire life I’ve never imagined that a.) we’d have a loose cannon like this in the White House, one who goes flinging unsubstantiated accusations at former Presidents, and b.) that there would be governance by pronouncements on social media like Twitter.  Imagine a President calling his predecessor a “bad (or sick) guy”, and with no evidence to back that up! Clearly, Trump is trying to divert attention from his own failing agenda, and the debacle that has been his cabinet selections, to unevidenced missteps of others.

This is the man who controls the armed forces and our nuclear weapons, and has the power to order their use. Lord knows what’s in the offing . . . .

98 thoughts on “Thanks to The Donald, the U.S. goes further down the tubes”