Historically, the northern elephant seal (Mirounga angustirostris) had rookeries only on islands, presumably to avoid terrestrial predators.  With the extirpation of all large predators, several mainland rookeries have been established since the 1960s by a rebounding population (from near extinction in the early 20th century). Dating to the early 1990s, Piedras Blancas is now the largest of all the rookeries, with a peak population approaching 10,000.

The rookery stretches four or five miles along the coast, but the densest section is arc of sandy beach roughly a half mile long, backed by dunes and low bluffs.  The first two photos look in opposite directions from near the center of that section.  You can see in the first shot part of the viewing area that has been constructed along the bluff. 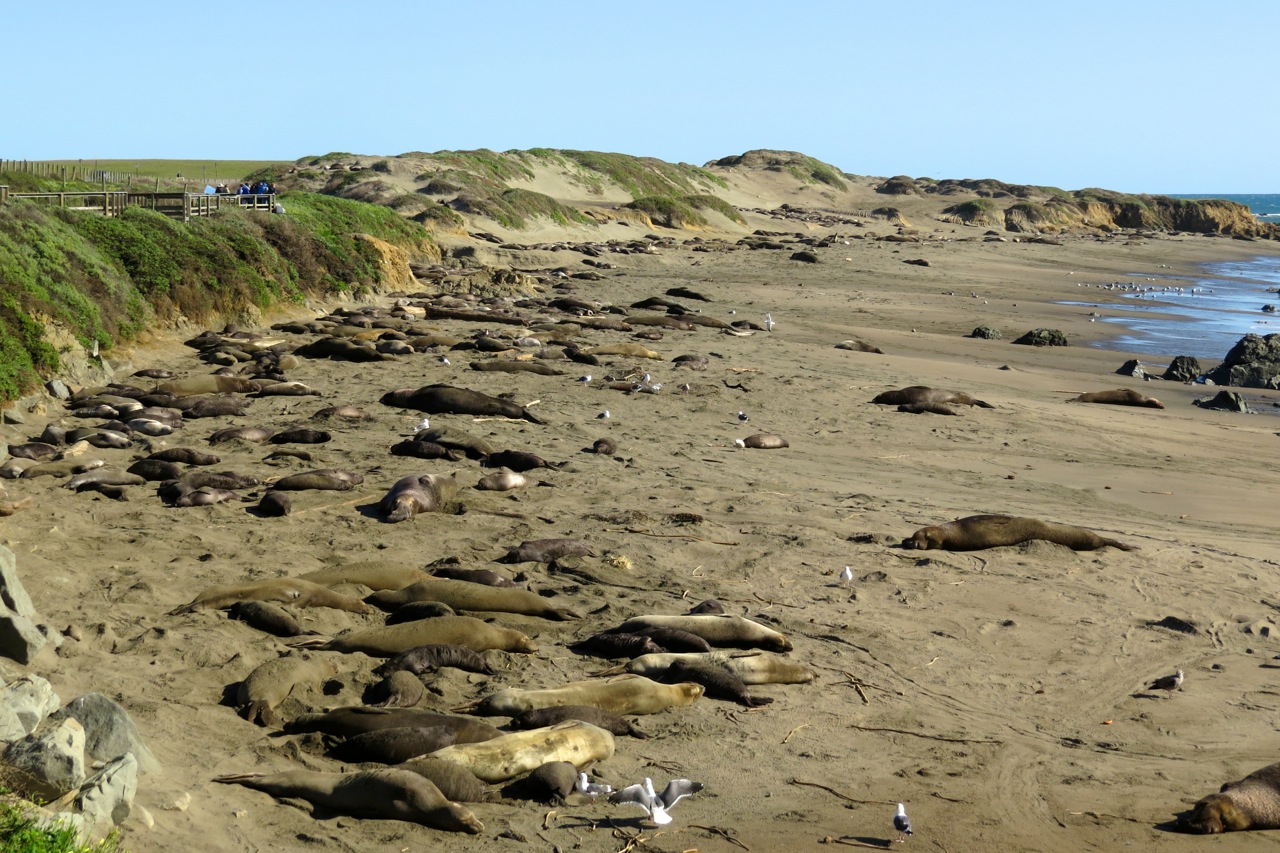 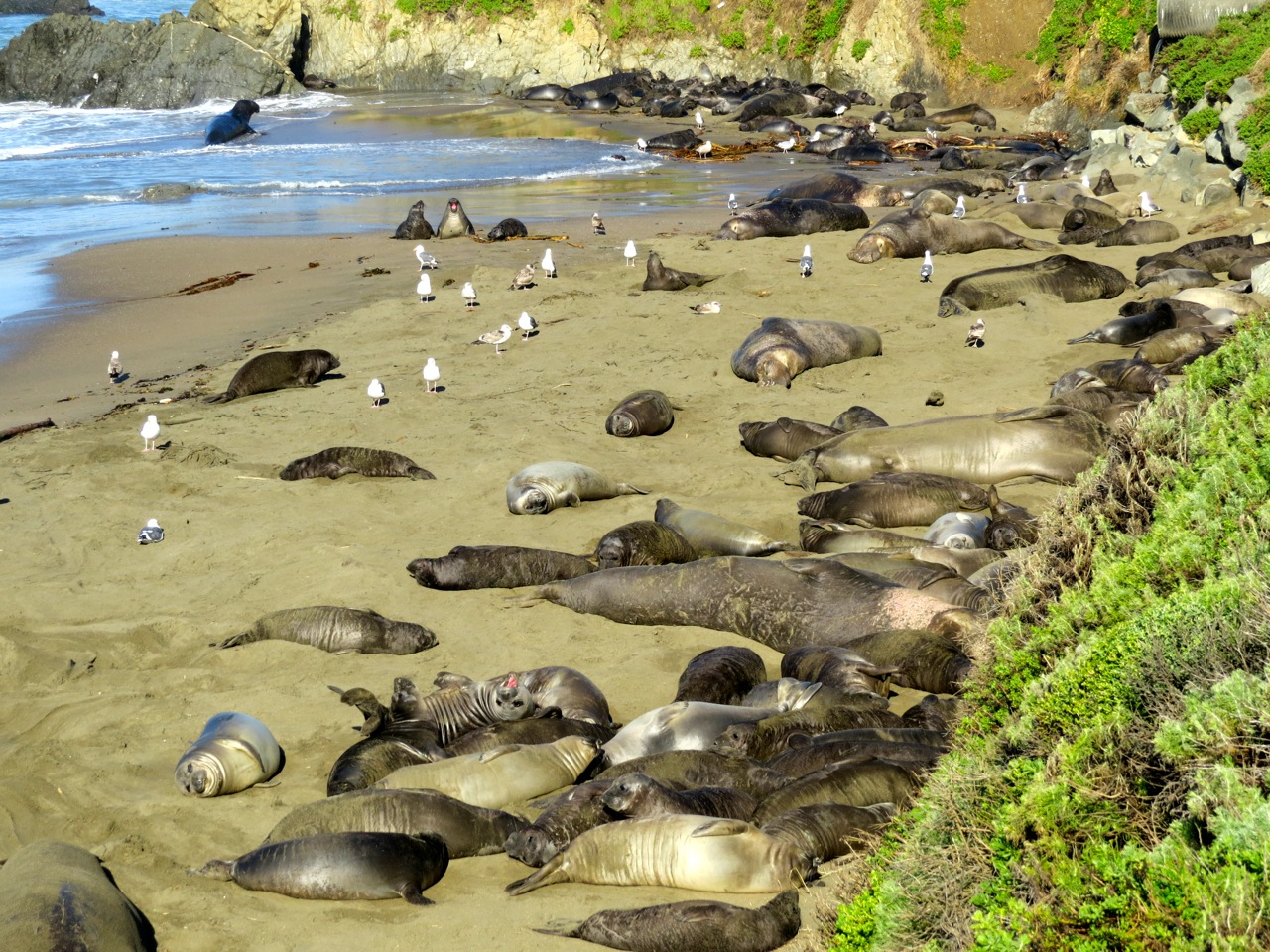 Males, females and juveniles come and go on different schedules, but all are represented from about mid-December until early March.  Here is a “family group” in which you can see the enormous sexual dimorphism.  The pup was born probably in January and is near weaning.  The female will come into estrous and mate at about that time.  Shortly thereafter, she heads back out to sea.  The male in this shot almost certainly is not the father of the pup, but likely will sire a half-sibling to be born next year. 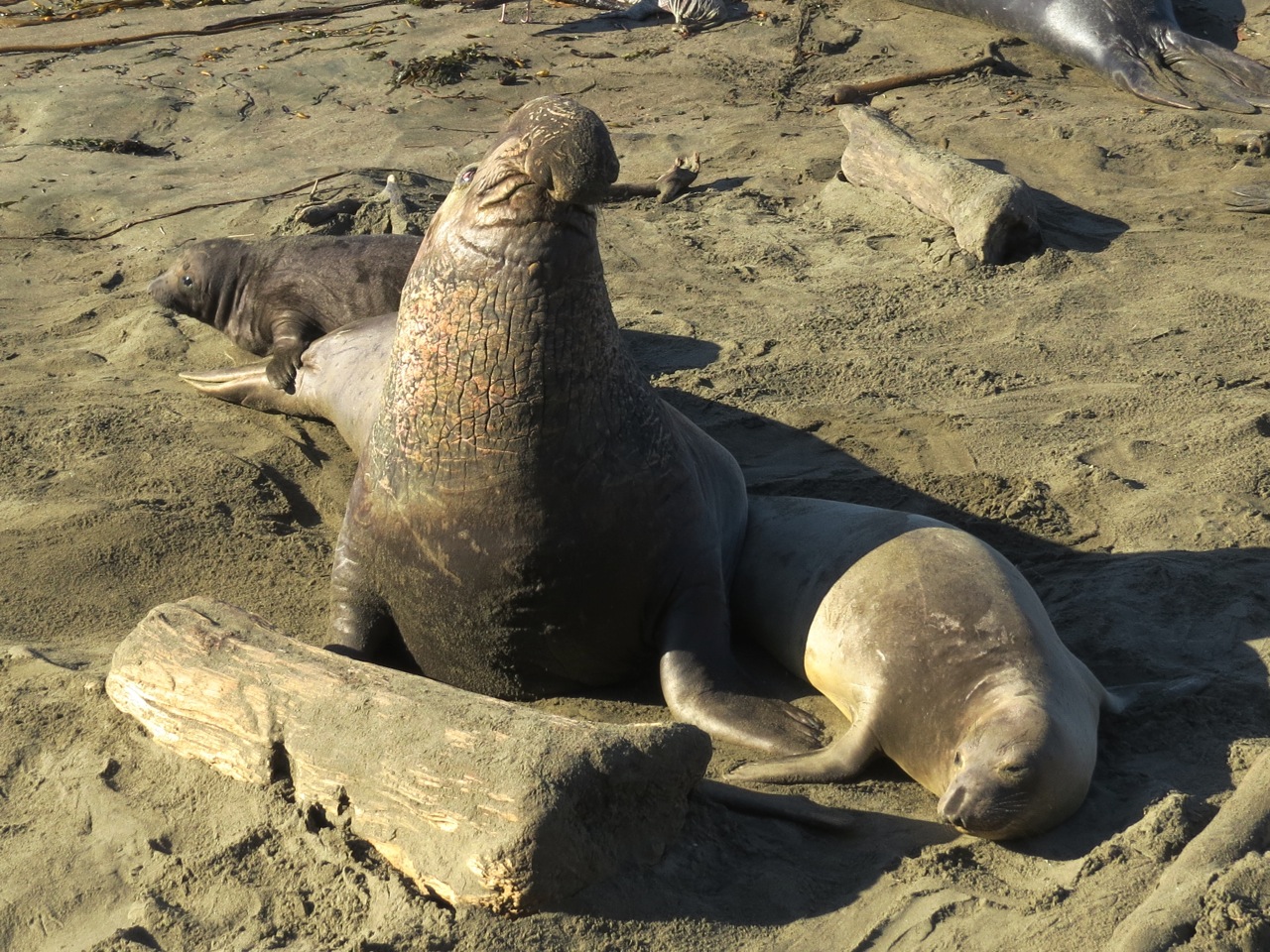 Here are closeups of male, female and pup. ( I’m also going to send a video of pups “racing” along the beach): 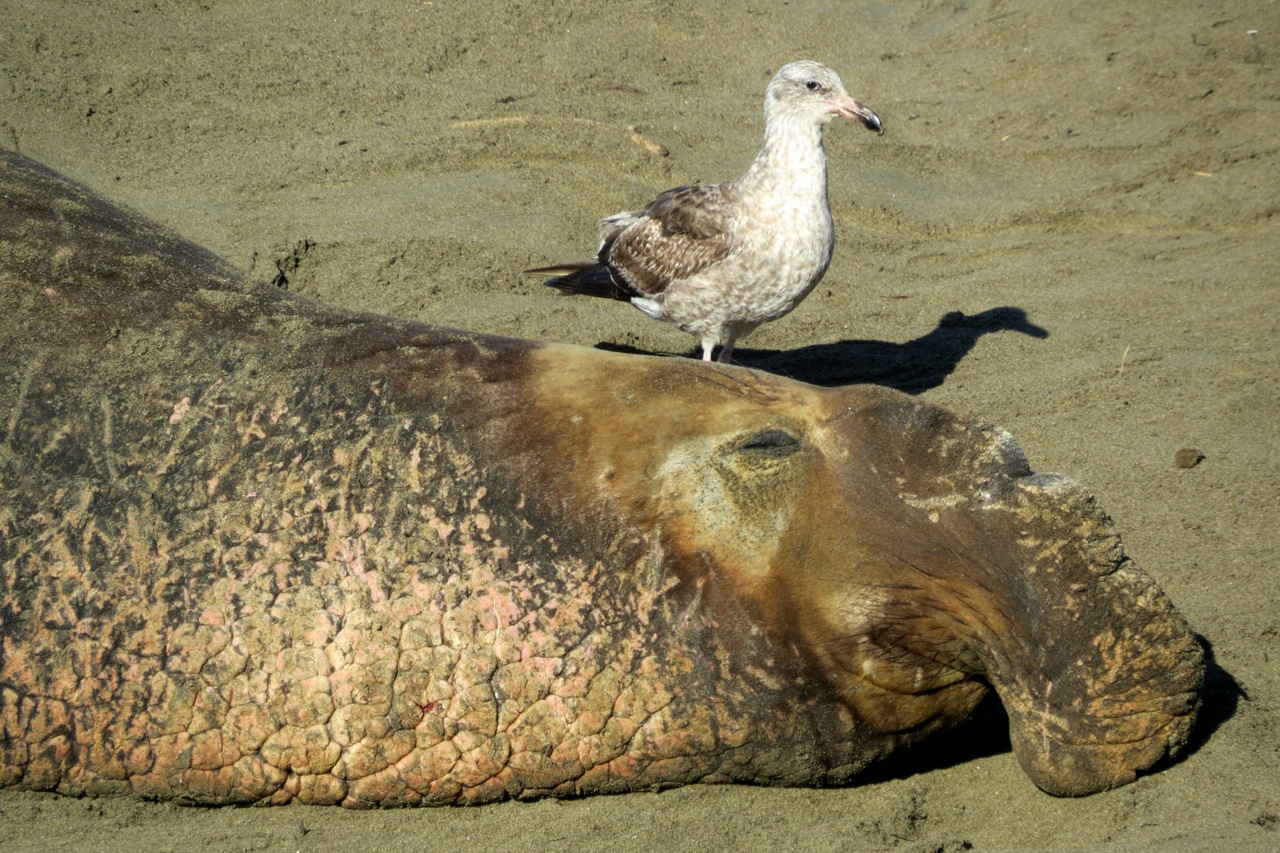 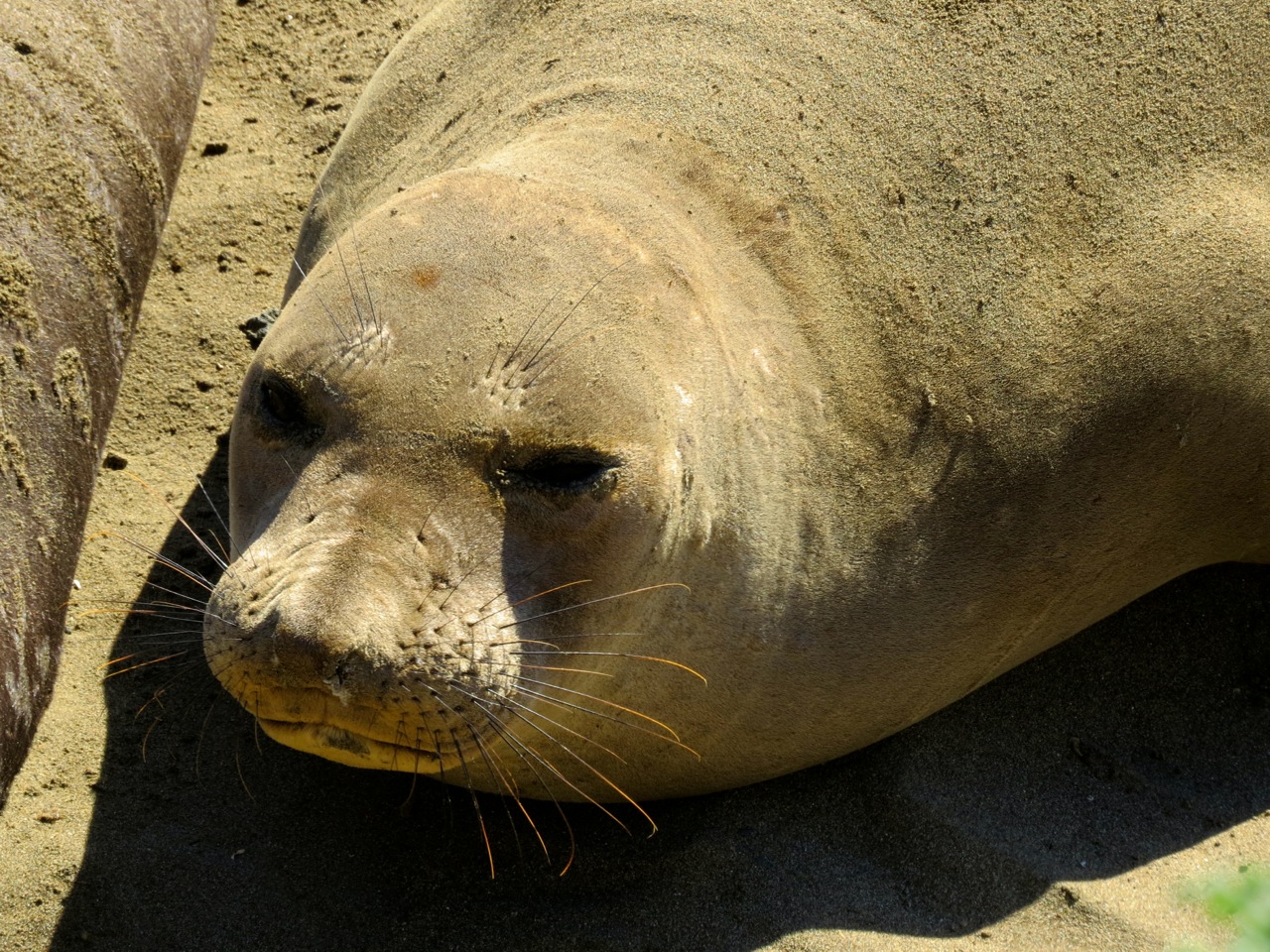 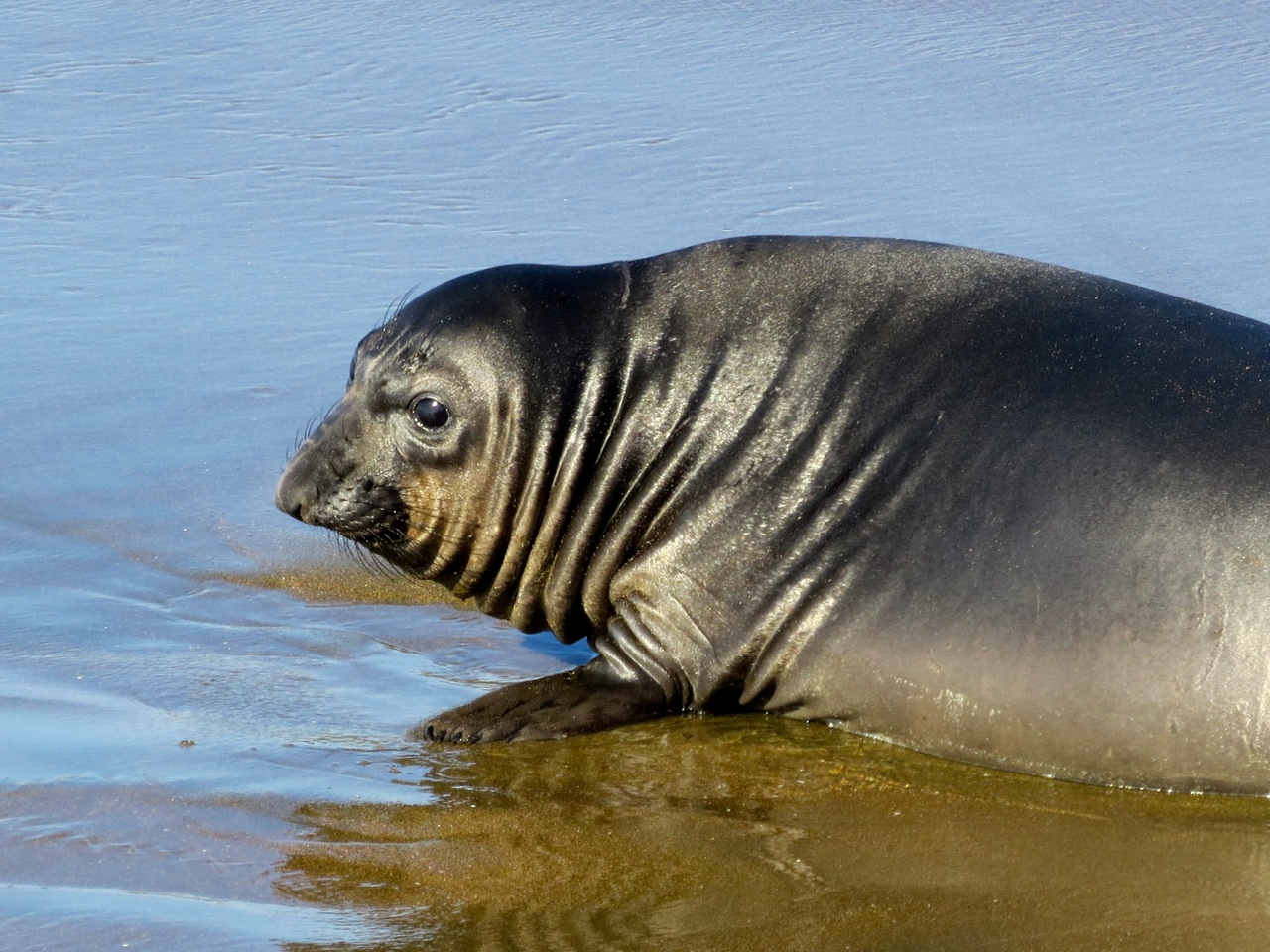 Females do not feed during the birthing and nursing season (4 – 6 weeks).  After giving birth, they basically become milk dispensers for about a month.  They lose something like 1/3 of their body weight, say from about 1800 lb down to 1200. [JAC: Males can weigh up to 4000 kg, or nearly 9,000 pounds! That is almost three times the weight of a Volkswagen Beetle.] 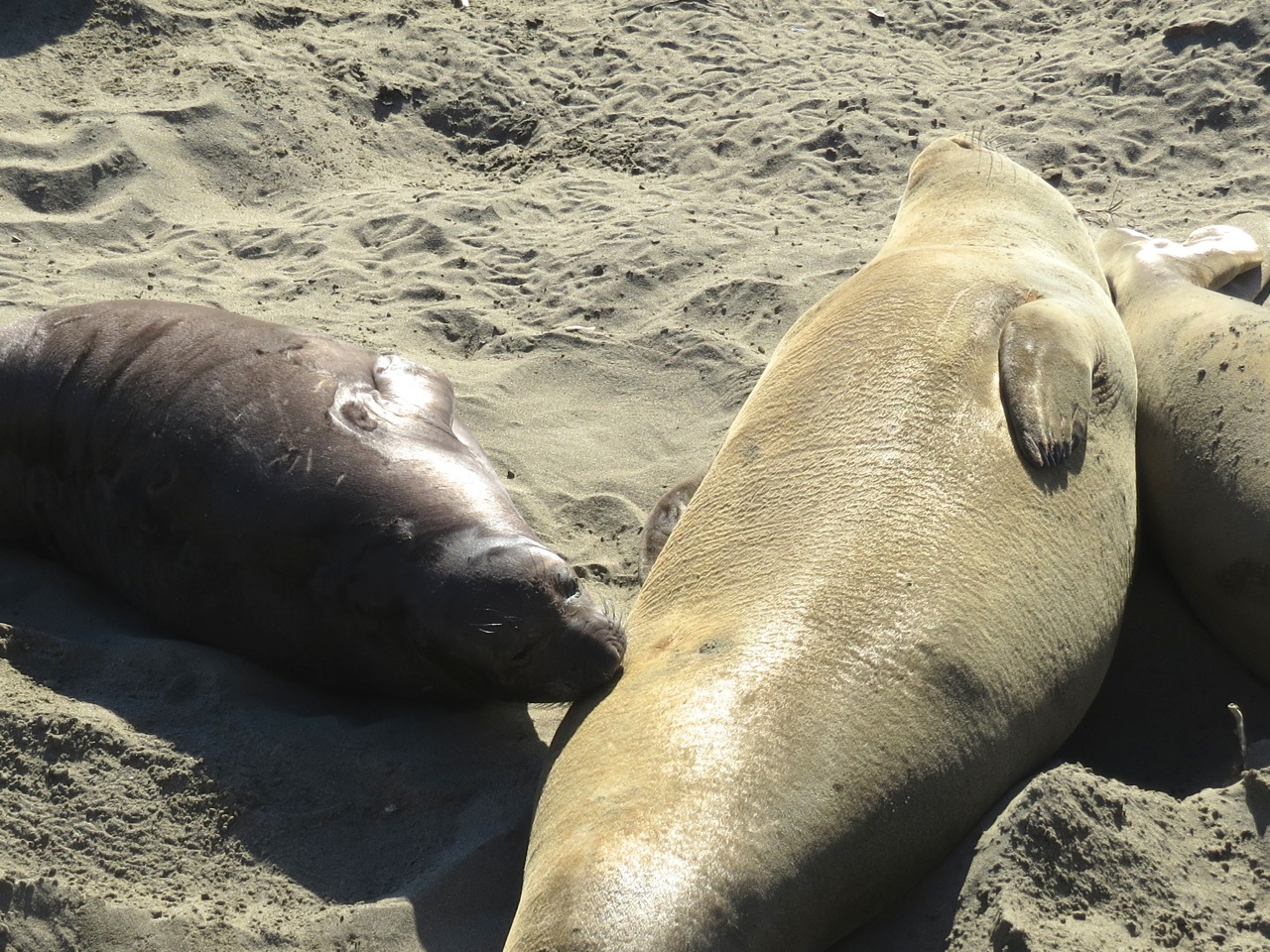 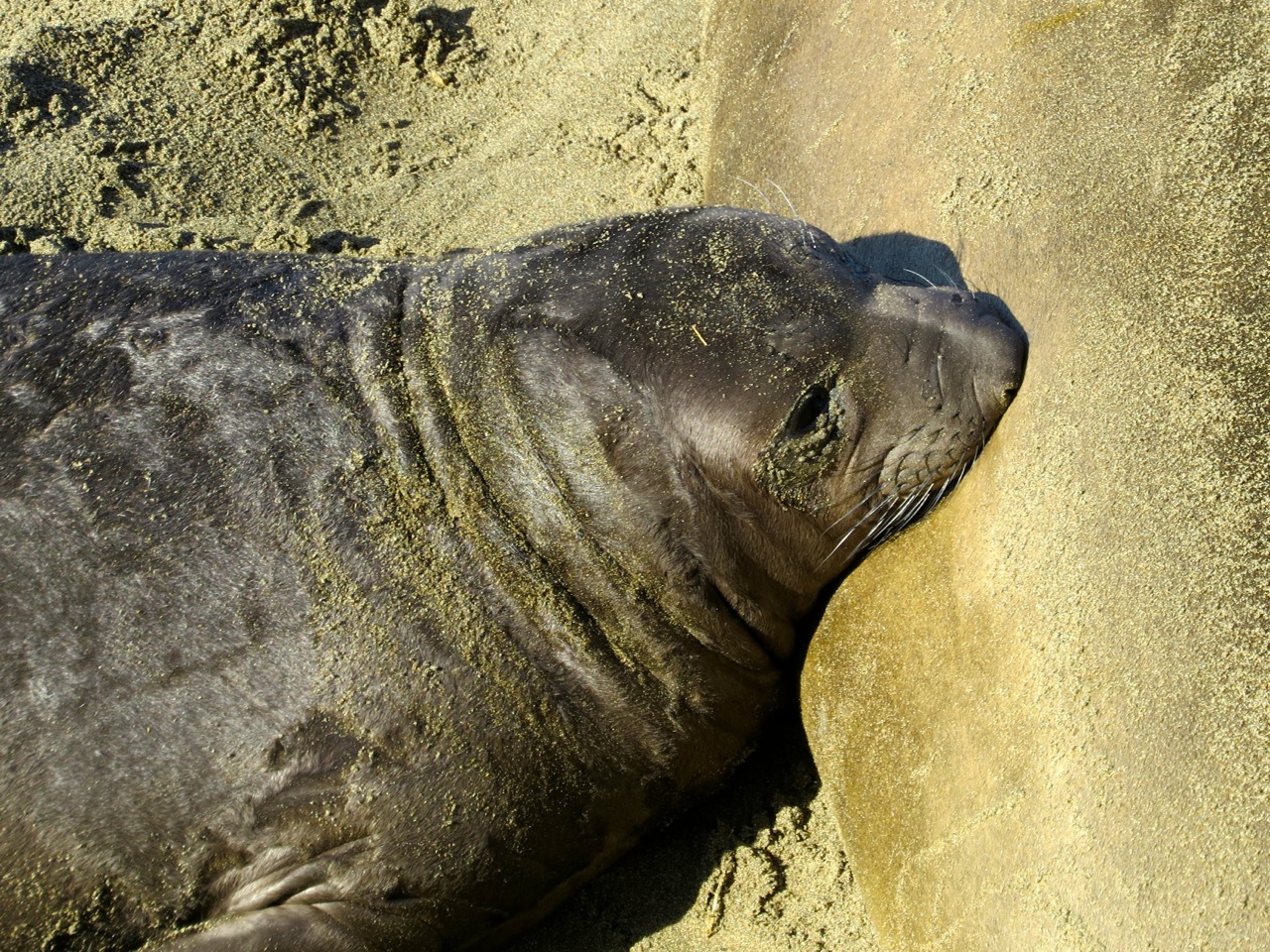 By the time of our visit, most females had departed, leaving the weaned pups behind to undertake their own migration without adult supervision a few weeks later.  Except for one male upper left, this shot shows only weaned pups (dare I say “pile-o-pups”?). 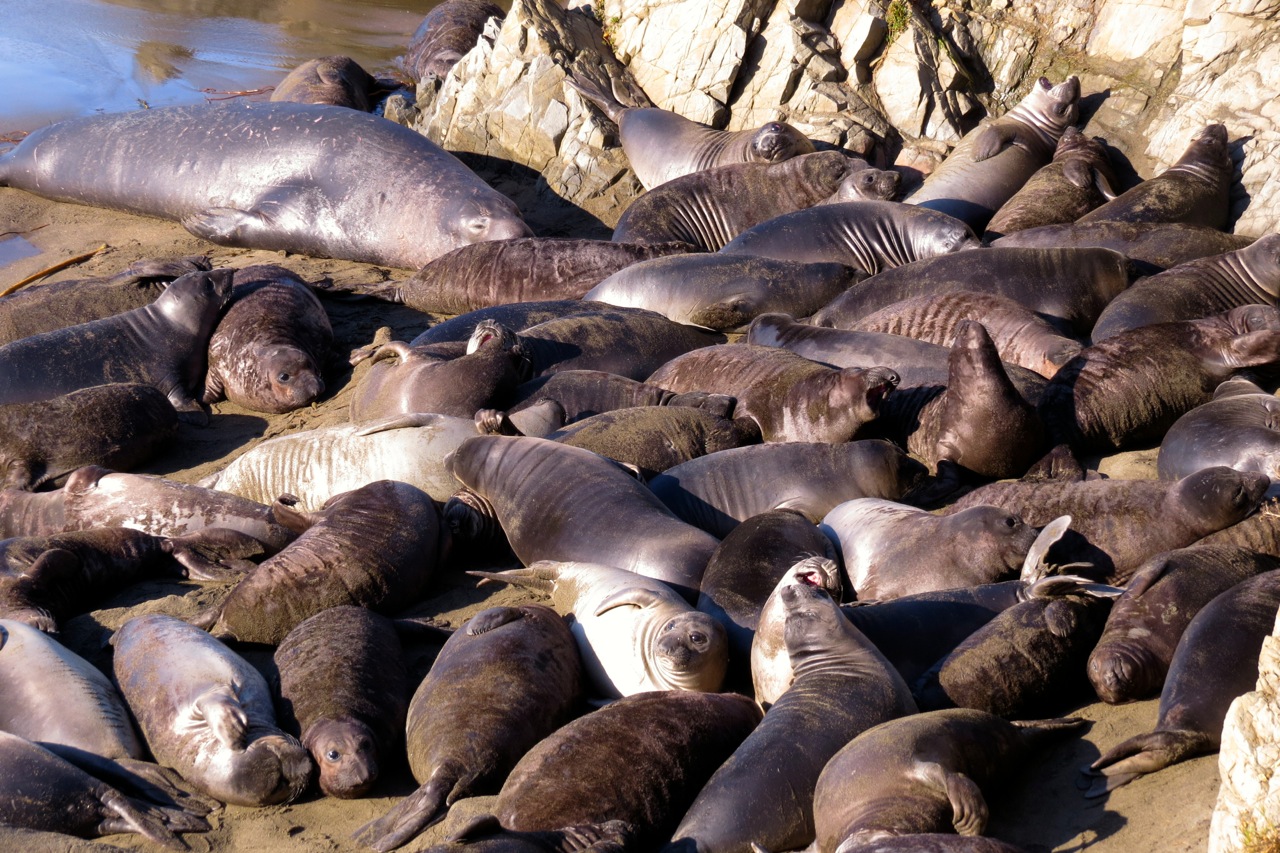 Earlier in the season, when males are vigorously contesting territories and access to females, being crushed is a significant danger for pups.  This particular encounter just evoked some rather strident squealing. 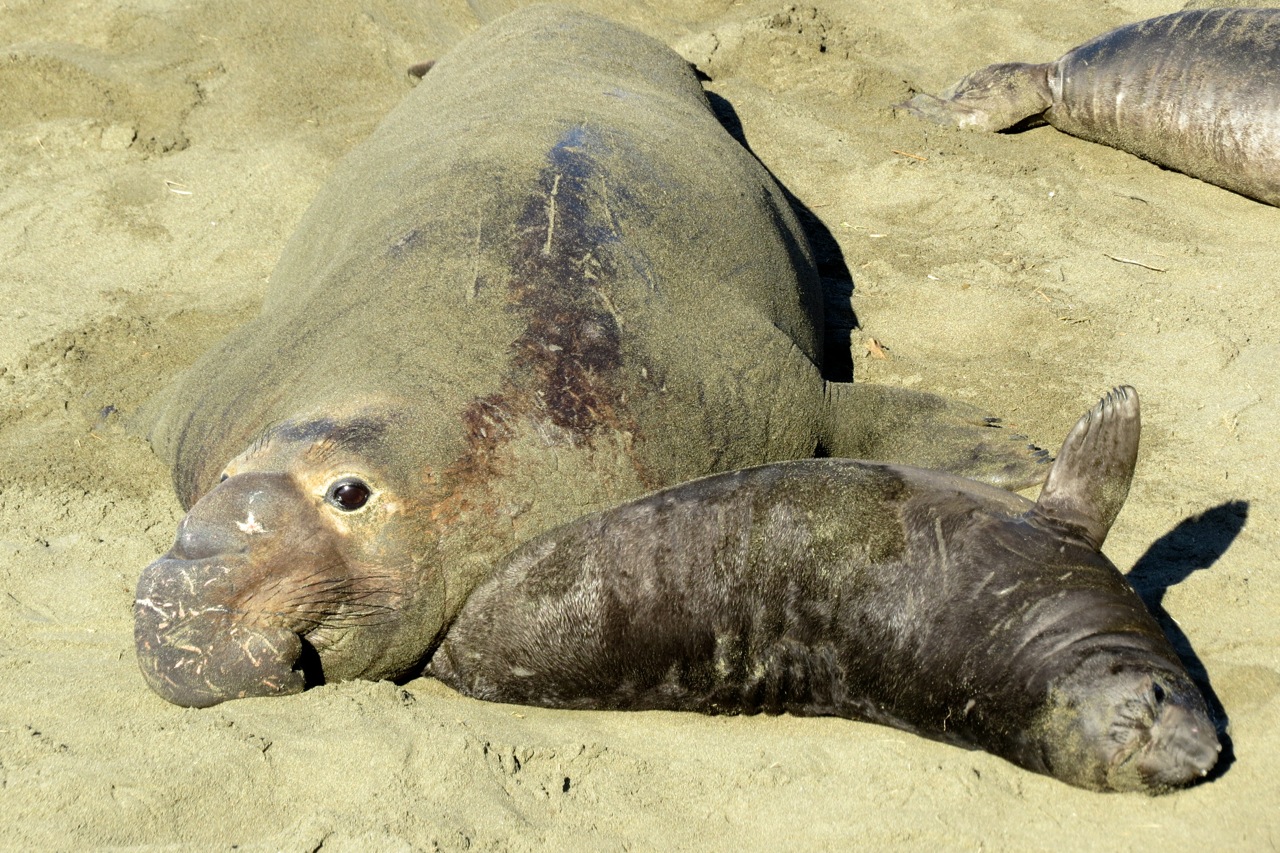 Finally, I can’t help imagining this pup thinking “Am I going to look like that when I grow up?” 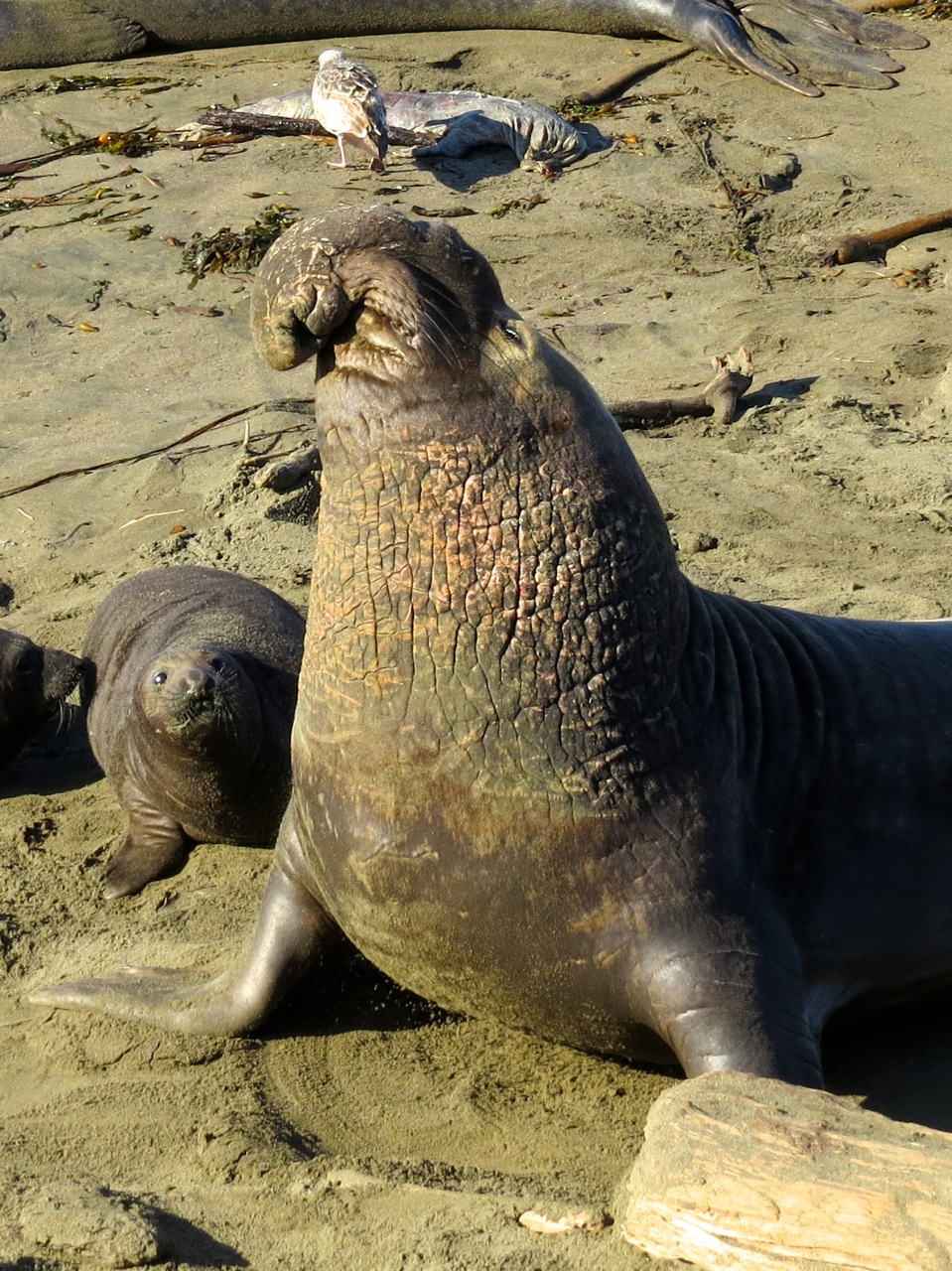 Here’s Joe’s video of pups racing to the water:

4 thoughts on “Readers’ wildlife photos (and a video)”