Admit it: you’ve wondered, because you’re interested in evolution, why giant pandas are colored that way: “parti-colored”, as they say in the trade. (Their Latin binomial, Ailuropoda melanoleuca, means “cat-foot, black and white”.)

Here’s one, in the extremely unlikely case you’ve forgotten: 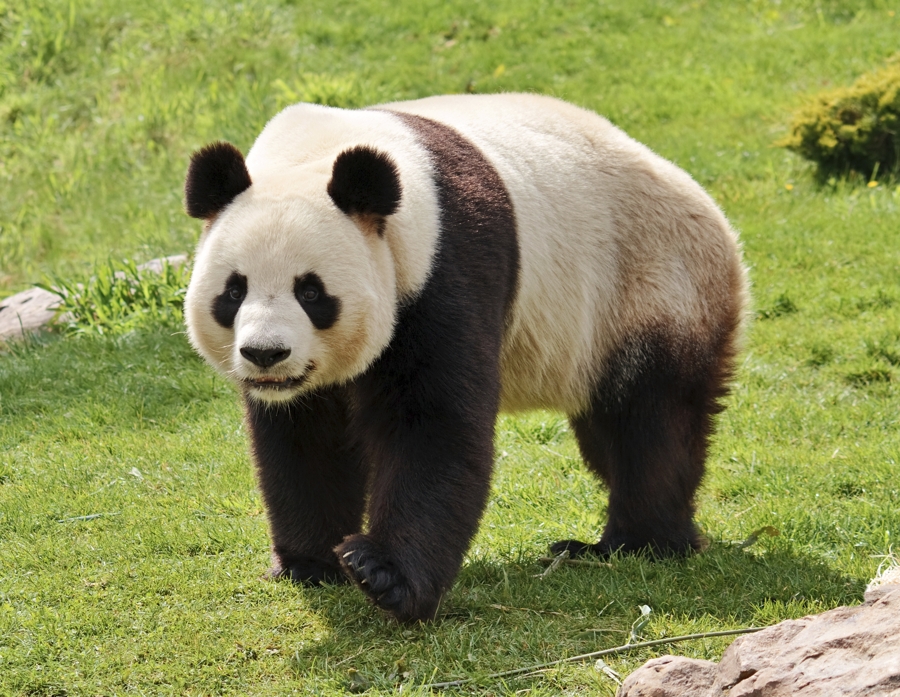 No other bear looks anything like that. A new paper in Behavioral Ecology by Tim Caro et al. attempts to explain this pattern, though access isn’t free. (The reference is at the bottom, and if you need a pdf file, judicious inquiry might yield one.)

As you may recall, Caro and his colleagues are the people who have evidence that zebra stripes evolved to ward off biting flies.

In the new paper, the authors first describe the panda’s color pattern in appealing language, and then lay out the hypotheses that have been advanced to explain that pattern. Remember that pandas are the only completely herbivorous bears, subsist on a diet of low-quality bamboo, and live (at least now) almost entirely in Szechuan Province of China, though they previously ranged more widely. They live at fairly high elevations and often encounter snow. This ecology must be taken into account when framing and testing hypotheses.

The color (all indented text comes from the paper):

. . . a small number of mammals do have sharply contrasting black-and-white pelage, the function of which is known for only a very few (Caro 2009; Caro et al. 2014). Perhaps, the most outstanding example is the coat of the giant panda (Ailuropoda melanoleuca) (e.g., Croke 2005). This strangely patterned ursid has black eye markings and black ears set on a white face. The neck and torso are white but the forelimbs, shoulders, and hindlimbs are black (Figure 1a). The species shows little sexual dichromatism. Such a pelage pattern is very rare among mammals and the adaptive functions of the giant panda’s external appearance remain mysterious, despite the species being a familiar charismatic species to people all over the world.

And the four (actually six) hypotheses (my emphasis):

Four ideas have been explicitly proposed to explain giant panda coloration: 1) the species’ pelage is aposematic and advertises pugnacity (Morris and Morris 1966), 2) the white fur of the panda is cryptic against a snowy background (Morris and Morris 1966; Lazell 1974), although its current population is found in snowy habitats for only a third to a quarter of the year, 3) the dark fur is used to retain heat in cold environments (Schaller et al. 1985), and 4) the contrasting markings on the giant panda’s face are used in intraspecific communication (Schaller et al. 1985; Schaller 1993). Additionally, without referring specifically to the species in question, it has been proposed that dark fur around the eyes reduces glare from the sun (Ficken et al. 1971). Sharply contrasting pelage might also be an example of disruptive coloration where internal edges draw the eye away from the true outline of the animal. A theme running through all these suggestions, except the last, is that different regions of the body may have coloration that serves different functions.

I’ll try to be brief in how the authors tested these hypotheses and what they found. They divided up the panda into 7 sections of coloration as in the figure below (it looks like a butcher’s diagram of “panda cuts”!). They used another method as well based on the pelage of other carnivores (“b” in the figure below), and divided the face and head into 12 areas (“c” in the figure below).

They then assessed the coloration of 195 terrestrial carnivore species in each area, getting a “color map” of each species. (Remember, pandas are in the order Carnivora though they eat only bamboo.)

Which hypotheses stood up? Well, none of them explained everything, and most of them were supported only weakly with the data.

Temperature and shade:  There were significant associations between low temperature and white winter coloration, as well as snow and some areas of white coloration (these variables are cross-correlated, of course), so the authors conclude tentatively that the white areas of the panda camouflage them in the snow against predators (they are eaten by dholes [canids], leopards, wolves, and Asiatic black and brown bears). Animals inhabiting shady areas, like pandas, tended to be more darkly marked on the back and legs, though not the head. From this the authors suggest that the black and white body coloration is cryptic in general, hiding pandas in both shade and snow. They don’t address whether the contrast in color might make them, overall, more conspicuous, but I assume they know what they’re talking about.

Sociality and intraspecific communication: The authors suggest that the black patches on the eyes and ears, but no other aspect of coloration, are there for social communication among individuals. They have no direct evidence for this, but use anecdotal observations to support the idea:

Schaller (1993) noted that a stare represents a threat in giant pandas, and the patches enlarge the giant panda’s eye 10-fold making the stare more potent. To show lack of aggressive intent, a giant panda averts its head, covers the eye patches with its paws, or hides it face. At present, we cannot separate whether giant pandas have exaggerated eye marks to signal aggressive intent to other giant pandas, and possibly predators, or whether they are involved in intraspecific recognition, or both. But we do know that intraspecific signaling is important in this species (Nie et al. 2012; Owen et al. 2016).

As dark ear markings are closely associated with dark eye markings across carnivores, the possibility that dark ears are a form of eye automimicry cannot be discounted. Schaller (1993, p.97) reports “a staring panda often holds its neck low, a position that not only presents the eye patches to an opponent but also outlines the black ears against the white neck, in effect presenting 2 pairs of threatening eyes.”

In the end, as shown in the diagram below, the authors propose a multi-part explanation of the parti-colored pattern. Black and white on the main body are there for camouflage to hide the bears from predators, while black eyes and ears are for communication with other pandas. The authors offer the proper caveats, including that these correlations are based on human vision rather than animal vision, and that correlational analysis in other carnivores may not explain the peculiar situation in pandas.

So here’s the best explanation we have yet, but, due to our inability to go into the wild, dye the fur of pandas, and then see what happens to them, this may be the best we can do:

Finally, Caro et al. note that all of this might ultimately come from the panda’s low-quality diet, which prevents it from either hibernating or molting, leaving it stuck with a coat that’s on display year round and can’t be shed:

Ultimately, we suggest that the giant panda’s dual coloration stems from its poor nutritional diet of bamboo and inability to digest plant material efficiently (Schaller et al. 1989; Xue et al. 2015), forcing it to be active throughout the year as it cannot lay down sufficient fat reserves to hibernate. Thus, it encounters several backgrounds and lighting conditions during the course of a year, extremities of which are an alpine snowy habitat and dark tropical forest. We propose that as the giant panda is unable to molt sufficiently rapidly to match each background (although anecdotes of individual black bears changing color between molts have been documented [Rogers 1980]), it has evolved a compromise white and black pelage. This is an alternative evolutionary strategy to smaller carnivores like the ermine and arctic fox that have winter and summer coats.

So, my friends, we’ve reached the end of this post. Panda coloration isn’t nearly as well understood as is the striping of zebras (also black and white), but the authors gave it a game try, and they may well be right! And since you’ve read this far, here’s your reward: a video of baby pandas, perhaps the world’s cutest animal.

34 thoughts on “Why are giant pandas colored that way? Answer: It’s complicated”