Well, we’ve reached Friday again: February 24, 2017—the 55th day of the year—and another day closer to both the weekend and the grave. It’s also National Tortilla Chip Day, and in Iran it’s Sepandārmazgān, or Woman’s Day, characterized by Wikipedia as “a celebration day of love towards mothers and wives.” Would it be too much for the government to allow women to dress as that want today—and maybe take off the headscarf?

On this day in 1582, Pope Gregory XIII announced the advent of the Gregorian calendar with a Papal Bull. The Papal Cow was nowhere to be seen. In 1854, a new version of the Penny Red postage stamp made its appearance in Britain: the first stamp ever having perforations. Its predecessors, the Penny Black and the unperforated Penny Red, had to be cut from a sheet with scissors. The UK apparently remains the only country in the world not bearing its name on its postage stamps, deeming a Royal profile sufficient.

On February 24, 1868, Andrew Johnson was the first U.S. President to be impeached (which means to be brought to trial in the Senate, not to be convicted). He was acquitted of “high crimes and misdemeanors”. On this day in 1920, the Nazi Party was founded; note that it was only 16 months after the end of World War I. Exactly 60 years later, the US hockey team completed its “miracle on ice”: after an unexpected win over the Soviet Union, it beat Finland 4-2 to nab the gold medal. It was on this day in 1989 that Ayatollah Ruhollah Khomeini issued a fatwa against Salman Rushdie, also offering a $3 million (US) bounty for the author’s death. And it was on February 24, 2008, that Fidel Castro resigned as President of Cuba.

Notables born on this day include botanist Joseph Banks (1743), Winslow Homer (1836), Steve Jobs (1955), and Judith Butler and Eddie Murray (both 1956). Those who died on this day include Malcolm Forbes (1990), Dinah Shore (1994), Don Knotts (2006), and Harold Ramis (2014). Meanwhile in Dobrzyn, Hili got wormed, and Sarah photographed the process, which involved rubbing goo onto the cat that she licks off. It went pretty well this time:

A: We have to de-worm you.
Hili: And have you tried out this treatment on yourselves?
(Photo: Sarah Lawson) 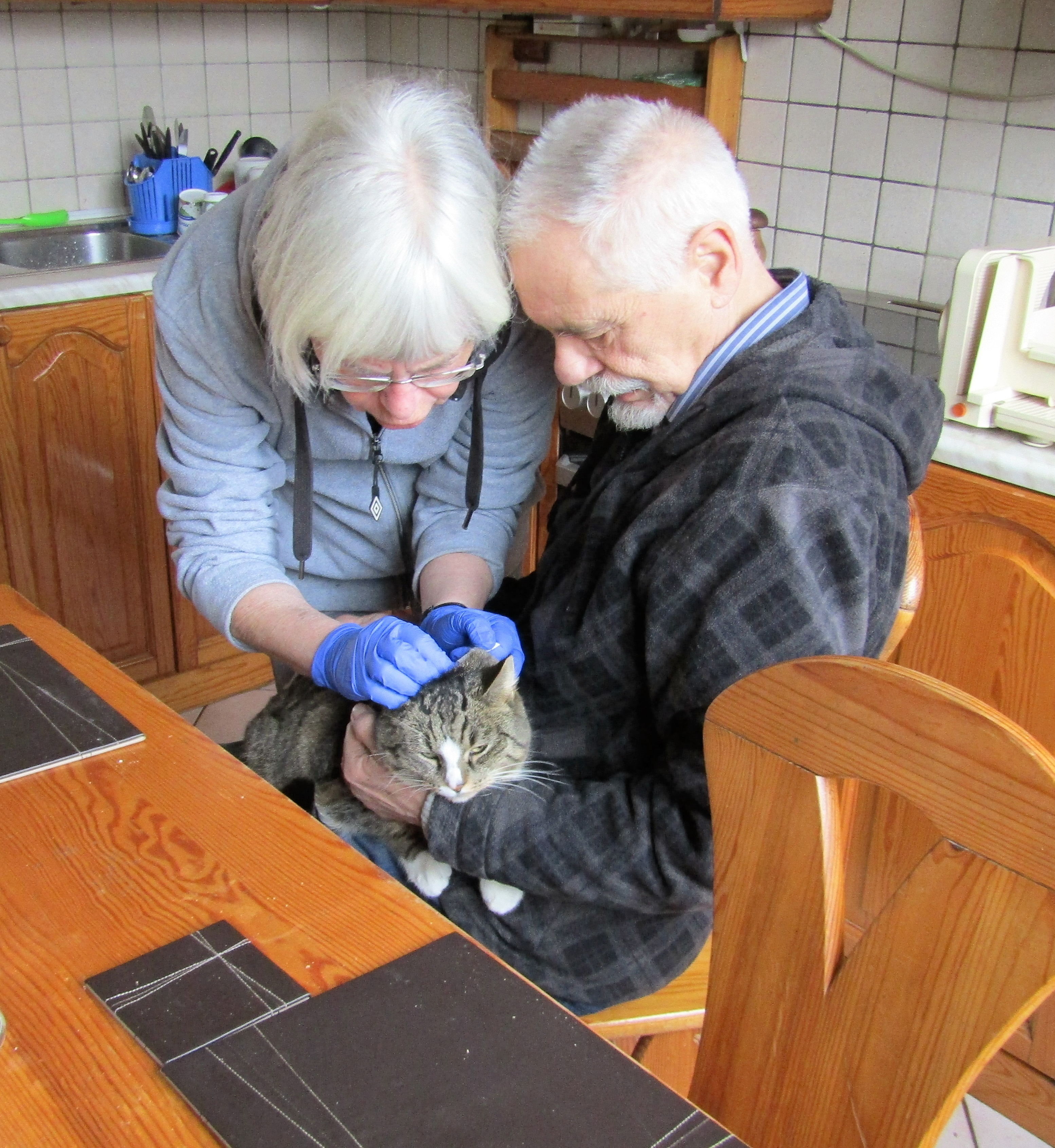 Lagniappe: I was unaware that a new species of felid had been described in 2013, the oncilla ((Leopardus tigrinus), which lives in high cloud forests from Central America to Amazonian South America. It was previously recognized as conspecific with the tiger cat (Leopardus guttulus), but was split off in 2013 from DNA evidence (a dicey proposition).  It is a bit larger than the average housecat but also lighter (1.5-3 kilograms, or 3.3 to 6.6 lb). Here’s the new felid, which is listed as “vulnerable”: