The International Humanist and Ethical Union (IHEU) reports that a man in Denmark has been charged with violating the blasphemy laws by burning a Qur’an.  It’s the first time Denmark’s blasphemy law has been invoked in 46 years.

Denmark is reactivating it’s [sic] ‘blasphemy’ law, for the first time in 46 years, charging a man for posting a video of himself burning a copy of the Quran.

The accused (aged 42) posted the video clip entitled “Consider your neighbour: it stinks when it burns” to a Facebook group called “YES TO FREEDOM – NO TO ISLAM” (“JA TIL FRIHED – NEJ TIL ISLAM“) in December 2015.

A spokesperson from the public prosecutor’s office in Viborg said: “It is the prosecution’s view that circumstances involving the burning of holy books such as the Bible and the Quran can in some cases be a violation of the blasphemy clause, which covers public scorn or mockery of religion.” The case will now be heard in court at Aalborg, and if found guilty the accused could face a prison sentence, though prosecutors say they will probably ask for a fine.

. . . The accused (aged 42) posted the video clip entitled “Consider your neighbour: it stinks when it burns” to a Facebook group called “YES TO FREEDOM – NO TO ISLAM” (“JA TIL FRIHED – NEJ TIL ISLAM“) in December 2015.

Since when is the burning of the Qur’an NOT a violation of the blasphemy law, since all such instances are at least perceived by Muslims as mocking or scorning their faith?

I’ve put the Facebook post below; you can go there and hear the song by clicking on the screenshot, but unless you speak Danish, you won’t get it. You can get the post automatically translated if you want, though the translation is pretty garbled. Perhaps a Danish-speaking reader can help. 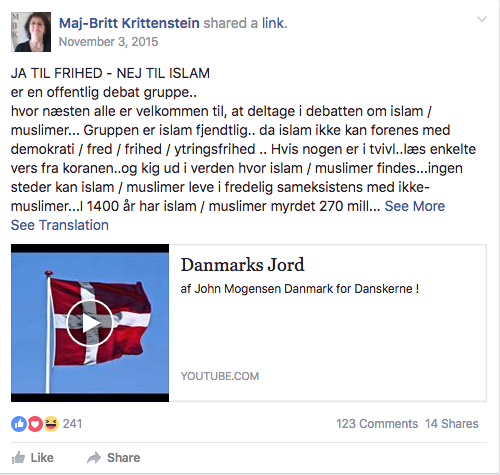 The piece by the IHEU includes comments by the head of the British Humanists and the Danish Humanist society decrying the blasphemy law, which should certainly be scrapped. Really, Denmark, why do you have such a law? Aren’t you ashamed? And why didn’t you invoke it when the Jyllands-Posten published those Danish “Muhammad” cartoons? That’s sheer hypocrisy. But, as The Independent reports:

Under clause 140 of Denmark’s penal code, anyone can be imprisoned or fined for publicly insulting or degrading religious doctrines or worship.

Only four blasphemy prosecutions have ever been attempted in the country.

The last was in 1971, when two Denmark Radio producers were acquitted after airing a song mocking Christianity.

Two people were previously fined in 1946 after acting out a “baptism” at a ball in Copenhagen, while four others were sentenced for putting up anti-Semitic posters and leaflets in 1938.

At least a dozen other cases have been considered but not charged, including in 2006 when prosecutors decided to stop an investigation into the Jyllands-Posten newspaper over a controversial set of caricatures under the headline “The Face of Mohamed”.

Frankly, I’m surprised that Denmark has such a law, and they should deep-six it immediately. Wikipedia notes that most Danes, though, support it. What the hell?:

In Denmark, Paragraph 140 of the penal code is about blasphemy. Since 1866, this law has only led to convictions twice, in 1938 and in 1946. One further charge was brought to court in 1971, but led to acquittal. The related hate speech paragraph (266b) is also used, albeit more frequently. Abolition of the blasphemy clause has been proposed several times by members of the parliament, but has failed to gain majority. Moreover, 66% of Denmark’s population supports the blasphemy law, which makes it illegal to “mock legal religions and faiths in Denmark”.

In the U.S. the failure to charge people consistently with violating a law, as they didn’t in the Jyllands-Posten case, would invalidate that law, for laws applied unequally are capricious and usually overturned.