When I first heard of the proposed March for Science in Washington, D.C., I was moderately enthusiastic. Although I didn’t think it would accomplish much, the government being what it is, I thought it might at least alert the American public to the worries of a respected group about the Trump Administration’s cavalier attitude toward the truth. After all, a recent Pew poll showed that Americans largely trust scientists to act in the public interest—even more than they trust religious leaders, and a lot more than they trust elected officials!: 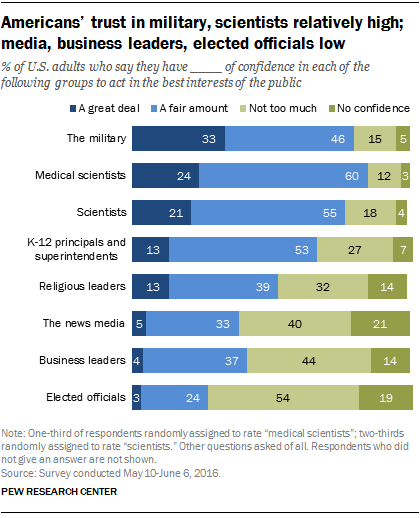 So what’s wrong with scientists marching together to emphasize our adherence to truth, and to urge politicians to not only do the same, but have some respect for the institution of science? Global warming, evolution, pollution, conservation: these are issues that science can monitor and teach about.

Well, Robert S. Young, a professor of coastal geology and director of the program for the study of developed shorelines at Western Carolina University, begs to differ. In an op-ed in today’s New York Times, “A scientists’ march on Washington is a bad idea,” Young says that such a march would erode scientists’ image by polarizing the public against them, making the electorate think that we’re just another political special-interest group:

But trying to recreate the pointedly political Women’s March will serve only to reinforce the narrative from skeptical conservatives that scientists are an interest group and politicize their data, research and findings for their own ends.

. . . A march by scientists, while well intentioned, will serve only to trivialize and politicize the science we care so much about, turn scientists into another group caught up in the culture wars and further drive the wedge between scientists and a certain segment of the American electorate.

Why does Young say this? Well, his answer isn’t that convincing. He discusses his own co-authorship of a 2010 scientific report for North Carolina’s Coastal Resources Commission, which found that sea levels could rise up to 39 inches by the end of the century. That didn’t sit well with either politicians, or, especially, real-estate developers, who didn’t want people to be wary of buying property near the coast. Young’s report was ignored, and the legislature even passed a law barring state agencies from making plans or regulations that took into account a rise in sea level!

That was dire, but from that experience Young concludes that political effectiveness can’t come from just speaking the truth; it requires getting politicians and businessmen to develop a close personal relationship with their Scientist Saviors:

What I learned was that most of those attacking our sea-level-rise projections had never met me, nor my co-authors. Not only that, most of the public had never met anyone they considered a scientist. They didn’t understand the careful, painstaking process we followed to reach our peer-reviewed conclusions. We were unknowns, “scientists” delivering bad news. We were easy marks for those who felt threatened by our findings.

. . . Rather than marching on Washington and in other locations around the country, I suggest that my fellow scientists march into local civic groups, churches, schools, county fairs and, privately, into the offices of elected officials. Make contact with that part of America that doesn’t know any scientists. Put a face on the debate. Help them understand what we do, and how we do it. Give them your email, or better yet, your phone number.

. . . . Scientists marching in opposition to a newly elected Republican president will only cement the divide. The solution here is not mass spectacle, but an increased effort to communicate directly with those who do not understand the degree to which the changing climate is already affecting their lives. We need storytellers, not marchers.

Well, Young does have a point here. Scientists don’t lobby nearly as much as they should, but of course we’re busy doing science. And the kind of intensive labor Young’s calling for isn’t in the cards—not unless scientists are allowed to hire lobbyists. Well, we can’t do that, and federal science agencies are also prohibited from lobbying. Yes, of course we should try to enlighten our public officials about science, but what Young says doesn’t convince me that a Science March is going to make things any worse for scientists and science funding.

What does make me worry is the increasing politicization of the March, which is fast changing from a pro-science march to a pro-social justice march. Now there’s nothing wrong with marching in favor of minority rights and against oppression, but if you mix that stuff up with science, as the March organization seems to be doing, well, that is a recipe for ineffectiveness. What would be the point of a march if it’s about every social injustice, particularly when, as the organizers did, they indict science itself for its racism and support of discrimination? The statement of aims below from the March’s organizers has now disappeared, but the tweet below that is still there. (You can find the full statement archived here.)

We hear you, we thank you for your criticism. In the March for Science, we are committed to  centralizing, highlighting, standing in solidarity with, and acting as accomplices with black, Latinx,  API, indigenous, Muslim, Jewish, women, people with disabilities, poor, gay, lesbian, bisexual, queer, trans, non-binary, agender, and intersex scientists and science advocates.

We recognize that many issues about which scientists as a group have largely remained silent -attacks on black & brown lives, oil pipelines through indigenous lands, sexual harassment and assault,  ADA access in our communities, immigration policy, lack of clean water in several cities across the country, poverty wages, LGBTQIA rights, and mass shootings are scientific issues.

Science supports discrimination? No it doesn’t. Some (but by no means all) scientists support discrimination, but most of us don’t. And there’s that claim about social issues being scientific ones:

If a March has any chance of being effective, it can’t consist of a bunch of penitentes who flagellate themselves loudly and publicly for bad behavior. After all, stuff like “immigration policy”, “native rights”, and many other issues of social justice are not, as the organizers maintain, “scientific issues.” They are moral issues, which means they reflect worldviews and preferences that are not objective. Of course once you set your goals on immigration, pipeline locations and who should not be near them, and so on, then science can inform your actions. But to claim that all issues of social justice are “scientific issues” is palpably wrong.

If we are to march, we should march in unity for truth, and against those who reject empirical truth. What unites all science—and makes it unique—is that it is a universal toolkit, used in the same way by members of all groups, regardless of gender, ethnicity, or religion. That is what holds us together. If we start dragging in issues of social justice—and I’m not of course saying they should be ignored in other venues—then we divide not only ourselves, but separate ourselves from much of the electorate, who, as we’ve seen above, generally trust us.

But the retraction of the statement makes me think that perhaps the March will develop decent aims in the end.

Readers: please weigh in below. Perhaps you disagree with me, or with Young.

107 thoughts on “Is the March for Science a bad idea?”