Physicist Lawrence Krauss, always a writer, has now in the Age of Trump become a pro-science activist as well. Wearing that hat, he published two articles just yesterday, one in the New Yorker and the other in the New York Times, both about Trump’s missteps in choosing his cabinet.  The New Yorker piece, “Donald Trump’s war on science,” details what most of us know, but what might be outside the radar of New Yorker readers. The cabinet is loaded with people whose mission is to undermine each post, including the denial of human-caused global warming, the desire to produce more fossil fuels, and do it on public land, reduce earth-monitoring for temperature and other variables, and, as seen in Betsy DeVos (the next Secretary of Education), a general dislike of science that might extend to evolution. Although DeVos’s husband is a creationist, I’m not sure whether she is, but there’s plenty of cause for worry:

Along with her husband, DeVos is an active member of the Christian Reformed Church in North America, a small Protestant denomination with the stated belief that “all scientific theories be subject to Scripture.” According to the church’s official statement on science, “Humanity is created in the image of God; all theorizing that minimizes this fact and all theories of evolution that deny the creative activity of God are rejected.” DeVos attended Calvin College, which is owned and operated by the Christian Reformed Church. She majored in business administration and political science. (She does not have a degree in education.) And although she has not spoken out directly on issues such as evolution and the Big Bang, her husband advocated teaching intelligent design alongside evolution in science classes during his 2006 gubernatorial campaign. “I would like to see the ideas of intelligent design—that many scientists are now suggesting is a very viable alternative theory—that that theory and others that would be considered credible would expose our students to more ideas, not less,” he said. Given her strong support of his campaign, and their joint investment in both conservative and religious causes, as well as her own religious background, it is reasonable to expect that her views do not significantly diverge from his. (DeVos did not respond to requests for comment.) 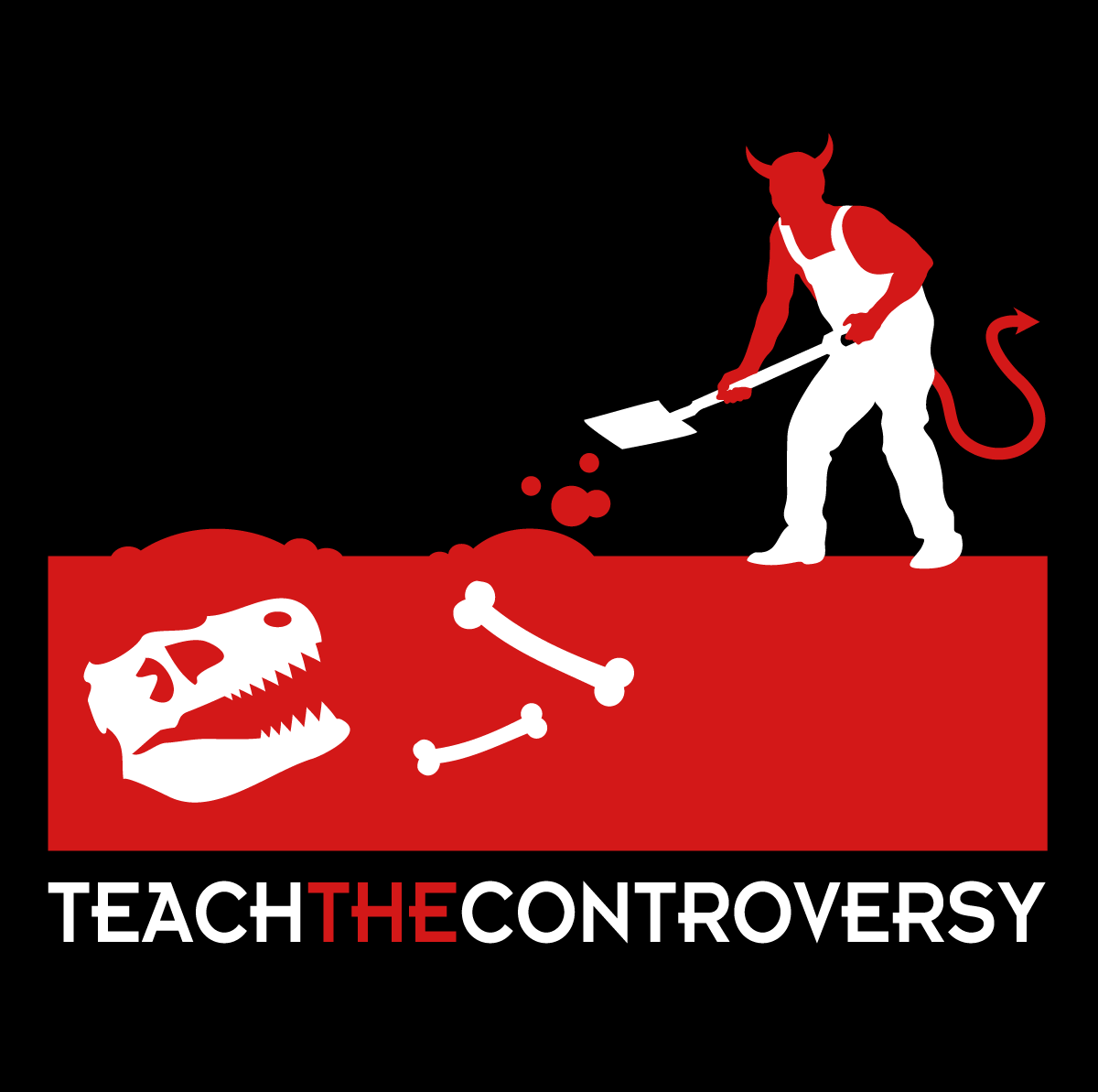 Well, Krauss is probably right here, but before we go all Chicken Little, the press should ascertain what DeVos’s actual views are. Apparently the New Yorker tried, without response, but her confirmation hearing could include such inquiry. And, at any rate, teaching creationism given present law is not legal in public schools. What a 5-4 conservative-majority Supreme Court could rule, however, is another issue.

Krauss goes on to express a view familiar to readers here: “teaching the controversy” is not fruitful when there isn’t a real controversy, just a bunch of religionists who want Jesus taught in the classroom. That is not a scientific controversy, but a fight between faith and fact.. And if you’re going to teach ID and creationism, why not astrology in a psychology class, or acupuncture and prayer-healing in medical schools? Have a look at the article that Richard Dawkins and I wrote in the Guardian in 2005—”One side can be wrong”— about what the real controversies in evolutionary biology are.

There is nothing respectable about the idea of “teaching the controversy,” as intelligent-design advocates describe it. We don’t teach modern astronomy by suggesting to students that they feel free to decide for themselves whether the sun orbits Earth or vice versa; instead, we teach them how scientists discovered the realities of our solar system, despite considerable pressure to renounce their own discoveries. Similarly, students should be encouraged to understand that evolution is not some principle laid down on high by a conclave of scientists; they should explore the various empirical tests to which it has been subjected for more than a hundred and fifty years. The purpose of education is not to validate ignorance but to overcome it. It should be easy, therefore, for Congress to make sure that DeVos isn’t planning to drive our educational system off a scientific cliff. During her confirmation hearings, DeVos should be asked whether she thinks it’s appropriate to teach intelligent design alongside evolution in biology classes, or whether young-Earth creationism should be presented alongside the reality of a 4.5-billion-year-old solar system in physics class. An answer in the affirmative to either question should disqualify her as the highest federal government official overseeing public education in this country. If Congress doesn’t exercise its obligation to insure the competence of Presidential appointees like DeVos, then voters need to hold them accountable in the next election.

But look at this data (a slide I use in some lectures). It shows the result of a Harris poll in 2005: 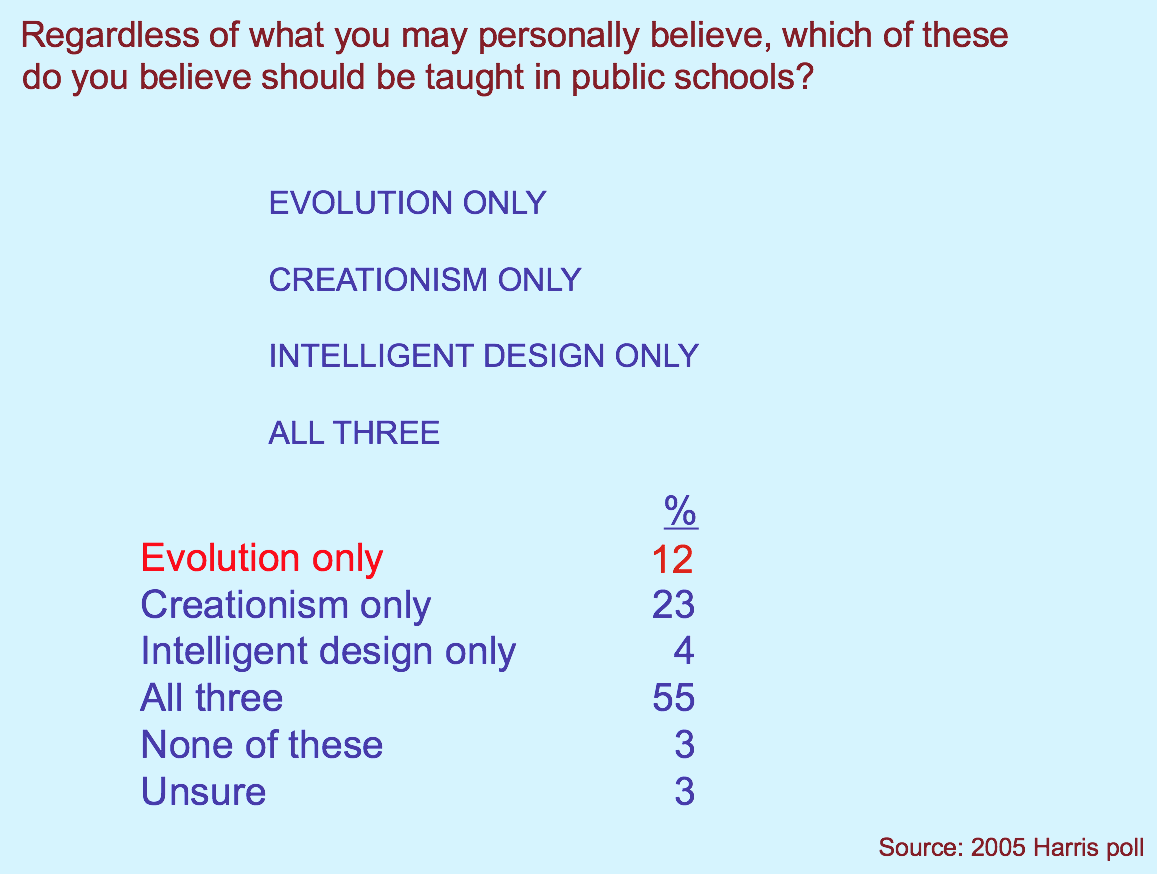 Here are the results of two polls published by Pew; the data aren’t identical but still depressing:

Given that, it’s unlikely that most voters (or even the benighted Congress) would give a rat’s patootie about what DeVos said. Yet Krauss is right: the new Trump cabinet is not only made up of ill-qualified plutocrats, but shows no sign of being on board with science. What we can do about that, though, only Ceiling Cat knows.

Lawrence’s other piece, in the New York Times, is “Rick Perry is the wrong choice for energy secretary,” and is well argued; I leave it to you to have a look.