The new Jesus and Mo strip, called “dear”, came with this note in the email alert:

Religion demanding respect again, and getting it.

The link to “getting it” doesn’t work, but it’s about the British gymnast Louis Smith, who got a two-month ban from his gymnastics governing body for getting drunk at a wedding, shouting “Allahu Akbar,” and pretending to pray toward Mecca. Tasteless? Surely, but it’s free speech and doesn’t deserve this kind of ban. I agree with the Guardian’s Marina Hyde, who said this:

Leaving those debates for another column (a column which I myself have written at least twice), sports are commonly agreed to be competitive physical activities. Capable of being inspiring, certainly, and frequently places where great spirit and whatnot is on display. But above all: sports. Not established value systems, and certainly not a forum for creating pseudo‑case law on free speech. To pretend otherwise is a dangerous category mistake.

. . . Then again, perhaps it is all of a piece. The same type of people who don’t trust the public to vote for the right sublebrities in meaningless competitions also don’t trust the public to be able to come to its own conclusions about an obviously stupid twat like Louis Smith. As I say, he is evidently a stupid twat (you could tell on Strictly, innit – and I’m not even getting into the man-bun). Yet what is more satisfactory in a case where there is no reasonable evidence of incitement to violence: that grown-ups come to that judgment themselves? Or that British Gymnastics, of all post-parodic entities, enacts a de facto blasphemy law?

When I heard about Smith’s ban, I thought, “I wonder if they’d ban him for mocking Christianity instead of Islam?” Hyde raises the same issue:

. . .  What if an athlete was of the belief that The Life of Brian was an excellent movie, or that Father Ted was hilarious? Naturally, something tells me mocking mass would be rather less frowned upon than mocking the call to prayer. But why on earth can’t athletes be derogatory about people’s beliefs?

As for British Gymnastics, it doesn’t appear to be anywhere near learning any useful lessons – but then, it takes its lead from the benighted fools at UK Sport, who bang on about the privilege of representing a country at the same time as cravenly denying that country’s essential freedoms. In many ways, it’s an old hypocrisy. Governing bodies have long come down like a ton of bricks on any athlete who gets political – yet I can scarcely think of anything more absurdly political than British Gymnastics operating a blasphemy law.

Well, watch the video that got Smith in trouble, and weigh in below about whether he deserves to be banned:

But I digress; here are Jesus and Mo: 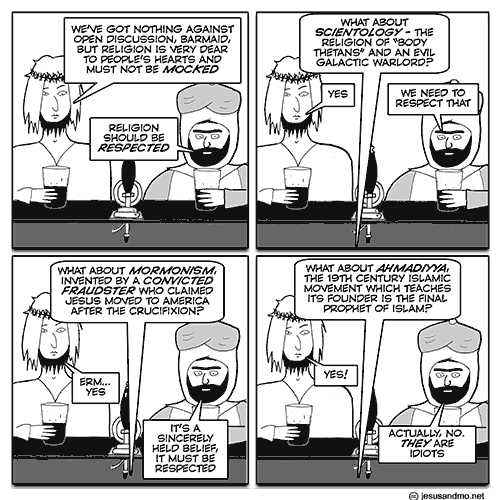 You can read more about Ahmadiyya here, and see why its members are considered infidels by other Muslims who see Muhammad as the final prophet.