A question I’m always asked in popular lectures on evolution is this: “Are humans still evolving?” The answer I give is “Yes, but we have good evidence for such evolution in only a handful of traits: evolution of earlier reproductive maturity in females, later menopause, and selection for reduced blood pressure and a few other traits related to heart disease.” That is based on longitudinal studies of human health over decades, observing changes in these traits and presumed estimates of the genetic basis of their variation.

Now, however, we can, by DNA sequencing, look at DNA directly, and with some fancy statistical footwork, get an idea of which genes have changed in frequency so fast that they must have been due to positive natural selection. That’s the subject of a new paper in Science by Yair Field et al. (reference and free download below).  The authors conclude that several traits, including lactose tolerance, hair and eye color, and parts of the immune system, as well as height, have evolved within the last 2,000 years.

A short primer on how they did it. The authors looked at 3,915 sequenced genomes in the UK population trying to find evidence of recent selection. How does that work? Well, if a rare allele suddenly becomes favorable, it will rise quickly to high frequencies, dragging along with it the DNA in regions adjacent to the selected sites (recombination wouldn’t have time to separate the selected site from adjacent sites on the chromosomes, since recombination is rare between closely spaced bits of DNA). This means that a region of the genome around a recently selected bit of DNA would be genetically depauperate compared to the same stretch of DNA that isn’t around a selected nucleotide.  Then, if you look at variable DNA sites in that region, where more than one base pair is segregating at a single site, regions around a selected site would have fewer such “singletons” because they’d be genetically homogenous. And that, in turn, would mean that in regions near selected bits of the DNA, the distance between “singleton” (variable) sites would be larger than in alleles not subject to recent positive selection, since selected forms of genes would be linked to fewer variable singletons.

The authors figured out the statistics of the distribution of the inter-singleton-site distance in the sequenced genomes compared to alternative “alleles”, looking for those regions that showed significantly longer inter-singleton distances around a site that differed between forms of a gene, and thus a site that might have been subject to selection. That indicates that, with all probability, the target site between the singleton DNA bases rose to high frequency fairly recently.

How recently? The authors say that their method is best at detecting selection events (“sweeps”) in the last 2,000 years (about 75 or fewer generations). What did they find? Here’s some figures showing those genes (and traits) whose statistics indicate they were subject to selection during roughly the last two millennia.

Lactase persistence: the gene for digesting lactose, lactase, is usually turned off at weaning. In “pastoral” populations—those that keep sheep, goats or cows and drink their milk—there’s strong selection (a roughly 10% reproductive advantage) to keep the gene turned on, giving you a rich source of nutrients. And that gene shows recent signs of selection (see the longer distance between singletons around the A/A “lactase persistence” allele compared to the alternative heterozygote [G/A] and non-persistent [G/G] form). We knew this in fact from other data over the past decade, but it’s reassuring to see it with these authors’ statistics: 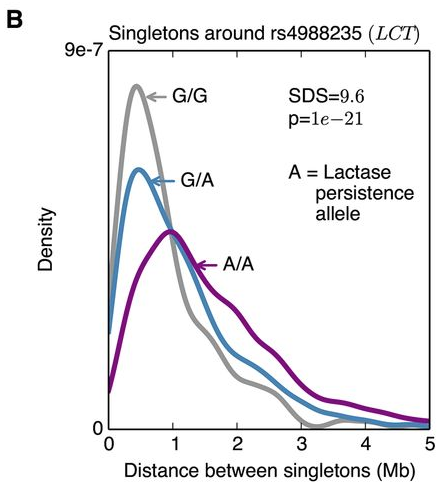 Genes associated with pigmentation. Although the loci for skin color, presumably subject to selection for light skin in northerly climates, didn’t show a significant signal of selection, other genes associated with pigmentation, like blond hair, freckling, blue eyes, and so on, did. The four dark boxes are highly statistically significant, and if you combine all the data, the probability that this association is due to chance is miniscule: 0.000000003. Lighter pigmentation was selectively favored in the British sample. There are several theories of how such selection works, but I won’t go into them now. 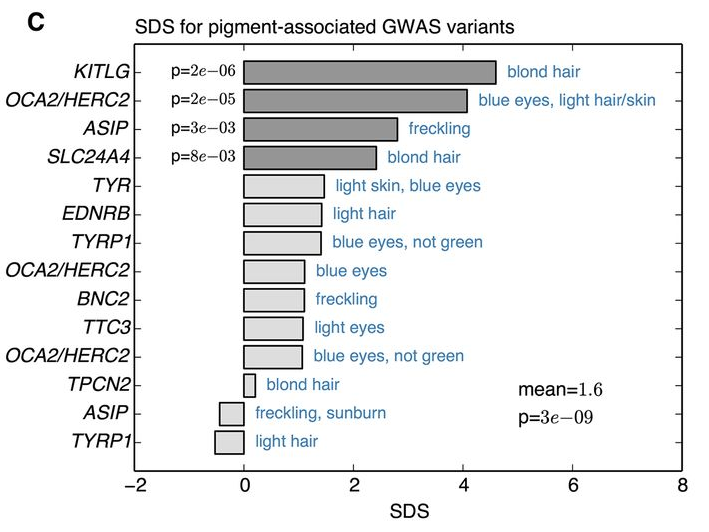 Genes for becoming taller. Here’s a plot of the distance between singletons for height increasing alleles (combined across several genes thought to be involved in height) compared to alternative alleles that make you shorter. Although the displacement of the graphs looks minor, the probability that the distributional difference occurred by chance is 0.000000000001. 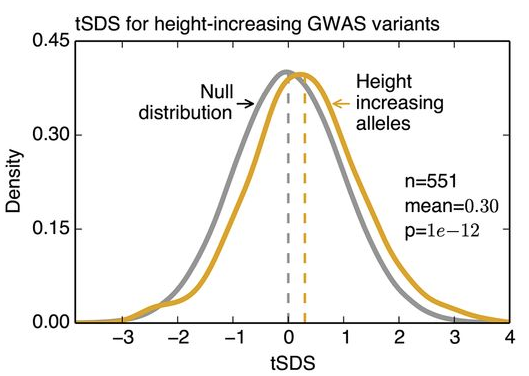 The Major Histocompatibility region, involved in the immune system, is subject to “balancing selection”, with individuals having two forms of a gene deriving a selective advantage, presumably because they have a more responsive immune system. This, too, inhibits recombination around each selected allele, increasing the inter-singleton distance. This locus also shows highly significant differences from other regions.

Other genes. Finally, there is a host of other genes that give suggestions of having been recently selected: genes or “polygenic” (several-gene) traits. The traits or genes with the purple dots show significantly longer inter-singleton distances, but the authors are a bit less willing (except for height in both sexes) to say these genes and traits were subject to selection because there’s a problem of population structure (non-random mating across the entire group) that could make these differences appear more significant than they are. But here’s the figure just to show you what might have been selected (the pluses and minuses show the direction of evolutionary change).

The upshot: In the last 2,000 years, there’s good evidence that lactase persistence and lighter pigmentation have been positively selected in the British sample of genes, that the MHC complex has been under balancing selection, and that the UK population  has been selected to get taller (you can devise your own explanations for that). Along with the putatively selected traits in the figure just above, this considerably expands the list of characters that have been selected in our species in recent centuries. Anybody who claims that human evolution has stopped is simply talking nonsense.