It’s unbelievable to any rational person—but not those who have read postmodern philosophy or discourse—that anyone can deny there’s an objective reality in the Universe, that we can know about it through science, and claim as well that science is merely a “social construction”. These misguided people argue not only that there is no objective reality, but that attempts to find and teach it are sexist: that such endeavors are masculine ones, and that the methods of science themselves make the discipline sexist and patriarchal.

Those who make this claim, as does Laura Parson in a paper in The Qualitative Report (reference and free link below), advocate a brand of “feminist science” that is more cooperative and less competitive. Well, that’s a suggestion worth considering, as is the idea that we need to make science more welcoming to women. But along with this goes the notion that there really isn’t any objective truth to be found: that science is, in the end, like lit-crit, a farrago of competing claims that can’t be adjudicated. Let a thousand truths blossom! They’re all true in their own way.

Parson also makes the claim that there are female “ways of knowing” that differ from male ways of knowing, implicitly arguing, as did Evelyn Fox Keller in her biography of geneticist Barbara McClintock, that women can have a “feeling for the organism” that differs from the scientific behavior of males. This is a claim that men, by their very nature, are incapable of finding some truths about nature accessible to women.

Parson is a doctoral candidate in the “teaching and learning department” in the University of North Dakota’s higher education concentration.  And, it seems, she’s drunk the “no objective truth” Kool-Aid in her attempt to ferret out misogyny in the syllabi of STEM courses. Like many of these feminist-imbued analyses, like ones I’ve posted about glaciology or Pilates, Parson’s study masquerades as an objective attempt to learn something, but is really an ideologically-freighted exercise in confirmation bias, for she already knows what she wants to find: male views conditioning the way science is done. Her paper centers on the language in syllabi of STEM courses. You can see the confirmation bias in the abstract of her paper. Here’s an excerpt:

This study explored the gendered nature of STEM higher education institution through a feminist critical discourse analysis of STEM course syllabi from a Midwest research university. I explored STEM syllabi to understand how linguistic features such as stance and interdiscursivity are used in the syllabus and how language and discourses used in the syllabus replicate the masculine nature of STEM education.

And of course she finds what she wants—the “understanding” that she assumed she’d get before she started:

Findings suggest that the discourses identified in the syllabi reinforce traditional STEM academic roles, and that power and gender in the STEM syllabi are revealed through exploration of the themes of knowledge, learning, and the teaching and learning environment created by the language used in the syllabus.

You can read the methods yourself, but they involve poring through a total of—get this—eight syllabi from college STEM courses after 2010: courses in math, chemistry, biology, physics, and geology. Parson was looking for evidence of toxic patriarchal infusion into the course syllabi. To do this, she examined “modal verbs,” pronouns, and “interdiscursivity” (parts of the syllabi that connect to other aspects of culture and society).

She didn’t find overt sexism in the syllabi, and one senses her disappointment at this. But she still found a marginalization of women in the pronouns and language used in the eight syllabi, as well as in the fallacious idea that there is objective knowledge:

Initial exploration of the STEM syllabi in this study did not reveal overt references to gender, such as through the use of gendered pronouns. However, upon deeper review, language used in the syllabi reflects institutionalized STEM teaching practices and views about knowledge that are inherently discriminatory to women and minorities by promoting a view of knowledge as static and unchanging, a view of teaching that promotes the idea of a passive student, and by promoting a chilly climate that marginalizes women. First, the STEM syllabi explored in this analysis promoted the male-biased STEM institution by reinforcing views of knowledge as static and unchanging, as it is traditionally considered to be in science, which is a masculine concept of knowledge (Mayberry & Rose, 1999).

. . . In response to research question three, gender is not explicitly referenced within this corpus but the masculine or male-biased views of knowledge, learning and teaching that are seen in the STEM education institution are reinforced in the syllabus. Throughout the syllabi, knowledge is represented as static and unchanging, with some nods to collaborative and active learning to encourage students to acquire course content. Language used in the syllabi Laura Parson 114 reinforces the unfriendly and difficult nature of STEM courses, and STEM teaching is framed as the instructor’s role to deposit static knowledge into students. In those ways, the syllabi replicate the gendered STEM education institution and are gendered to the disadvantage of women.

So it’s not just objective knowledge that is masculine, but static knowledge, the view that what one finds in science is writ in stone. But that, of course, is bogus. Not only does Parson give no evidence that scientists as a whole, much less male ones, see scientific knowledge as unchanging, but ignores the many times that male scientists have not only admitted the provisional nature of scientific “truth”, but changed what was considered to be firm knowledge, like the idea that continents didn’t move or that, in the late 1800s, we’d pretty much learned everything we could about physics.

Now Parson seems to think that conveying a body of knowledge, as is common practice in STEM courses, means that knowledge must be unchanging, but she gives no evidence for that.  She concentrates instead on the “chilly classroom atmosphere”, which is promulgated not just by the idea of objective knowledge, but by things like emphasis on course prerequisites, the authoritarianism of course instructors, competitive practices like grading, and so on. The “chilly” atmosphere these things create, argues Parson, marginalizes both women minorities. Here’s one example of academic dry ice (Parson’s words in plain type, syllabus text in italics and quotes):

Also reinforcing the difficulty of the courses was the treatment of prerequisites as skills or topics that the instructor would not have time to cover in the course.

“Good algebra and trig skills are essential if you expect to be successful in this course. In addition, you are expected to have sufficiently mastered the material in Calculus I to be able to use it when needed. We will not have time in this class to devote to prerequisite materials (Lower level math).”

Instead of only listing prerequisite courses, these syllabi included prerequisite knowledge and skills, creating an even more intimidating view of the course. That language implied that not only would students be held to difficult high standards, but also that there was also a base of knowledge that was required to be successful in the course. While it is not unrealistic to include prerequisites in a syllabus, the language used to discuss the prerequisites indicated that students who had not learned or did not remember that knowledge would be unsuccessful because there was not support within the course or from the instructor. The language used in this corpus of syllabi created an impression of extremely difficult courses, which contributes to the chilly climate in STEM courses, and would be prohibitive for those not confident in those areas, such as women and minorities.

Lordy! If that kind of stuff is “chilling”, then the students need to chill out. Is there something wrong with holding students to high standards? Must everyone get prizes? In reality, such instructions tell the students what they need to have under their belts before taking a class. The presumption that this is somehow racist or sexist is completely bogus. Parson is simply sniffing as hard as she can to catch the scent of anything that could support her preconceived thesis.

I won’t go on further, except to say that Parson found what she was determined to find:

Although the corpus of syllabi explored was small, the findings from this exploration support the view of STEM courses as chilly. This suggests that there is an opportunity for STEM courses to reduce the perception of courses as difficult and unfriendly through language use in the syllabi, and also as a guide for how to use less competitive teaching methods and grading profiles that could improve the experience of female students.

Some counterarguments are presented in an earlier paper by Jill Bowling and Brian Martin, “Science: a masculine disorder?” (answer: yes) published in Science and Public Policy in 1985 (reference and free download below). Bowling and Martin claim that science, by its multiply hierarchical claims about the structure of nature, evinces a masculine bias. Here are their examples: 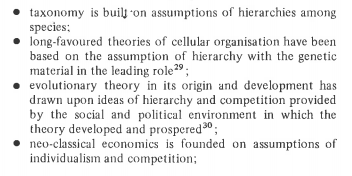 I don’t see these things as reflecting implicit sexism, but of course I’m a male.

Let me add that the idea that there are special “women’s ways of knowing” carries with it the claim that women’s brains operate in ways different from men’s. That, I thought, was anathema to those feminists who claim there are no biological differences between men and women. Now one can admit biological differences without admitting evolutionarily-based genetic differences (differences could be due to socialization), but one has to admit some sort of difference. I happen to think that there are evolutionarily based differences in behavior between men and women—mostly in sexual behavior—but I’m not convinced that there are different ways of thinking about science that should be both recognized and accommodated. I believe there are “ways of feeling” that differ between the sexes, and that some of that is due to evolution, but I am not convinced there are different “ways of knowing.” Finally:

139 thoughts on “Is the idea of objective knowledge sexist? Is there a “woman’s way of knowing”?”