As we all know, PuffHo is having a big campaign to not only make Islam seem like a Wonderful Religion of Peace, but (and more admirably) to show that not all Muslims are terrorists. But they repeatedly conflate criticism of the religion with criticism of its adherents, lumping both under the rubric of “Islamophobia”—a word that the PuffHo throws around as often as the words “and” and “the.” In fact, PuffHo rarely even discusses the problematic tenets of Islam; I guess those are either off limits or too difficult for its brain-dead readers.

In the article I discuss below, for instance, there are 24 pictures of people explaining why we should challenge Islamophobia. Not “Muslimophobia” but “Islamophobia.” This one clearly shows the conflation: 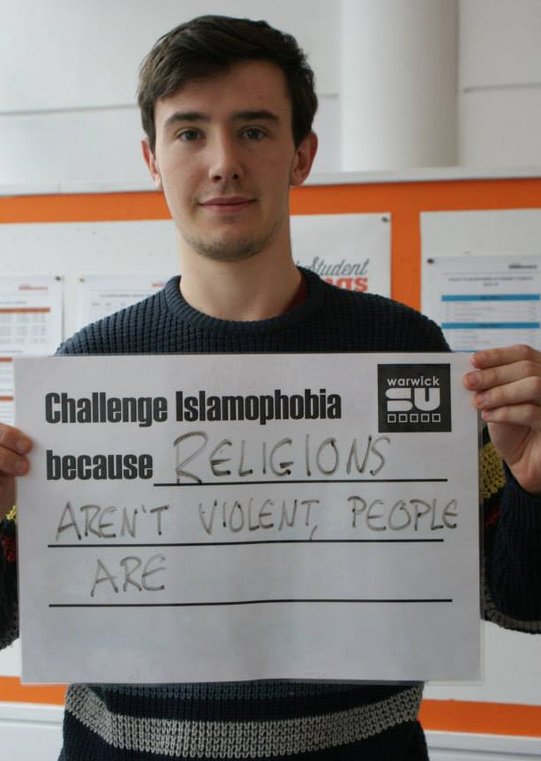 Doesn’t that remind you of a certain NRA-ish slogan about guns and people? The implication, of course, is that religion is not a source of violence—that terrorists are simply violent people who aren’t motivated by anything religious, nor even by any ideology. It’s about the stupidest thing one can say about the whole issue. After all, humans not only created religion and some of its violent dictates, but religions—Islam in this case—can be interpreted by people as condoning, sanctioning, or even urging violence. I feel sorry for the brainwashed young man above.

But on to the PuffHo article, and I’ll try to be brief. The piece, by Dean Obeidallah, is called “Coverage of the Istanbul bombing proves once again that American media care little about Muslim lives.” The rag describes the author as “a former lawyer turned political comedian and commentator. He is the host of SiriusXM’s weekly program ‘The Dean Obeidallah show.’ He is also the Founder and Editor of the blog ‘The Dean’s Report.com.'” I’d add that he’s a big-time apologist.

At any rate, Obeidallah’s contention is that because the Istanbul airport bombings weren’t covered as extensively as those in Paris or at the Brussels airport, this shows that either the American media, Americans in general, or both, think that the lives of Muslims are worth less than the lives of non-Muslims. It’s all a manifestation of Islamophobia.

Many, including myself, expected media outlets to cover this incident with at least the same intensity and breadth as they covered the Brussels terror attack in March that left 31 dead. Then we saw American news media spring into action, sending a cadre of anchors and reporters to Belgium providing “wall-to-wall coverage.”

When outlets like CNN consider a story especially important, they tend to bring out their top anchors. For Brussels, there was extensive coverage, some anchored by Anderson Cooper, showing the gravity of the situation. “Good Morning America” featured a special edition on the attacks as well. But Istanbul wasn’t afforded the same treatment. Yes, there was widespread coverage Tuesday night on cable news channels in the hours after the incident. But come Wednesday, there appeared to be little to no anchors there from major American media outlets on the streets of Turkey. We didn’t witness an outpouring of touching stories about those lost or detailed profiles about the heroism of the several Turkish police officers killed in the attack. And as the day wore on, Istanbul became just one of many big stories covered in the news.

The message sent by the American media, intentionally or not, is that when there’s an attack on a nation like Turkey that is 99 percent Muslim and the victims are primarily Muslim, it simply isn’t that important.

. . . And shockingly even when right-wing Americans plot to kill Muslim Americans on U.S soil, there’s little media coverage. You might be asking: What terror plots on Muslim Americans? Well that’s part of the problem.

There’s Glendon Scott Crawford, a Klan member, who was convicted last August in federal court for trying to “acquire a radiation weapon for mass destruction” to kill Muslim Americans in New York State. He was convicted and facing a sentence of 25 years to life in August 2015, but we didn’t see many national headlines for this story.

. . . Is the lack of media coverage because there’s an empathy gap for Muslims lives? Or is it that the media executives simply believe Americans don’t care and won’t watch stories about Muslims killed by terror attacks?

It’s not clear, but considering the news is a business, I’d suspect the second reason is more at play. After all, this week we didn’t see an outpouring of “Je suis Turkey” type postings and Facebook didn’t create a Turkey filter for your profile the way it created a France one after the Paris attack.

You get the idea. And perhaps there’s a soupçon of truth in Obeidallah’s argument. But he hasn’t considered alternative hypotheses that I think are more important. First, it’s likely that many American don’t even know that most Turks are Muslims! Yes, about 99% of them are, but never underestimate the ignorance of Americans when it comes to other countries.

Second, it’s not as if the media ignored what happened in Turkey. It was the lead story on the NBC News three days running, and the major headline in papers like the New York Times. And, as a counterexample, the 2014 kidnapping of 276 Nigerian schoolgirls, many of them Muslim, by Boko Haram, received huge media attention, prompting the “Bring Back our Girls” campaign. The fact that many of those girls were Christians didn’t bring that attention: few people even knew the religions of those girls. What mattered is that children were abducted.

Third, there’s a reason why news organizations might deploy fewer commentators to places like Turkey: they’re farther away and thus more expensive to reach and broadcast from.

But the main reason, of course, and one that I’ve discussed before, may well be this:  the the Istanbul bombings may have gotten less coverage than those in Paris or Brussels not because Americans devalue Muslim lives, but because Americans share more of their culture with Europe than with Turkey. How many Americans have visited either Brussels or Paris as opposed to Istanbul? How many Americans have lived in Europe compared to Turkey, or have friends or relatives in either Europe or Turkey? How many Americans know much about Turkish culture? This has nothing to do with dehumanizing adherents to a faith, but with feeling closer to a country that you know something about, and whose culture you’re more familiar with.

If there were similar bombings in, say, in Papua New Guinea, which is largely Christian but with a layer of (non-Muslim!) folk religions, those would probably get even less attention. Or if you’re ready to claim that that’s just because the inhabitants are largely black, substitute Vladivostok or Bucharest—white Christian cities.

As one of my friends emailed me when I pointed out this article, “Some people just have a sort of weird need to beat themselves up about things that have nothing to do with them. They are the modern-day equivalent of the old timey Catholic saints who wore hairshirts, whipped themselves and only allowed themselves small sips of warm water on hot days.” Yep, Obeidallah is certainly in that group. His article is nothing more than virtue-signaling: a way to puff out his chest and say that he’s better than the rest of us “Islamophobes.”