Again, Betteridge’s law of headlines suggests “no”, but an article in Quillette by Henry Rambow, identified as “a writer and teacher who formerly served as an evangelical missionary in China” argues that yes, moderate religion fuels fundamentalism.

Before I summarize Rambow’s piece briefly (and you should read the whole thing), let me recommend Quillette as a site you should be bookmarking. Think of it as Slate, but more serious, more intellectual, and without any Regressive Leftism. Its slant is definitely progressive, but its motto is “a platform for free thought” and it has articles like these (all are on the front page): 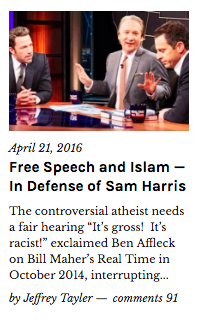 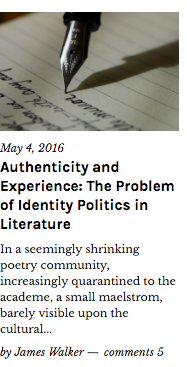 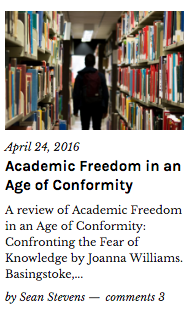 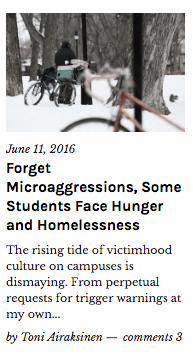 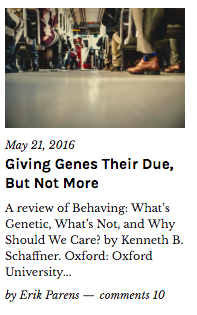 The site is just starting out, and could use some traffic if it’s to grow. If you’re a writer, consider submitting there. But do visit from time to time.

Rambow’s piece, “The Josiah effect: How moderate religion fuels fundamentalism,” is the view of a former fundamentalist Christian who now feels that his own faith enabled even more radical brands of Christianity, right up to those brands that favor death for both gays and abortion doctors. This slippery slope, you may recall, was also discussed by Christopher Hitchens in God is Not Great.

I think Rambow is right, but not necessarily for the reasons he gives. Here are his three reasons why moderate religion fuels radical and extremist faith.

First, moderate religion primes children — by the millions, if not billions — from an early age to accept without question the authority of the very same books that serve as the basis for fundamentalist ideologies, and it teaches children that the gods described in those books are worthy of worship. This renders these children susceptible to fundamentalist ideology when, as young adults, they begin seeking a purpose for their lives.

Second, moderate religion propagates and legitimizes the vehicles of fundamentalist ideology — both the texts and the rituals. The fact that millions upon millions of Americans believe that the Bible is a holy book drives publishers to print millions upon millions of copies every year. Bibles are available in every home and on the back of every church pew. And all it takes for a fundamentalist to be born is for one lost soul to pick up a copy and find a powerful sense of purpose in a literal interpretation of the text. The same is true of the Koran.

Third, moderate religion lends credibility to fundamentalism by claiming to believe in the very same gods and the very same divinely-inspired texts that are exalted by fundamentalists. If not for moderate religion, the absurdity of fundamentalist beliefs would be much more obvious. But those beliefs are not as easy to identify as absurd when billions of people worship the same god and study the same scripture. The result is that fundamentalist beliefs are seen not as ridiculous, but as merely unorthodox or misguided interpretations of an ideology that is, on the whole, widely regarded as correct.

The first point seems a bit weak, for children brought up in “moderate-faith” homes are likely to retain that moderate faith.  Yes, some may become more radical if their religion has weakened their bullshit detectors, but I’m not sure that there are more converts from moderate to fundamentalist Christianity than the other way around.  I’m speaking here about Christianity, and am not sure if moderate Muslims, for example, are more likely to become Islamists or jihadists than vice versa.

The second point, the texts—and let us not pretend that the Christian Bible isn’t violent, misogynistic intolerant, and homophobic, at least in the Old Testament*—are a big worry for Rambow. That, in fact, is why he calls his piece “The Josiah Effect”, for in the Bible Josiah commits unspeakable acts in the name of God. But let us remember that while some Christians fundamentalists are intolerant (think Kim Davis), few turn to murder, and I doubt that you’d find as high a proportion of Christians damning homosexuality, urging the stoning of adulterers, or promoting the murder of non-Christians and ex-Christians, as you would among Muslims (see here). The fact is that Christianity’s worst aspects have been hugely de-fanged by the Enlightenment, something that hasn’t yet happened to modern Islam.

The third point is pretty much the same as the second, and I won’t say more about it.

Rambow’s arguments do make sense, but religious people would argue that he’s neglecting the good that religion has done.  While Rambo mentions the damage that fundamentalist religion does, and by proxy its supposed moderate facilitators, he doesn’t even consider the argument that, on balance, religion does more good than bad. Before you argue that moderate religion is bad because it promotes extremist religions, you have to show that the whole enterprise is bad for humanity.

I happen to believe that it is, but, as I’ve said before, I can’t prove it (nor can religionists prove otherwise), for how can you weigh the intangible benefits of faith versus the tangible deaths of gays, the terrorization of children, the oppression of women, and the endless faith-against-faith wars caused by religion? (Perhaps someone can at least tot up the lives lost versus lives saved.) But we can at least argue that it’s better to know the truth than believe in falsehoods, and I think even believers would agree with that. It’s just that they don’t have reliable ways to know the truth.

And that’s where I think Rambow misses the boat. While his three points above are reasonable, my own take is that moderate religion enables extremist religion because the former gives credibility to faith—to believing in stuff for which there is no evidence. That practice is common to both moderate and extremist religions, and is why the moderates are so loath to call out the extremists: they know that if one suddenly examines the evidence for religious beliefs, all ships sink immediately. And if you look at your own faith rationally, you’ll see that there is no more evidence for it than for those other faiths you consider false*.

It is the practice of faith; nay, the completely unjustified respect given to faith, that is the real reason moderate religions enable extremist ones. The sooner we banish from our planet the idea that it’s admirable to have strong beliefs without good evidence, the faster humanity will progress.

*Word for word, however, the Qur’an has at least twice as many violent passages as the Bible (the Bible has more violent bits but is much longer).

112 thoughts on “Does moderate religion promote the extremist version?”