As I’ve said many times before, the word “Islamophobia” has been grossly misused to mean “hatred or fear of Muslims”. But look—the word is  “ISLAMophobia”, not “MUSLIMophobia”! And there are many who do have that latter form of bigotry, including the front-runner for the Republican Presidential nomination, Donald Trump. Trump is a “Muslimophobe.”  The term “Islamophobia” is all too often used to characterize those not who dislike Muslims, but who dislike the ideology that drives many of them to perform either terrorist acts or oppressive behaviors, like the subjugation of women and the demonization of gays. While demonization of Muslims as a group is unjustified bigotry, criticism of Islam—whether you agree with it or not—is justifiable free speech, and a dialogue worth having.

Nevertheless, there are those who consider any criticism of Islam itself as “Islamophobia,” using that term to dismiss such discussion as a kind of bigotry. Religion, they say, has little or nothing to do with the acts of terrorists, or even the retrograde thinking that, according to the recent Pew Report, characterizes a surprisingly large proportion of the world’s Muslims.  When people argue that most Muslims are liberal, they either forget, ignore, or are unaware of the data from that Pew Report, a report that, while saying it characterizes the views of the world’s Muslims, did not survey countries like Iran, Yemen, or Saudi Arabia. (The fact that those countries are missing itself says something about Islam.)

Before I go on, have a brief look at the data from that report, mindful that some extremist countries were omitted: 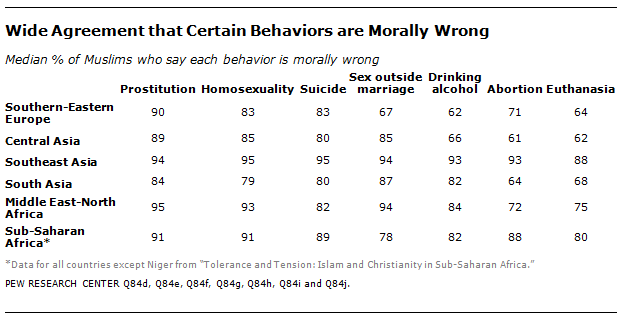 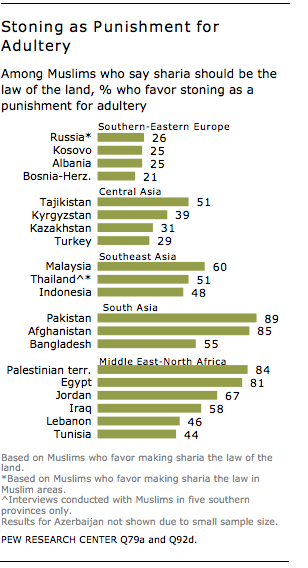 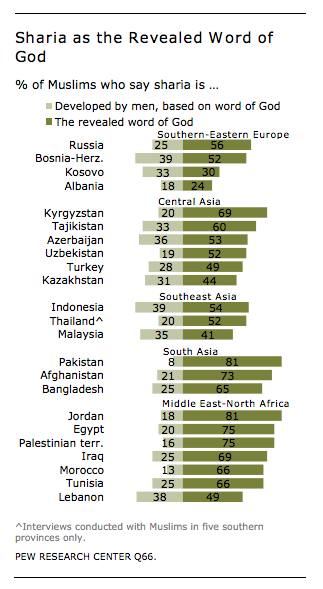 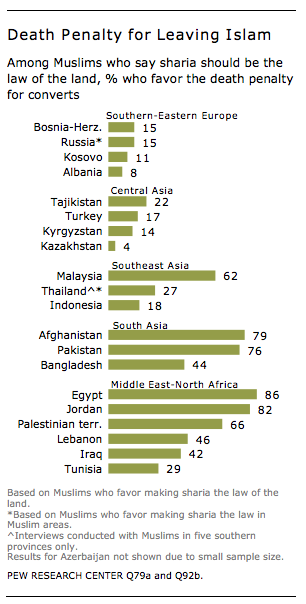 It really is hard to look at these data and claim that, worldwide, Muslims are liberal, loving, and tolerant, and that Islam is a “religion of peace.” Some Muslims are liberal and progressive, of course, but these are the statistics, expressed as averages.

And really, is there any doubt that religion can motivate awful deeds? The same people who bridle at calling ISIS an exponent of “Islamic terrorism” will gladly characterize the murder of abortion doctors as “Christian terrorism,” or blame religion on the bans on abortion in Ireland (or the disapproval of abortion by other Catholics) that led to the death of mothers whose pregnancy went wrong. And since Islam is a form of ideology, —”Islamism” is the widespread view by Muslims that their religion should guide politics (see the sharia graph above)—is it any more wrong to blame Islam on Muslim terrorism than to blame the genocide of Jews on the religiously-motivated, anti-Semitic ideology of the Nazis?

Islamic terrorists repeatedly tell us the reasons for their deeds, reasons which almost always involve religion. “Allahu Akbar,” they cry as they pull the triggers of their Kalashnikovs. Yet Westerners won’t listen: they argue that terrorism sprouts from boredom, disaffection, lack of something meaningful to do, or even Western colonialism. And yes, these factors play a role, but sans Islam, would they find an outlet? In reality, a death sentence for blaspheming Muhammad or for leaving the faith (see above), or the forced wearing of burqas and the stoning of adulterers—these acts have no meaning without Islam. How can you kill someone for blaspheming or leaving Islam if the religion didn’t exist? And why, among all religions and ideologies that malefactors use to justify their deeds, is Islam the one religion that people say isn’t really responsible?

We all know why, of course: Muslims are taken to be People of Color and are therefore oppressed. We cannot criticize their religion because that’s seen as equivalent to racism. And that’s why “Islamophobia”, even in its viable religion-criticizing form, is seen as a species of racism. That’s also why feminist and gay organizations, contravening their own principles, repeatedly support Islamic groups who would oppress women and kill gays if they ever got political power.

After noting that the Islamic Human Rights Commission (IHRC) in the UK just conferred its “Islamophobe of the Year” award on Donald Trump, Tharoor goes on to exculpate religion as a cause of Islamic terrorism. And once again we hear, in the exculpation, the notion that “things are more NUANCED than we think.” (When you hear the word “nuance” in arguments like this, you should see red flags flapping madly.) His words:

But is it worth fighting a culture war? Of course, Islam is not a monolithic thing. It’s embraced by multitudes that speak different languages, think different thoughts and grapple with different challenges every day. It has no central, governing institution and no shortage of internal debates and schisms.

My response: see the Pew survey above, probably an underestimate of the retrograde views of Muslims. There are liberal and enlightened Muslims, but look at the means. And of course there are schisms, but there’s not a lot of dissent about whether wives should obey their husbands, homosexuality is immoral, or whether sharia should be the law of the land. I wonder what people like Tharoor, or even Reza Aslan, would say when confronted with these data. Perhaps they’d echo this from Tharoor’s article:

The trouble is that pinning the radicalization and criminality of a small minority on whole communities — a whole religion, even — obscures more than it reveals. It reduces to abstraction what are far more complicated and important problems to consider, such as lapses in security and intelligence as well as troubles over assimilation and integration.

Really, does it obscure everything to argue that religion is a major cause of religious terrorism? (If you read the link above, it’s about radicalization in Europe, not in the Middle East.) And again, look at the Pew statistics. Further, blaming this criminality on “lapses in security and intelligence” is ludicrous: it’s an argument that terrorism is largely fault of the police who failed to stop it rather than of the terrorists themselves.

Finally, there’s no doubt that some of the allure of ISIS is the chance it gives for young men (and women) who have dismal futures and lousy lives to act on behalf of a Large and Glorious Cause. In such cases, part of the terrorism does spring from social disaffection. But religion gives that social disaffection a nucleus around which to accrete! After all, there are disaffected young men in South Africa, Brazil, Mexico, and many other places. Why are those feelings transformed into terrorism only by Islam? Could it have something to do with the tenets of Islam, which are of the sort to catalyze the mixture of alienation and unemployment into murder?

In one paragraph, Tharoor undercuts his own thesis:

“Promoting a clash of civilizations and destroying the reality of productive coexistence between Muslims and non-Muslims was always at the heart of al-Qaeda’s strategy. The Islamic State has avowed the same goal of eliminating the ‘gray zones’ of toleration,” writes Marc Lynch, professor of international affairs at George Washington University. “With American political discourse these days, the prospects for escaping the iron logic of this strategy have never looked more dismal.”

And that “clash of civilizations” has nothing to do with Islam?

Eventually, though, Tharoor admits that Islam might have a little to do with terrorism:

This is not to say that religion isn’t important or has nothing to do with the ideological motives of the terrorists who plainly kill in its name. One also should not ignore the fact that the attitudes of some European Muslims diverge worryingly from the liberal mainstream, as illustrated by a controversial survey of British Muslims publicized this week.

But there’s little to be gained from painting with a broad brush.

What, exactly, is the “liberal mainstream,” given that, in the survey, 35% of British Muslims (as oppose to 9% of Brits as a whole) think that “Jews have too much power,” and 52% said that homosexuality should be illegal in Britain (as opposed to 5% of the populace as a whole)? In those respects, at least, the mainstream is not so liberal. The last sentence, about what is “to be gained from painting with a broad brush,” is just the author’s biased opinion. He’s trying to deflect attention from religion by looking reasonable. But how do we know that ignoring Muslim dogma is the best way to combat “Islamic terrorism”?

Finally, Tharoor makes a pretty weak argument at the end:

Nuance and a substantive understanding of the issues, as WorldViews has noted repeatedly, are two things not particularly apparent in the current U.S. political conversation about Islam, Muslims and terrorism.

Subsequent investigations of the militants involved in the Paris and Brussels attacks have found that some had very little ideological fervor or real knowledge of Islamic doctrine. The premise that “Islam hates us” is not a useful entry point into understanding the nature of their radicalization and alienation from the society around them.

In the echo of those words I hear the voices of David Bentley Hart, Karen Armstrong, and Terry Eagleton, all saying “You don’t understand real religion. It has nothing to do with truth claims and bad acts.” And, they might add, “Christian terrorists who kill abortion doctors, or Hindus who impose the onerous doctrine of Hinduvta on their land, have very little real knowledge of Christian or Hindu doctrine.” And that may well be the case, but a nuanced understanding of religious theology is not necessary for religiously-based wickedness!

And so the apologists for Islam yammer on, busy excusing a single religion while thinking it fine to blame Christianity for Christian terrorism or the deaths due to Catholic positions on abortion or birth control. (How many Africans have died of AIDS because of the latter religious view?) The Islamophobia crowd continues to bloviate as well: the IHRC that just gave the “Islamophobe of the Year” award to Trump gave it last year to Charlie Hebdo (see Jeff Tayler’s 2015 piece on that). Yet bloggers and journalists continue to claim that Charlie Hebdo is a fount of “racist shit”, once again mistaking criticism of Islamic doctrine (or a misunderstanding of Charlie Hebdo’s cartoons) for bigotry against Muslims.

54 thoughts on “The Islamophobia card remains in play”