It’s the end of most people’s work week, and I like to finish it off with some heartwarming squee. This week I’ve been sent, or found, four items.

Let’s start with this:

And then go to Ozzie the Desk Weasel. Don’t get any ideas about adopting one, as this is a rescued orphan and weasels can be really bite-y pets. But Ozzie seems tame, and it’s nice he was rescued. His staff’s notes:

Yup, he loves to play. So do I. But before I get to go online and start killing, I’m being camped by this fearless fighter. But then again; his ping is so much lower than mine…

Disclaimer: A weasel is not a pet. They hate being locked up, they’re not friendly when hungry. Don’t get one. Seriously. Ozzy is a special case rescue baby. Cute, but deadly. 😉

Another cute video of Ozzie is here.

And meet Cujoe, a kangaroo whose mom was hit by a car. He’s been adopted by a policeman in Cue, a small town north of Perth, and you can read about it in the PuffHo piece, “Cop saves orphaned baby kangaroo“.

Click on the screenshot to see Cujoe’s savior, Constable Scott Mason, and watch the joey try to find a pouch in Mason’s teeshirt: 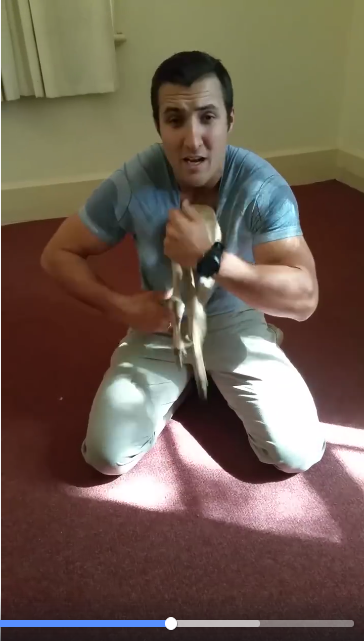 Finally, here’s the lovely story of an oil-soaked penguin, Dindim rescued by a kindly Brazilian man who cleaned it up. The Magellanic penguin (Spheniscus magellanicus) apparently bonded with the man and so, every June the penguin shows up near Rio and spends eight months with Mr. Pereira de Souza before departing to breed in southern South America.

15 thoughts on “Friday squee: three rescued animals in love with their mentors”