We usually think of “blasphemy” as a crime committed against Islam, but it’s also a crime to mock religion in many places. Those include India, where people have been prosecuted for “insulting” Catholicism and Hinduism. And remember the three people jailed in Myanmar for advertising an event at a bar with a poster of Buddha wearing headphones? That violated that country’s laws against “denigrating religion.”

In fact, blasphemy laws are widespread. The Wikipedia article on “blasphemy law” gives this map of countries having such laws, and the possible punishments. Note that the death penalty is applied only in Muslim-majority countries, but even in Canada “blaphemous libel,” which mocks Christianity in a manner deemed not in good faith, is illegal, as it is in New Zealand, where you can be jailed for it. (In both places the laws are rarely enforced, but having them on the books is an offense to free speech.)

And while we’re on the subject of Canada, they still enforce “hate speech” laws that may incite “extreme feelings of opprobrium and enmity against a racial or religious group.” Finally, blasphemy, defined as “publication or utterance of blasphemous matter” against religion, is still illegal in Ireland. 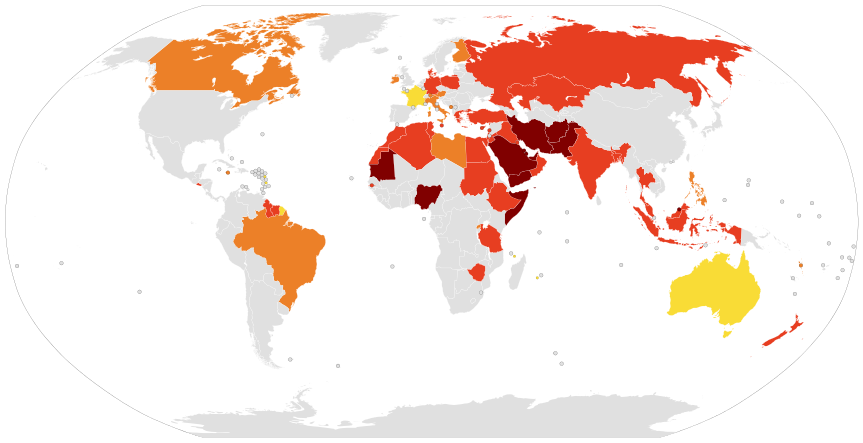 We don’t hear much about blasphemy in India, which is far away, but such cases will become increasingly visible since the right-wing and pro-Hindu Bharatiya Janata Party came into power.  Famously, my Chicago colleague Wendy Doniger’s book The Hindus, An Alternative History, was banned, with all copies on sale in India ordered pulped, on the grounds that she denigrated Hinduism. (Needless to say, she didn’t.)

The present case involves a famous cricket player. I hardly know anything about cricket, but I have heard of M. S. (Mahendra Singh) Dhoni, the ex-captain of India’s cricket team and one of the best wicket-keepers and batsmen of our time. Dhoni appeared on this magazine cover: 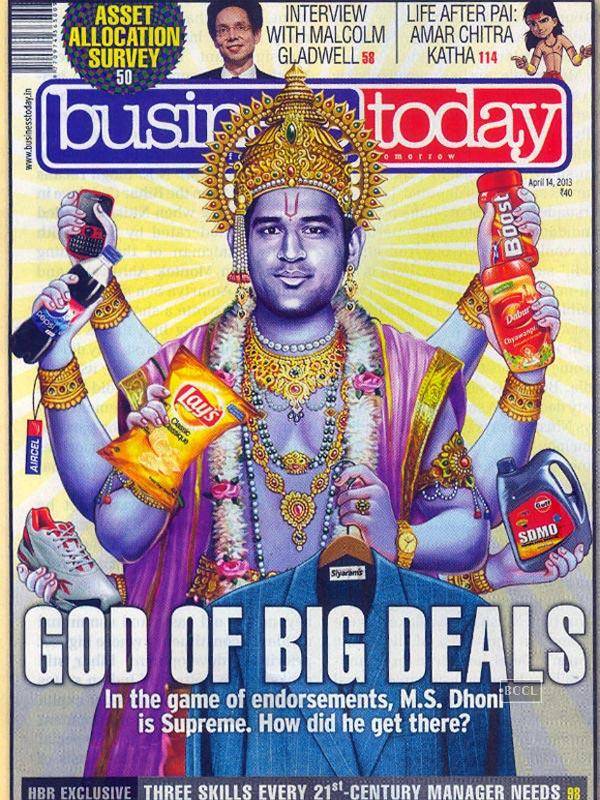 According to today’s Hindustan Times, Dhoni’s in trouble for this again (he was previously let off by the Supreme Court for the same image):

A local court in Andhra Pradesh on Friday issued non-bailable arrest warrant against cricketer Mahendra Singh Dhoni in a case accusing him of hurting religious sentiments by appearing as Lord Vishnu in a magazine cover holding a shoe in his hands.

Dhoni, who is in Australia for a limited over series, was not available for comments but his lawyer and manager said the one-day captain was never issued summons in the case.

The case against Dhoni, 34, was filed by a VHP leader in Anantapur town for allegedly hurting religious sentiments of Hindus while posing as the deity in the cover of Business Today magazine in April, 2013. The magazine’s report titled ‘God of Big Deals’ was on the brand value of the former Test captain.

The court of the additional judicial first class magistrate has asked police to produce Dhoni on February 25.

Of course Dhoni’s holding products other than a shoe (this article is about his lucrative endorsements), but showing the bottom of your shoe to someone in India is considered rude and uncouth. When you sit on the floor, you always tuck your feet under, never pointing your soles at someone.  Once I was chased into an Udaipur post office by a cycle-rickshaw driver who tried to exort a big fare from me (he got lost and tried to charge me a whopping fee for the time it took to find the post office), with the driver taking off his shoe and waving the sole in my face. That, I suppose, is why the article singles out the shoe rather than the soft drink.

There’s not a chance in hell that Dhoni will see jail for this, for the Indian justice system is tilted in favor of the entitled, and how could a judge put away the star member of India’s cricket team?

But others haven’t fared as well.  Indian rationalist Sanal Edamaruku was forced to flee the country after exposing a supposed “miracle” of water flowing from a Jesus statue. The “miracle” involved seepage from a nearby toilet into the statue (people had drunk the water, too!), but the exposure of fraud wasn’t good enough: Edamaruku was still accused of violating blasphemy laws, and, facing death threats and a prison sentence, fled to Europe, where he is now.