I don’t know how many readers watched Official Website Physicist™ Sean Carroll debate theologian William Lane Craig on whether cosmology gives evidence for God, but nonbeliever Carroll clearly won (I’m not unbiased, of course!). Here Carroll takes apart the argument that the so-called “fine tuning” of the physical constants of the Universe constitutes evidence for God (the “FTA”). Since, as Carroll notes, this is the most “sophisticated” argument for God in theologians’ poorly stocked arsenal, it’s incumbent on us to understand why it’s wrong. I deal with this in Faith Versus Fact, but here’s a nine-minute primer. You might want to watch it before you get drunk tonight.

Carroll is a fluid and eloquent speaker, anticipating and then answering his audience’s objections before they’re even uttered.

Carroll’s written summary of the debate, including the fine-tuning argument, can be found in his post at Preposterious Universe. Here are his five arguments (in his words) why the FTA doesn’t prove theism:

He goes on in his post to explain his own intentions and to dissect Craig’s responses.

I should add that Sean is giving the prestigious Gifford Lectures in October of next year in Glasgow. That lectureship, originally endowed to promote the study of “natural theology” (the observation of nature as evidence for God), has had some prestigious honorees. They include, for example, William James, whose talks became The Varieties of Religious Experience. Other lecturers included Paul Tillich, Hannah Arendt, Arthur Eddington, Reinhold Neibuhr, Carl Sagan, J.B.S. Haldane, and Steven Pinker.  You can see that there are some lecturers, like Haldane, Sagan, and Pinker, who weren’t espousing natural theology at all, but talking about straight naturalism. Kudos on the organizers for starting to include nonbelievers, who, after all, probably have something more substantive to say.

When I asked Sean if he was going to turn the lectures into a book, which I believe is expected, he said he already had. And indeed, the book is already on Amazon, scheduled for publication by Dutton in May. Click on the screenshot to go to the listing: 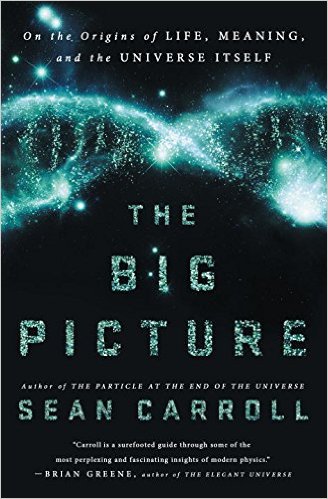 I expect that this book will be very good, summarizing Carroll’s views on the implications of particle physics and cosmology for philosophy and our own self-image. Here’s the advance summary:

In short chapters filled with intriguing historical anecdotes, personal asides, and rigorous exposition, readers learn the difference between how the world works at the quantum level, the cosmic level, and the human level–and then how each connects to the other.  Carroll’s presentation of the principles that have guided the scientific revolution from Darwin and Einstein to the origins of life, consciousness, and the universe is dazzlingly unique.

Carroll shows how an avalanche of discoveries in the past few hundred years has changed our world and what really matters to us. Our lives are dwarfed like never before by the immensity of space and time, but they are redeemed by our capacity to comprehend it and give it meaning.

The Big Picture is an unprecedented scientific worldview, a tour de force that will sit on shelves alongside the works of Stephen Hawking, Carl Sagan, Daniel Dennett, and E. O. Wilson for years to come.

I’ll be reading it for sure.