The television program that inspired the Twit**er exchange at the bottom of this post actually aired in April, but I didn’t learn some things about Iran’s odious policies towards homosexuals until I investigated that exchange yesterday, when Knight rebuked the first gentleman on Twi**er for his gross misunderstanding of what’s actually happning in Iran.

We all know that homosexuality is a legal offense in some Middle Eastern countries, as it violates Islamic law—law set out not in the Qur’an, which is unclear on the issue, but in the hadith. In Iran, homosexuality has been illegal for over eighty years, but in fact was tolerated under Shah Reza Pahlavai.

That all changed when the Shah was deposed in 1979 during the Islamic Revolution, and homosexuality and transsexuality became crimes punishable by death. Seven years later, though, transsexuals were legally reclassified as “heterosexuals.” Since gays were lashed and then executed if the whip didn’t prove a deterrent, this new policy opened a legal path for gay males to continue having sexual relationships with men. But that meant having their penis and testicles cut off, and living transgendered—as a woman.

Since we know now that being gay is not a “choice” but a behavioral imperative—and one that does not respect national boundaries—gay Iranian males either must to repress their behavior, exercise it in secret at risk to their lives, flee the country, or get sex-reassignment surgery and live as females. Many apparently choose the last option, but clearly that’s a choice made under coercion, one carrying serious medical risks. As the YouTube description notes:

Post-revolution Iran is notorious for its religiosity: when Ayatollah Khomeini came to power in 1979 he enforced strict Islamic custom that made homosexuality punishable by death. Surprisingly, though, the state treats transsexuals differently, allowing sexual reassignment surgery and in some cases even paying for it. It’s become so widespread there, in fact, that Iran is now one of the world capitals for the procedure.

But the fatwa allowing the surgery has a grim drawback: families, therapists, and the state see gender reassignment as a solution to the “illness” of homosexuality—not understanding the risks of forcing the long, life-changing process of a sex change on someone who wasn’t born wanting it. Gay Iranians now face the agonizing choice of fleeing their communities or permanently changing who they are.

A VICE program on the issue was commissioned by HBO and aired last April; the entire program is embedded below. Do watch it if you have the time, for its coverage of the issue is thorough, including personal, religious, and medical issues. It also shows that women are forced to undergo the procedure as a way to become “legal lesbians”.

Seeing homosexuality as an illness that can be “cured” by surgically refashioning the genitals of gays is certainly not an enlightened policy. Gays should of course have that option, but it’s clear that many Iranian gays get the surgery as their only viable option to either death or exile. Thus, the tweet by the first “gentleman” at the very bottom of this post—I use the term very loosely—was based on either duplicity or sheer ignorance.  That person implies that Iran’s policies toward LGBTQ people are enlightened, with the government actually favoring and subsidizing sex-change operations to help gays. But of course that’s not the situation at all: it’s largely a form of punishment, and a severe one. It’s done not to help gays, but force them to conform to religious dogma.

Those Westerners who ally themselves with Muslim extremists holding odious views like the ones discussed here, and who claim to do so on grounds of favoring the oppressed, should realize who they’re getting into bed with. That was, for instance, the mistake made by the Feminist Society of Goldsmiths College when they—and, ironically, its LGBTQ+ Society—allied themselves against Maryam Namazie and with the Islamic Society, whose own president opposes equal rights for women and gays.  That president, Muhammed Patel, has since resigned after his homophobic tw**ts came to light. Here are two of them: 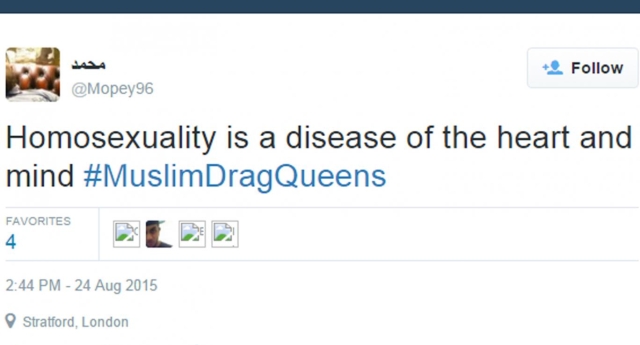 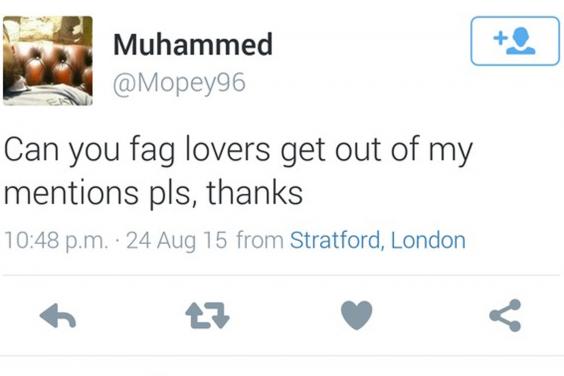 A pervasive strain of toxic western feminism is on show here. It seems they hold two books for equality: One for themselves, and one for the browner, less ‘them’ people. Like Namazie, they should be screaming from the rooftops about the oppression visited on women in the name of Islam. Instead, we have an instance where a group of men openly harassed and intimidated a woman minority (Iranian ex-Muslim), and the feminist society chose to stand with her aggressors. ’Feminists‘ siding with Islamists is akin to PETA sponsoring your local steak night. This is an utterly shameful display of moral confusion.

The double standard also applies to the Goldsmiths’ LGBTQ+ers. How dare they ally themselves with a society whose president (along with many of its members) opposes equal rights for gays, issues homophobic tweets, and stands against Namazie, who favors LGBTQ rights? What sort of twisted doublethink could create such behavior?

Actually, the Advocate site mentioned by Stephen Knight (“Godless Spellchecker”) is no longer the one in the link above; rather, it’s here.

Finally, you might find this exchange with Ali Rivzi enlightening and amusing.