As I mentioned yesterday, ex-Muslim Maryam Namazie spoke at London’s Goldsmiths College on the topic “Apostasy, blasphemy and free expression in the age of ISIS,” and her talk was repeatedly disrupted by Muslim students. You can see the interruptions below, and they’re serious, severe, and extremely rude.

Namazie has worked tirelessly for human rights and against their abrogation by some Muslims, concentrating especially on Islamic oppression of women. It’s thus ironic that her talk at Goldsmith’s was opposed by the college Feminist Society, which aligned itself with ISOC, Goldsmith’s Islamic Society.

Here’s a post from the Goldsmiths College tumblr site: 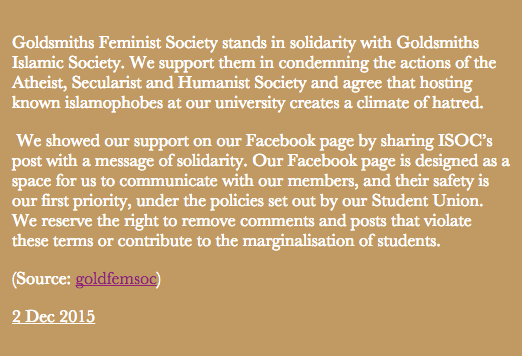 If anybody is creating a “climate of hatred,” it’s these free-speech opposers and professional “I’m offended-ites,” who clearly hate Namazie and want to keep her from speaking.  And it’s reprehensible that a feminist society would ally itself against Namazie, calling her a “known Islamophobe”, and also stand against her invitation by the Atheist, Secularist and Humanist society. Instead, they ally themselves with the Islamic Society, which stands for a religion famous for oppressing women—oppression encoded in sharia law.

This unholy alliance between feminists and Islamists is symptomatic of the cancer eating away at the Left, whose sympathy for the supposed underdog (especially those who aren’t white) all too often outweighs their support of feminist and Enlightenment values. It’s beyond me how any feminist society can support a Muslim group unless that group is outspokenly devoted to the equality of women and the dismantling of sharia law.

If you want to see how “hateful” Namazie is, here’s a long video of her speech at Goldsmith’s, which shows not only that she’s temperate but passionate, and far being strident or anti-Muslim. You can also see the bad behavior of the students—many appearing to be Muslims—who repeatedly disrupt her talk by whistling, standing up and shouting, interrupting her, and even turning off her Powerpoint presentation. How can one give a talk under such circumstances? I would have given up! It’s a testimony to Namazie that she keeps her cool through the whole thing, even as security expels some of the disruptive students:

I haven’t watched this in its entirety, but here are several instances of disruption:

The silence of atheists and Leftists about this kind of behavior is deafening.