The email accompanying today’s link to the new Jesus and Mo strip said this:

Today’s comic was spurred by Maryam Namazie’s trending twitter tag #exmuslimbecause, and the backlash it has received.

According to the BBC, that hashtag was started by the British Council of Ex-Muslims (Namazie is their spokesperson) to collect statements by Muslim “apostates” about why they’d left the faith. Apparently the site has garnered over 100,000 tw**ts in the last two weeks. The report adds, “But many Muslims are taking issue, saying that the hashtag is “hateful,” and being used as an excuse for Muslim-bashing at a time of increasing fear of Islamophobia.

Here’ are two samples of tw**ts:

Only being allowed nail polish while on my period, just cuz God is so concerned w/ water penetrating my nails, is stupid af #ExMuslimBecause

This shows graphically how much many Muslims resent criticism of their religion, to the point that they regard statements of why people left their faith as “hateful.” People who throw around those words are odious, and we must not cower in fear of their possibly violent reprisals, nor must we accommodate them—as much of the Left is doing—by conflating criticism of Islam with hatred of individual Muslims: “Muslimophobia.” When are these people, Muslims and liberals alike, going to grasp the simple point that criticizing the tenets of a religion is different from “Muslim-bashing”? Actually, I suspect many of them already know that distinction, but simply use the terms “Islamophobe” and “Muslim-bashing” as a way to silence their critics, who they know are sensitive to accusations of bigotry.

As further testimony to the hair-trigger offense culture of many Muslims, you may know that this week Namazie spoke at Goldsmiths College of the University of London, a place that’s the Mecca of British student “offense culture.” As LondonStudent reports, her topic was ‘Apostasy, blasphemy and free expression in the age of ISIS’, and the talk was was sponsored by Goldsmiths’ Atheist, Secularist and Humanist society. That’s a sure recipe for pushback, and sure enough, Namazie got it (my emphasis):

Namazie wrote after the event: “After my talk began, Isoc “brothers” started coming into the room, repeatedly banging the door, falling on the floor, heckling me, playing on their phones, shouting out, and creating a climate of intimidation in order to try and prevent me from speaking.

“I continued speaking as loudly as I could. They repeatedly walked back and forth in front of me. In the midst of my talk, one of the Isoc Islamists switched off my PowerPoint and left. The University security had to intervene and remain in the room as I continued my talk.

“Eventually the thug who had switched off my PowerPoint returned and continued his harassments. At this point, I stood my ground, screamed loudly and continued insisting that he be removed even when the security said he should stay because he was a student.” [JAC: You don’t have a right to remain at a talk if you’re disrupting it, even if you’re a student. What was security thinking?]

A student, during yesterday’s lecture, moved to turn off the main screen when Namazie showed a cartoon from the series Jesus and Mo.

. . . [Namazie] also told London Student: This very group which absurdly speaks of “safe spaces” has in the past invited Hamza Tzortzis of IERA which says beheading of apostates is painless and Moazem Begg of Cage Prisoners that advocates “defensive jihad”.

Such is the inevitable response of Muslim students in the West when someone like Namazie, who is incredibly brave, tries to discuss the inequities and perfidies of the faith she used to have. Apparently that criticism makes her an “Islamophobe.”

I have no tolerance for the protestors’ behavior, which should not only be stopped, but opposed and mocked at every opportunity. Muslims of course have every right to demonstrate peacefully when they are offended, but not to disrupt an invited speaker or issue death threats (yes, Namazie got those, too). And perhaps they might consider that while their disruptive and sometimes violent response to criticism of Islam may have temporarily cowed the Left, in the end will make the hair-trigger Muslims look petulant and ridiculous.

But I digress; here’s today’s Jesus and Mo: 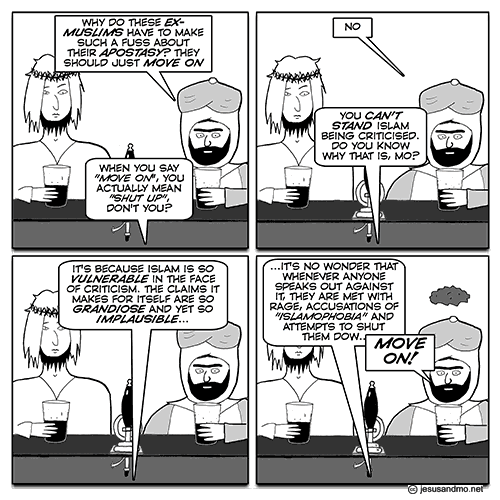