Today’s excellent Jesus and Mo refers to something you may already know about: the Paris attacks caused the Archbishop of Canterbury, the Least Reverend Justin Welby, to doubt the presence of God. The BBC recently reported this:

The Archbishop of Canterbury has said the terror attacks in Paris made him “doubt” the presence of God.

The Most Reverend Justin Welby told BBC Songs Of Praise he had prayed, asking “where are you…” after the attacks.

He said his reaction to the attacks had been “first shock and horror and then a profound sadness”, heightened because he and his wife once lived in Paris.

The gun and suicide bomb attacks on 13 November, carried out by so-called Islamic State, left 130 people dead.The archbishop said: “Saturday morning, I was out and as I was walking, I was praying and saying: ‘God, why – why is this happening? Where are you in all this?'”

“He said ‘in the middle of it’ and also in answer from Psalm 56 – ‘he stores up our tears in a bottle, none of our sufferings are lost,'” he added.

Yes, of course: Welby managed, as he always does, to find a reason why God allowed such horrors. It’s the old chestnut that all will be set right in Heaven.  For that’s surely what Welby means, unless there’s some other reason why those tears are stored up.

What I want to know is this: why didn’t any of the other atrocities in our age—all the way from the Holocaust to the depredations of Boko Haram to the suicide bombings in in Beirut—cause Welby to doubt God? Why just the killings in Paris? Does he think that God especially favors the French?

I really don’t like that man. He parades his doubt, which I see as a cynical ploy to convince wavering Anglicans in the UK that “I’m just like you,” and then, of course, resolves that doubt—this time by pulling a genie out of a bottle of tears.

But I fulminate; here’s today’s strip: 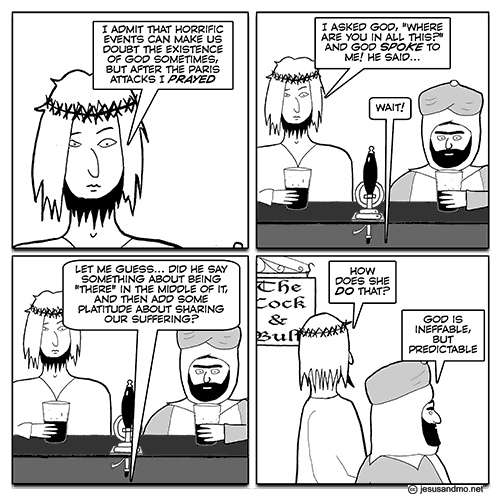 In my email, the author notified us of a contest:

Yesterday was this comic’s 10th birthday, and to celebrate we’re running a little competition (thanks to sparky_shark for the suggestion). To enter, you just have to write a script for the last panel of a J&M “X-factor” strip (see the entry under today’s comic). The script should a line from Jesus, a line from Mo (in any order), plus the off-screen judge if required. Just words, presented like this:

Here’s the strip for the contest: 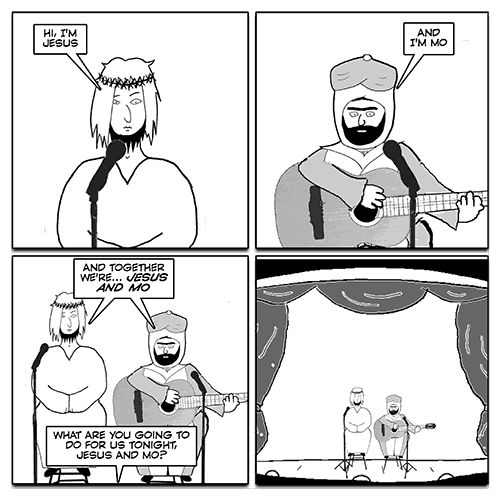 The best script will win a book of the latest collection of Jesus & Mo strips (Vol 7), plus publication on the website (anonymously, obvs). There may be runners-up prizes, too.

Oh, and if you want to send us a birthday present, please consider becoming a Patron of the Blasphemous Arts at this site.