The Daily Beast and the Washington Times both report that students at Amherst College in Massachusetts are, as some students did at Yale, protesting FREE SPEECH. It’s ironic that their right to protest in this way is made possible by laws permitting free speech. As the Daily Beast reports:

Students protesting at Amherst College have issued a list of demands to administrators that includes making them apologize for signs that lament the death of free speech.

A group calling themselves the Amherst Uprising listed 11 demands they want enacted by next Wednesday. Among them is a demand that President Biddy Martin issue a statement saying that Amherst does “not tolerate the actions of student(s) who posted the ‘All Lives Matter’ posters, and the ‘Free Speech’ posters.”

The latter posters called the principle of free speech the “true victim” of the protests at the University of Missouri.

I haven’t written about the protests at the University of Missouri, as I’ve waited to get more evidence about the incidents that sparked them, but you can see the Amherst students’ list of demands here. I reproduce it in full below, along with the long and surprising list of signatories. I find this document offensive, peremptory, and entitled. Read it all. “Demands” #4, as well as #5 and 6 (the ones asking that free speech be prohibited, and those exercising it be given “extensive training for racial and cultural competency”), and #8, and #11 are particularly invidious. Sure they can have forums to discuss this issue, and there may be real grievances that should be aired, but they shouldn’t be aired during class time.

1.    President Martin must issue a statement of apology to students, alumni and former students, faculty, administration and staff who have been victims of several injustices including but not limited to our institutional legacy of white supremacy, colonialism, anti-black racism, anti-Latin racism, anti-Native American racism, anti-Native/ indigenous racism, anti-Asian racism, anti-Middle Eastern racism, heterosexism, cis-sexism, xenophobia, anti-Semitism, ableism, mental health stigma, and classism. Also include that marginalized communities and their allies should feel safe at Amherst College.

2.    We demand Cullen Murphy ‘74, Chairman of the Board of Trustees, to issue a statement of apology to students, alumni and former students, faculty, administration, and staff who have been victims of several injustices including but not limited to our institutional legacy of white supremacy, colonialism, anti-black racism, anti-Latinx racism, anti-Native American racism, anti-Native/ indigenous racism, anti-Asian racism, anti-Middle Eastern racism, heterosexism, cis-sexism, xenophobia, anti-Semitism, ableism, mental health stigma, and classism

3.     Amherst College Police Department must issue a statement of protection and defense from any form of violence, threats, or retaliation of any kind resulting from this movement.

4.   President Martin must issue a statement of apology to faculty, staff and administrators of color as well as their allies, neither of whom were provided a safe space for them to thrive while at Amherst College.

5.    President Martin must issue a statement to the Amherst College community at large that states we do not tolerate the actions of student(s) who posted the “All Lives Matter” posters, and the “Free Speech” posters that stated that “in memoriam of the true victim of the Missouri Protests: Free Speech.” Also let the student body know that it was racially insensitive to the students of color on our college campus and beyond who are victim to racial harassment and death threats; alert them that Student Affairs may require them to go through the Disciplinary Process if a formal complaint is filed, and that they will be required to attend extensive training for racial and cultural competency.

6.     President Martin must issue a statement of support for the revision of the Honor Code to reflect a zero-tolerance policy for racial insensitivity and hate speech.

7.     President Martin must release a statement by Friday, November 13th, 2015 by 5:00pm that condemns the inherent racist nature of the unofficial mascot, the Lord Jeff, and circulate it to the student body, faculty, alumni, and Board of Trustees. This will be followed up by the encouraged removal of all imagery including but not limited to apparel, memorabilia, facilities, etc. for Amherst College and all of its affiliates via a phasing out process within the next year.

JAC: The Daily Beast says this about the “mascot” Lord Jeff: ”

They also insist the president condemn the “inherent racist nature” of school mascot Lord Jeff, a nickname for Jeffrey Amherst. Amherst was a British army officer commonly believed to have masterminded the idea of giving Native Americans smallpox blankets during the French and Indian War.

The college’s FAQ pages says it “is accurate to say that Lord Jeffery Amherst advocated biological warfare against Indians, but there is no evidence that any infected blankets were distributed at his command.”

JAC: This is the only demand that I think merits immediate consideration; why celebrate someone who even advocated genocide against Native Americans. But of course the much-admired Thomas Jefferson himself was a slaveholder. That doesn’t excuse Lord Jeffs, of course, but he was the man who gave his name to the College. This is the unofficial mascot: 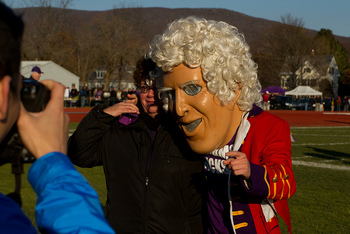 8.     Dean Epstein must ask faculty to excuse all students from all 5 College classes, work shifts, and assignments from November 12th, 2015 to November 13th, 2015 given their organization of and attendance at the Sit-In.

9.     Do not threaten the jobs of the faculty, staff, or administrators that support our list of demands. Such threats will result in an escalation of our response.

10.   The Office of Alumni and Parent Programs must send former students an email of current events on campus including a statement that Amherst College does not condone any racist or culturally insensitive reactions to this information.

11.   Dean Epstein must encourage faculty to provide a space for students to discuss this week’s events during class time.

Please acknowledge that all of these statements of apology are not the end all – that they are only a part of short-term healing and by no means achieve all of the goals we will set forth. We are in the process of finalizing long-term goals which we hope to collaborate on regularly with all members of the community.

By no means does this start/stop with the administration.

Almost nothing surprises me about American college students these days, but this seems a completely over-the-top list. And it makes me worry what will happen to these students when they’re forced to enter the real world after graduation.

Finally, in the interest of presenting opposing opinion, I’ll refer you to Ross Douthat’s column in today’s New York Times, “A crisis our universities deserve.” Douthat thinks that colleges, by their own actions, brought these protests on themselves.