My cat Velcro (named that because he used to stick his claws on me as a kitten) has a funny habit of sticking his paws in people’s water if they leave the table. This past Christmas, I walked away to take a call and my mom caught him in the act. So sneaky! But we wouldn’t always know if our water was … cat-aminated, if you will. Eventually we had to resort to putting coasters atop our glasses if we ventured away from our beverages.

Here’s a British ad for a spectacle company:

Finally, The Weather Channel reported how two Seattle girls, Kimberley and Rebecca Yeung (8 and 10 respectively), launched a weather-and-cat balloon, complete with GPS so they could find it. The balloon rose to the edge of space:

Made out of wood and broken arrow shafts, the craft rose to 78,000 feet with the help of a weather balloon filled with helium, reports GeekWire. Attached to the craft were two GoPro cameras, a flight computer and a photo of their cat, Loki, attached to a Lego R2-D2 figurine, thus inspiring the name: the Loki Lego Launcher.

While the craft was in the air, it recorded data for height, temperature, altitude and speed.

In a graph shared by the girls’ father, the data shows the balloon popped around 78,000 feet, where it reached its fastest speed of 110 km/h (about 68 mph). Through its journey, which lasted a little more than four hours, it maintained an average speed of about 35 km/h (approximately 22 mph).

The girls chose a launch site in central Washington to avoid the craft landing on anyone upon its descent. With the help of their GPS tracker, they were able to find it in the cow field full of tall grass it landed in.

Here’s the video; I love it! What a great project for the kids.

And here’s the photo of a photo of Loki attached to the device, way up in the air: 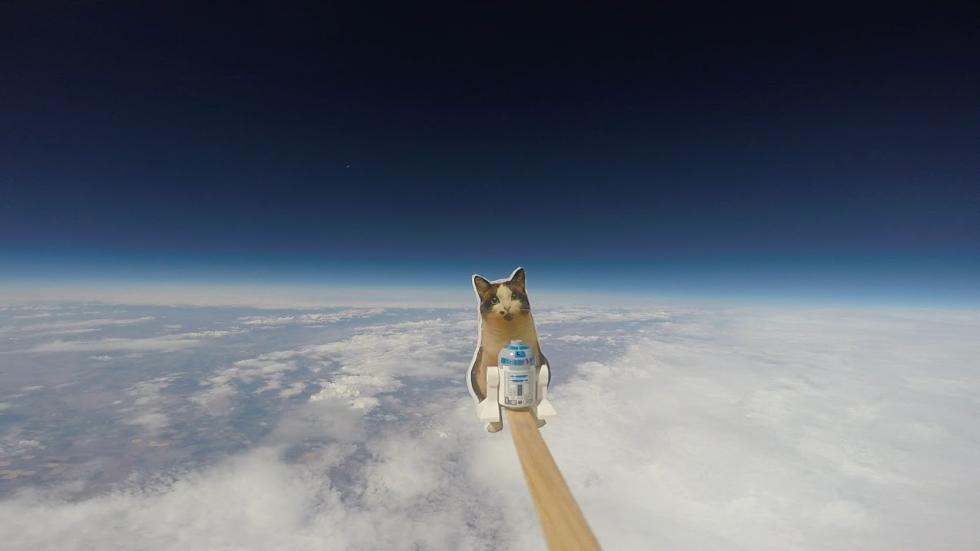