As I’ve mentioned before, Matthew Cobb, who writes often for this site, is a candidate for the Royal Society’s Winton Prize for science books. His book, Life’s Greatest Secret: The Story of the Race to Crack the Genetic Code, is one of six contenders (you can get a pdf of the first chapter for free at each book’s link), and the grand winner gets a big cheque for £25,000! (Matthew already got £2500 for being shortlisted, but of course for a scientist the honor is the recognition, not the dosh.) The shortlist:

The event will be hosted by Brian Cox, and will be livestreamed at either this site or this one beginning at 18:30 UK time and lasting an hour (the link will appear at about 18:00, when doors open). Matthew tells me that the winner will be announced around 19:30 UK time. And although he tells me that he’s already won in the sense of being nominated, I’m pulling for him to take the Big Prize itself. Matthew’s book is really very good, an intriguing detective story that happens to be true. As I said in my full blurb (condensed for the cover), and this is no exaggeration:

“Life’s Greatest Secret is the logical sequel to Jim Watson’s The Double Helix. While Watson and Crick deserve their plaudits for discovering the structure of DNA, that was only part of the story. Beginning to understand how that helix works—how its DNA code is turned into bodies and behaviors—took another 15 years of amazing work by an army of dedicated men and women. These are the unknown heroes of modern genetics, and their tale is the subject of Cobb’s fascinating book. Every now and again I had to stop reading because the amazement overload was too great.” 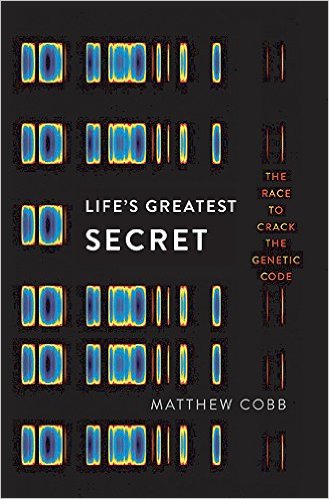