“Hominins” (formerly “hominids”), comprise all species, extinct and living (the latter is only H. sapiens), that fell on the side of the lineage that produced modern humans after the divergence of that lineage from the lineage leading to modern chimpanzees (our closest living relatives). Not all hominins fall in the genus Homo, of course: we have Australopithecus, Sahelanthropus, Paranthropus, and several other genera whose members went extinct without issue. Further, not all members of the genus Homo need have been our ancestors: several species might have lived—and probably did live— at the same time, as the chart below indicates. And some of these species probably went extinct without issue, and so aren’t our ancestors: 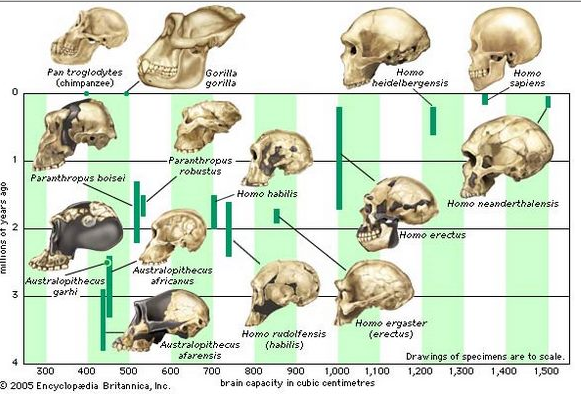 We are in fact not sure what earlier species evolved into Homo sapiens. Homo erectus, with a fairly big brain and widspread geographic distribution, might be a candidate, but we’re not even sure about that. Fossils are generally scarce, their characteristics overlap with fossils from other places, and we’re often unable to distinguish different species from simple variation among geographic localities within a single species—the brand of variation that is sometimes called “racial variation”.

This has led to a tendency to name every new fossil as a separate species (who wants to just describe yet another specimen of H. habilis?), which in turns leads to acrimonious debate about what species is what, and that then leads to the Big Debate about “what species was on the lineage leading to modern humans?”

Unfortunately, we can’t yet answer that last question, nor one closely connected with it: “When did we become human?” That question is nonsensical, I think, for it depends on exactly what you mean by “human”. If it involves purely physical traits, then we can at least in principle pinpoint such a time, though which traits you choose will themselves be arbitrary. If it’s mental traits or behavior, that’s even harder, for such things don’t fossilize. Sometimes, however, we might find instances of ritualized behavior, as in the burial of Neanderthal bodies and the anointing of skeletons with ochre. Did that make us human? Or was it speech, something notoriously difficult to discern from fossils? Or was it the complexity of cogitation or the development of the “intentional stance,” something almost impossible to discern from skeletons?

At any rate, a new species of hominin, H. naledi, has been described in a new paper (reference at bottom, free access) in eLife. It was written by Lee Berger et al. (the “et al.” are about 60 authors!), and describes a collection of 15 skeletons discovered together in a cave in South Africa. This is a remarkably complete collection of skeletons, and the gist of the paper is described at both the BBC and the New York Times. What I put below is distilled largely from these secondary sources, though I’ve had a look at the paper as well.

First, what’s notable is that there are so many skeletons, which—unlike many hominin fossils, found as partial skulls or other bones—allowed the authors to piece together a complete view of the species’ skeletal traits. Here are some of the remains in a photo by John Hawks from the BBC site: 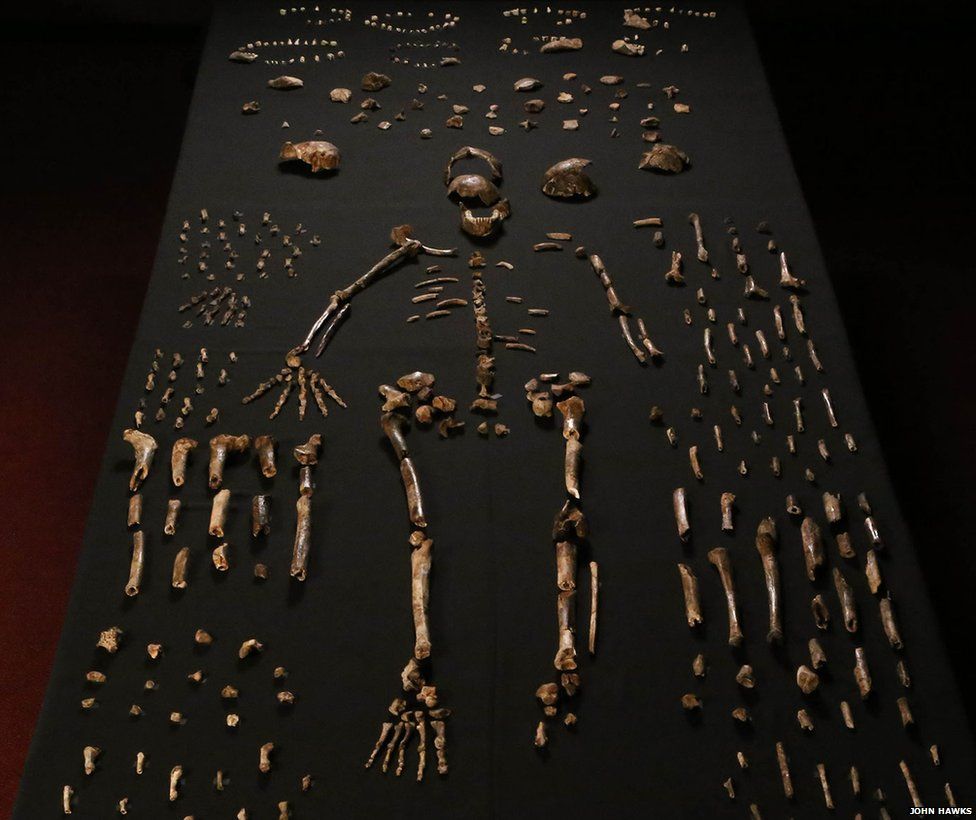 Now why is this considered a new species of hominin? Well, it’s a mosaic of primitive and advanced traits, as the paper itself says:

H. naledi presents yet a different combination of traits. This species combines a humanlike body size and stature with an australopith-sized brain; features of the shoulder and hand apparently well-suited for climbing with humanlike hand and wrist adaptations for manipulation; australopith-like hip mechanics with humanlike terrestrial adaptations of the foot and lower limb; small dentition with primitive dental proportions.

How old is this species? We don’t know. The cave can be dated, and could be as old as 3 million years, and the authors say likewise that these fossils could be three million years old, antedating the earliest described species of Homo—H. habilis—by nearly a million years. But that’s the age of the cave, not of the fossils. The fossils could be two million, one million, or even 500,000 years old. (H. floresiensis, the “hobbit,” which was about three feet tall with a tiny brain and totally non-modern skeleton, lived as recently as 12,000 years ago!)

Like australopithecines, H. naledi had a very small skull but a largely modern postcranial skeleton. Why isn’t it an australopithecine? Largely because its brain is bigger (by about 25%), its molars are very small (australopithecines had big molars) and there are skull characteristics that lump it with species like H. erectus. But many of the traits still fall within the range of australopithecines. Here are some additional drawings from the BBC showing “modern” traits mixed with primitive ones: 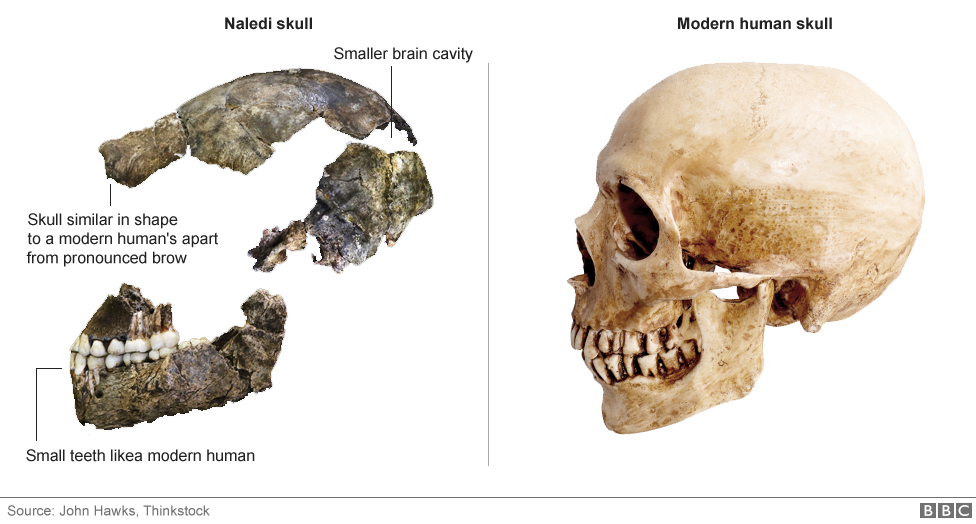 The curved fingers may imply that this species was partly arboreal, i.e., that it still climbed trees: 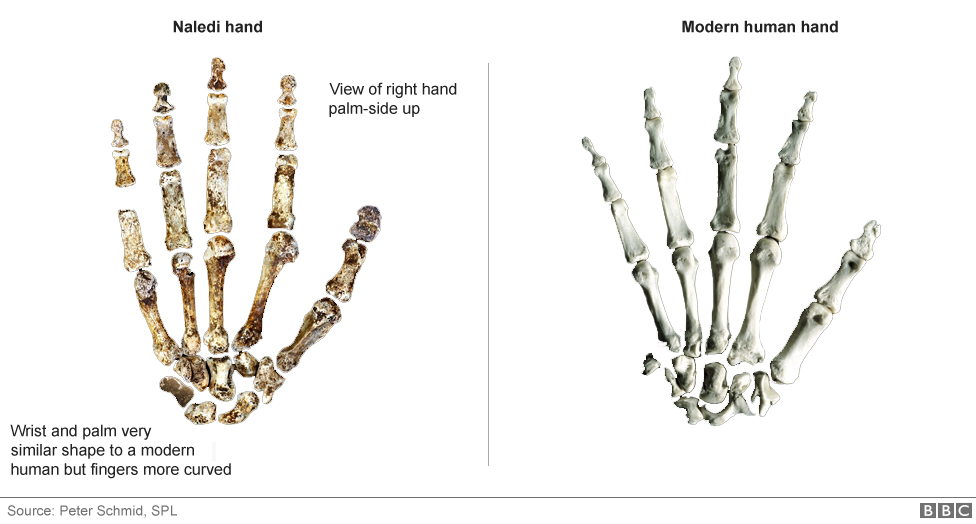 The shape of the foot suggests, though, that the species was at least largely bipedal, a modern trait. (Australopithecines were also bipedal, as we know from the Laetoli footprints). 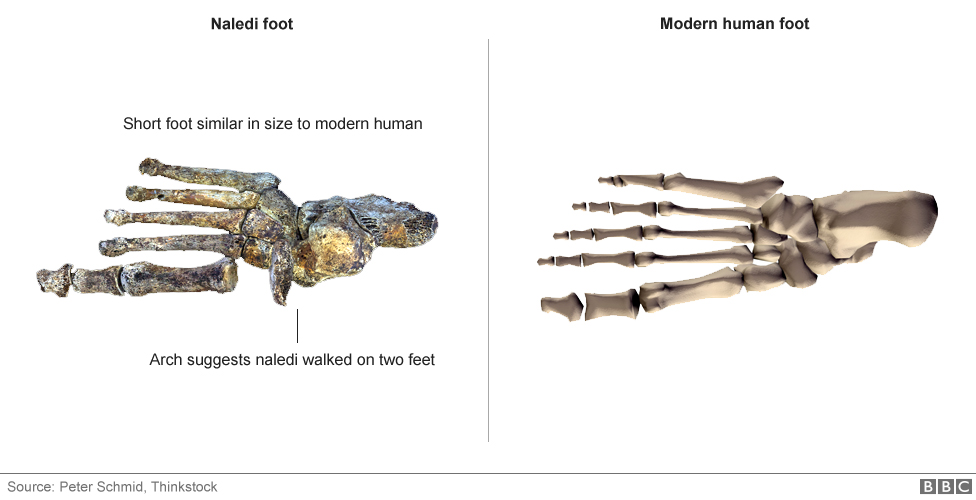 So let’s get to the three big questions. Two of them are answered erroneously in the title of the New York Times piece: “New species of human ancestor is found in a South African cave.” This is bad journalism on two counts: we have no idea whether H. naledi was on the lineage leading to H. sapiens. That means that we can’t say with any assurance that it was one of our ancestors. All we can say is that it was related to our ancestors.  Second, we don’t know for sure if it’s a new species, for that’s a judgment call. But let’s look in a bit more depth.

Is H. naledi a new species? Evolutionary biologists define a “species” as a group of individuals or populations separated from other such groups by reproductive isolating barriers that prevent them from successfully exchanging genes. Since we don’t know this from fossil hominins (though we do for Neanderthals vs. H. sapiens, which clearly did exchange genes and thus belong in the same species), we usually make such judgments solely on morphological grounds: does this species look different from other described hominin species? The authors’ judgment, based on the many skeletons and fragments they have, is that it does, and so they give it a new name.

That, however, doesn’t convince me fully, for the differences are small, and, as the authors note, many of the feature resemble those of H. habilis or early H. erectus.  That there may be diagnostic differences in some traits doesn’t convince me that this is a new species, for this could simply be a localized geographic variant—perhaps even a genetically related band—of a species already described. So I think it’s a bit premature to give it a new name. But I’m not particularly concerned about that. What’s more important is to get an accurate date for this fossil, for if it really is 3 million years old, that would certainly push back the origin of the genus Homo by a long period.

Is H. naledi our ancestor? As I said above, we don’t have the slightest idea. No journalist should state that this group is on the lineage leading to modern humans.

Did H. naledi practice ritual burial? This seems more likely, as all the skeletons are piled up together, though I don’t see any sign that there was any superstition involved in this practice. Perhaps they were sequestering the dead people away from others to avoid the stench. And even if they were putting the dead together (these dead involved hominins of all ages, by the way), this says little about the mentality of this species beyond the fact that they recognized the dead as different from the living. Again, it’s way premature to say that these things were “human,” as if they had a mentation or a spirituality resembling that of modern humans.  This statement by Lee Berger, then, which appeared in the BBC report, seems to me largely meaningless, for “what it is to be human” depends completely on what you mean by “human”:

Prof Berger believes that the discovery of a creature that has such a mix of modern and primitive features should make scientists rethink the definition of what it is to be human – so much so that he himself is reluctant to describe naledi as human.

I don’t even know if scientists have a consensus view of “what it is to be human”!

Now I don’t mean to be highly critical of the paper, as the description of the trove of skeletons is remarkable, and the analysis and description of differences from existing species is very good. I suppose what I’m criticizing here is largely the press coverage of this find, but also the willingness of the investigators to give this group a new species name when its age isn’t even known, and when it could simply be a geographical variant of an existing species—something that would be clearer if we had dates! And I am not an expert in human evolution, so I could be missing something, or have erred in my opinion. As usual, I’m willing to be corrected. But for the moment, caveat lector.

258 thoughts on “A new species of hominin hits the news. What is it and what does it mean?”