This tw**t popped up in my feed the other night, from “wildlife illustrator and invertebrate enthusiast” Richard Lewington [Richard has a website showing his art here]. Richard was running a moth trap in the night when he found this beauty:

If you look carefully, you can just see the male’s feathery antenna on the left; the female side presumably had a straighter antenna (these different shapes relate to the different functions – males have to detect female pheromones from far away; females primarily need to be able to detect food plants on which to lay their eggs). You can see this clearly in another example Richard tw**ted:

@SteveNash71 Trapped this Gypsy Moth in Bulgaria. Odd that it's mainly female, which rarely fly amongst 100s of males pic.twitter.com/9c2UH1DzWq

Gynandromorphs are mixtures of male and female, often occurring because of a developmental problem – we highlighted the potentially gynandromorph cardinal bird here three years ago. There is a link between birds and moths, in that both groups have an unusual form of sex determination. In mammals, females have identical sex chromosomes (XX) while males have one X and one Y chromosome – they can produce two kinds of gametes (X and Y sperm) and so are called the heterogametic sex. For reasons that are unclear, in birds and lepidoptera (moths and butterflies),  females are the heterogametic sex (to avoid confusion, their sex chromosomes are called Z and W; males in both groups are ZZ).

It seems probable that these moths are gynandromorphs because, at a very early stage of development – probably when a fertilised female ZW egg divided into two cells – one of the daughter cells ‘lost’ the W chromosome because of some glitch. The tissues that were produced by that cell were therefore ‘ZO’ – you need the W chromosome to be female, so the tissues became male. The sharp dividing line down the middle of the moths, and the ‘mirroring’ of sexually dimorphic external structures on either side reinforces this intepretration.

There are many examples of gynandromorph lepidoptera on Google, which is probably a combination of people’s interest in these insects and the striking sexual dimorphism that exists in many species, making it easier to spot:

Here’s a photo of a gynandromorph gypsy moth, clearly showing the different shaped antennae (the male side is on the right):

As Jerry pointed out in his original cardinal post, those of us who work on the fly Drosophila (which, like us, has XX females and XY males) would occasionally see gynandromorphs in our stocks, although unless you are doing some funky genetics with sex-linked eye- or body-colour, male and female flies are not as different as the examples of the moths seen above. However, I do recall finding an apparently female fly with a male foreleg (male forelegs have ‘sex combs’ that are involved in sexual behaviour). Jerry’s explanation bears repeating:

In flies the sex is determined by the ratio of X chromosome to autosomes.  Flies, like all diploid species, have two copies of every autosome. If you also have two X chromosomes, you’re a female because the ratio of autosomes to Xs is 1:1. If you have one X chromosome and one Y chromosome, your ratio is 2:1 and you’re male.  The Y doesn’t matter here: if you lose a Y chromosome, and hence are XO, you still look like a male, although you’re sterile (the Y carries genes for making sperm).

So to get gynandromorphs in flies, all that has to happen is that one X chromosome gets lost in one cell when the initial cell in a female (XX) zygotes divides in two.  One half of the fly then becomes XX, the other XO, and the fly is split neatly down the middle, looking like the one below.  But gynandromorphs don’t have to be “half and halfs”.  X chromosomes can get lost at almost any stage at development, so flies can be a quarter male, have irregular patches of maleness, have just a few male cells, or even a male patch as small as a single bristle.

Way back in the day (i.e., 1970s), making mosaic flies in which different patches of tissue are either male or female was the only tool we had for identifying which tissues were involved in controlling various behaviours. This was fastidious work pioneered by one of the greats of post-war science, the physicist-turned-molecular-geneticist-turned-behaviour-geneticist, Seymour Benzer. [JAC: see my mini-post at bottom in which I used these methods for another purpose.]

Along with Yoshiki Hotta, Benzer was able not only to show tissue-level genetic control of behaviour, but also to show where in the embryo those tissues were determined, thereby constructing what he called a fate map of the action of a particular mutation. They adapted this technique from one of the founders of genetics, Arthur Sturtevant, who originally proposed it in 1929.

Here are some figures from Hotta and Benzer’s 1972 paper in Nature: ‘Mapping of behavior in Drosophila mosaics’. The first shows the range of mosaics that they produced – they were much more varied than the naturally occurring gynandromorphs because of the way they manipulated a special kind of X-chromosome in these flies, called a ring-X chromosome (known as X-R). This X-R chromosome could be lost at varying times in development, changing tissues from female (XX-R) to male (XO). The later the chromosome was lost, the more specific the tissues that would be male. By using a body-colour mutation on the X-chromosome, Hotta and Benzer could track from the outside of the fly which tissues were male and female, because they had different colours.

The top left fly in the figure apparently lost its X-R chromosome at the earliest stage of development, hence the straight line. As you can see, the effect doesn’t need to be symmetrical – if the chromosome is lost at a later stage, then a very specific part of the fly could be affected, such as the right wing in the top right fly (the left wing is still female). 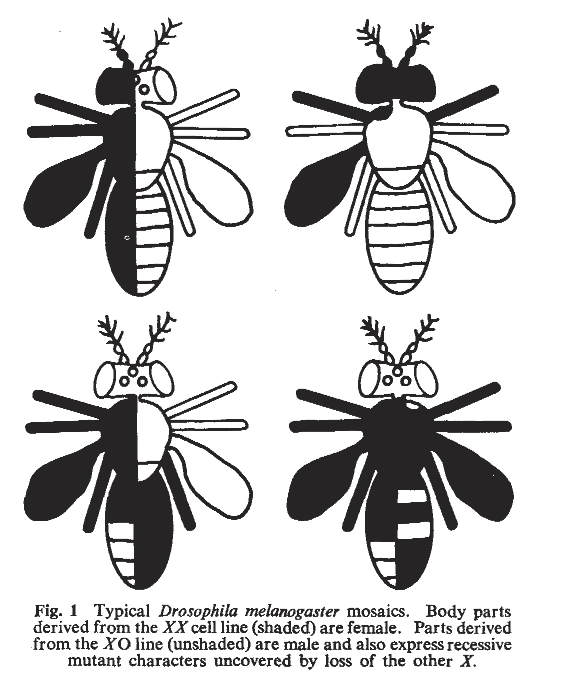 The second figure shows how they interpreted which parts of the fly embryo were involved in determining the behaviour of a mutation called hyperkinetic in which the fly shakes its legs when anaesthetised (this rather odd behaviour turned out to be of major importance, as it is produced by changes to the activity of ion channels in the fly’s neurons). Unsurprisingly, it appears that the hyperkinetic gene was exerting its influence in three separate regions (one for each of the fly’s pairs of legs), all of which are involved in producing the part of the fly’s nervous system that controls movement.

The arduous nature of the technique – it was not possible to predict which tissues would lose their X-R chromosome, and often no detectable change occurred – and the problems of identifying which tissues underneath the cuticle had changed sex, meant that it was not not widely adopted. By the late 1980s this method was  overtaken by direct manipulation of genes and the tissues they are expressed in, but for many years it was cutting edge science, available in only a few leading laboratories.

Jerry’s addendum: I used gynandromorphs, and Benzer and Hotta’s ring-X stock, to determine where in the fly the females’s sex pheromone (a waxy substance on her cuticule that incites the males to court her and mate with her) resided.  As Matthew noted, that stock of flies, which still exists, is prone to losing X chromosomes when they’re contributed by a male parent. The male’s XX (female) zygotes often lose the X at different stages of development, producing patches of tissue that are XO and therefore male. You can tell which patches are male because the female’s X carries a recessive gene causing yellow body color, so male bits (XO) are yellow and female bits (XX, with one gene for normal coloration) are normally pigmented.

XX females have very different sex pheromones from XY and XO males, so by correlating which bits of a gynandromorph fly were male vs. female, and then extracting each fly’s sex phreromones with hexane and testing the chemicals’ identities on a gas chromatograph, Ryan Oyama (an undergraduate student) and I were able to determine where in the fly’s body the sex pheromones were produced and/or sequestered. It turned out that this was in the cuticle of the abdomen only: flies with female heads, legs, or thoraxes but male abdomens produced only male pheromones. The amount of female pheromone was proportional to the amount of female tissue in the abdomen, at least as seen in the visible cuticle.

We published our results in the Proceedings of the National Academy of Sciences (reference and free download below), and I thought it was a very clever way to use old genetic technology to study behavior and biochemistry. Sadly, the paper didn’t get much notice!