Of course there’s a proximate reason, at least in our species, to the question above: “Why sex?” That answer is fatuous but true: “Because it feels good.” Of course it feels good—because pleasurable orgasms and the desire to copulate are the evolutionary cues prompting us to leave our genes via mating.

But why mate with another individual in the first place? Why not, as do many species, simply reproduce asexually, so that if you’re a female you simply produce offspring from eggs that have not undergone the process of meiosis (i.e., reducing the genome by eliminating one of each pair of chromosomes, a genome restored to fullness when it united with a sperm)? Lots of species can do this, at least occasionally, often by producing unfertilized but viable eggs that have a full chromosome complement.

You can show that there is in fact a significant evolutionary loss caused by having sex, and by undergoing the characteristic processes of sex: recombination (chromosomes swapping bits with the other chromosome of a pair) and segregation (members of different chromosome pairs randomly assorting themselves into eggs or sperm). The loss is in fact two-fold (it’s called “the cost of sex” or “the cost of having males”), so that, all things equal, an individual that can reproduce asexually leaves twice as many copies of its genes as an individual that has sex. In other words, a gene for eliminating sex, and reproducing asexually, should sweep through populations. According to evolutionary theory, every species should reproduce asexually!

But that’s not the case. The vast majority of non-microbial species on Earth reproduce sexually. Given the cost of doing so, there must be some tremendous evolutionary advantage to having sex, one that is strong enough to outweigh the big twofold cost of having sex.

Sadly, evolutionists don’t know what that advantage is, so the evolutionary explanation for the ubiquity of sex is a mystery. It’s one of the great Black Boxes of my field.

One explanation, which has some support, is that having sex enables you to produce more genetically diverse offspring: diversity that is a result of recombination and segregation in the parental genomes. If you have more diverse offspring, perhaps some of them would have the right genetic combinations to withstand infections or other environmental challenges. But if all your offspring are just like you, as in most asexual reproduction, then there’s no chance for diversity. If you can’t resist an infection, neither can your kids. This could select for genes that produce sexual reproduction, allowing some offspring to survive.

This is called the “Red Queen hypothesis” for the evolution of sex, stemming from a scene in Through the Looking Glass in which Alice and the Red Queen are running, but always stay in the same place. The name is appropriate because, if the hypothesis is true, organisms are always running to stay ahead of parasitic infections; but no matter how diverse their offspring are, there will always be new parasites (or newly mutated parasites) that come along, and so the pressure for maintaining sexuality remains.

One can show that, under certain conditions, this increase in the diversity of offspring can select for sexual reproduction—that is, the advantage of having recombination and segregation, and in uniting your egg or sperm with a gamete from another individual, can outweigh the twofold cost of sex. The evidence for this, which is not extensive but still accumulating, is that there is an correlation among populations of some species between infection rate and sexuality. In snails in New Zealand, for example, populations that are infected with a worm that can sterilize them often reproduce sexually, while uninfected populations tend to be asexual. There’s other evidence as well, but it’s of this correlational type.

Now, however, a new paper in Science by Nadia Singh et al. (reference and free download below), suggests that one can see an advantage of one aspect of sex—recombination between members of chromosome pairs—as a response of single individuals within their lifetimes. Using fruit flies, they showed via a series of clever experiments that infected Drosophila produce a higher proportion of recombinant offspring than do uninfected individuals. This suggests not only that parasites might be a factor that selected for sexuality in their hosts, but that hosts can somehow “sense” that they’re infected, and produce more genetically diverse offspring. Having such an evolved “sensing” mechanism would of course be adaptive, allowing you to produce more diverse offspring—for if you’re infected, your offspring are likely to be as well.

Here are two individuals of Drosophila melanogaster, the study organism, having sex. The male, with the black abdomen, is to the right: 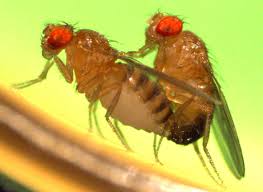 What Singh et al. used is an age-old technique in Drosophila: measuring crossing over (recombination) between members of a single chromosome pair (in their case, chromosome 2). This is in fact the way Alfred Sturtevant showed, back at the turn of the 20th century, that genes were lined up on chromosomes in a given order. He was a true genius, and here he is about the time he did that experiment (note the label, which I recall Sturtevant wrote himself): 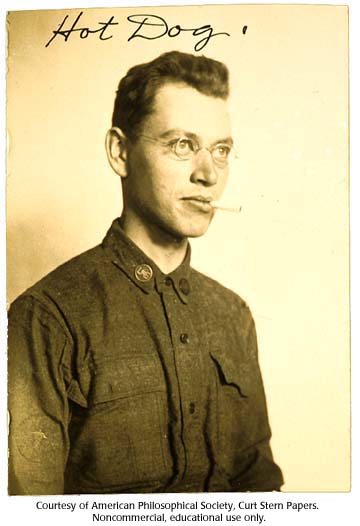 In the case of Singh et al., the researchers measured crossing over between ebony and rough, two genes on the second chromosome that cross over about 20% of the time.  What they did is make females that had the mutant genes (affecting body color and eye texture respectively) on one chromosome, and the two “wild type” non-mutant genes on the other. Since ebony and rough are recessive forms of the genes, these doubly heterozygous females  have a normal appearance.  However, when you cross them to males homozygous for ebony and rough, you can measure the amount of recombination by the proportion of offspring showing only a single mutant trait (circled in the diagram below, which is from the paper). Normally we see about 20% of these offspring—the further genes are apart on the chromosome, the more crossing over between them will occur, and the more recombinants you see. 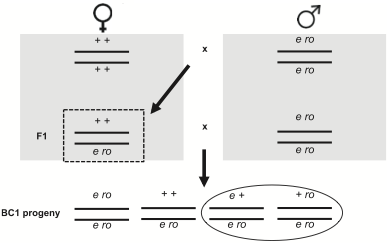 It turns out that when the doubly heterozygous females (within dashed box to left above) are infected with the bacteria Serratia marcescens, they produce, when crossed to ebony rough males, significantly more recombinant offspring than do either noninfected or mock-infected females (i.e., those pricked with the injection needle, but with no bacteria injected).

Clearly, infection increased the degree of recombination—one aspect of sexual reproduction—although the p value, showing how likely these results could have been simply a random fluctuation and there was no real effect, was a bit higher than I like. It was 0.03, meaning that even if there was no effect of infection on recombination, the experimenters would observe an effect this large in one of 30 trials. The “cutoff level” is 0.05, so biologists consider p values below that to be “significant”. So these results were marginally significant, explaining why the paper was published in Science, but I’d like to see more experiments, particularly ones showing that the increase in recombination is genome-wide rather than affecting part of one chromosome.

It’s possible that, for reasons we don’t understand, infection simply causes breaks on chromosomes, or on the second chromosome in particular. One could test that as well by seeing if infection by other organisms, like tiny worms, would also have the same effect. Another experiment using injection of heat-killed bacteria showed no effect, so live bacteria are required to initiate the production of more-diverse progeny. More important, an experiment with wasps (see below) gave a similar result.

There are two other explanations  for the increase in the proportion of single-mutant offspring. One is mitotic recombination: that crossing over might occur not during sperm and egg formation (at the time when “sister chromosomes” pair up), but beforehand. Alternatively, there might be transmission distortion, so that there is no increase in the amount of crossing-over, but that the recombinant chromosomes somehow get preferentially sorted into the eggs, making it look as if there was an increase in crossing over. In all cases this could still represent an adaptive evolutionary response, for all three mechanisms yield a higher proportion of more diverse offspring. What we’re talking about here is simply the mechanism of getting more diverse offspring.

I won’t go into details, but you can test these alternative mechanisms by taking advantage of two features of Drosophila: males show no crossing over during sperm formation (we have no idea why this is!), and because all “normal” recombination occurs 4-5 days before fertilized eggs are laid. Ergo, if the appearance of recombinant offspring increases after this, it must be transmission distortion. It turns out that the increase in the number of recombinant offspring does indeed appear due to transmission distortion: recombinant chromosomes are preferentially put into the eggs. We have no idea how this is done.

Finally, the authors did one more experiment, injecting Drosophila larvae with parasitic wasps rather than bacteria (these wasps are a normal predator on fly larvae in nature). And, as with the bacteria, the female larvae that successfully fought off the wasp infections grew up (after pupating) to produce a higher proportion of recombinant offspring than control, uninfected larvae. Below is the figure showing the difference, which was even more significant (p = 0.0002) than with the bacteria. The proportion of recombinant progeny is on the left scale, and it’s lower in control than infected wasps:

The curious thing here is that these are larvae that are infected, and larvae haven’t yet developed the cells that produce eggs. Somehow the effect of being infected carries over from the larval to the adult stage.

This result, then, adds to the growing pile of data suggesting that, at least in some cases, the evolution of sex is connected with resistance to infectious agents—i.e., that sex is an adaptive response that wards off infections by producing so many diverse progeny that some of them will have combinations of genes that resist infection. Or, to say it yet another way, genes for sexual reproduction are advantageous because they happen to be present in those individuals that have other genes allowing them to better survive infections. Sex genes “hitchhike” on infection-resisting genes.

The paper of Singh et al., however, extends previous work because it shows that an adaptive response can evolve not just over generations, but can be a plastic one: that recombination can be increased during one’s lifetime when an infection is detected. (That response, of course, if it’s truly adaptive and not just an epiphenomenon, must also have evolved over generations.)

Is infection, then, a general selective force that produced sexuality in most species?

Here are some questions I have that would extend this paper, which—make no mistake about it—is very good.

One thing I should add at the end is that we’ve long known that artificial selection for increased recombination is highly successful in Drosophila. You can, for instance, take the kind of females shown above, and choose for further breeding the ones that produce a higher proportion of recombinant offspring. Over generations, this can lead to a pretty strong increase in recombination (you can also select for decreases). Further, you can also select for increased recombination between a specific pair of genes on a single chromosome, leaving the rest of the genome with no change. Clearly there are genes around with variants that can change the rate of recombination, which of course is a prerequisite if that aspect of sexuality evolved as an adaptation.

88 thoughts on “Why sex? Experiments on fruit flies suggest it evolved to resist infection”