As most of you know, Oliver Sacks is in the process of dying. His metastatic cancer began in his eye, and then spread to his liver and now to other places. He doesn’t have long to live, and has documented his decline, and his thoughts on impending mortality, in three pieces in the New York Times. I posted on the first one in February, and another,called “”My periodic table,” appeared in February. In that one he matched the latter years of his life with the corresponding number of a chemical element in the periodic table. An excerpt:

I started a new sort of treatment — immunotherapy — last week. It is not without its hazards, but I hope it will give me a few more good months. But before beginning this, I wanted to have a little fun: a trip to North Carolina to see the wonderful lemur research center at Duke University. Lemurs are close to the ancestral stock from which all primates arose, and I am happy to think that one of my own ancestors, 50 million years ago, was a little tree-dwelling creature not so dissimilar to the lemurs of today. I love their leaping vitality, their inquisitive nature. [JAC: My colleague Anne Yoder is director of that Center and showed him around. Her post on the Duke Lemur Center Facebook page says this: “It was such an amazing 24 hours. He is every bit as kind, generous, and full of wonder as you could imagine.”]

. . . Bismuth is element 83. I do not think I will see my 83rd birthday, but I feel there is something hopeful, something encouraging, about having “83” around. Moreover, I have a soft spot for bismuth, a modest gray metal, often unregarded, ignored, even by metal lovers. My feeling as a doctor for the mistreated or marginalized extends into the inorganic world and finds a parallel in my feeling for bismuth.

I almost certainly will not see my polonium (84th) birthday, nor would I want any polonium around, with its intense, murderous radioactivity. But then, at the other end of my table — my periodic table — I have a beautifully machined piece of beryllium (element 4) to remind me of my childhood, and of how long ago my soon-to-end life began.

Today’s Times has a further installment, “Sabbath,” which shows how Sacks, and some other secular Jews, still hang onto old religious rituals. (He’s an atheist.) I don’t adhere at all to religious ritual—although I used to have a mezuzah on my lintel—but it’s fascinating to see what one one clings to at the end of life. I briefly thought that Sacks was being solipsistic, parading his illness before the public, but I instantly realized that he’s doing exactly what Hitchens was doing at the end of his life: these men are writers, and their first response to nearly everything is to put it into words for others. Perhaps that helps bring coherence to their thoughts, or even provides some solace, but what it certainly does do is give us unique insights about what it’s like to die. It’s sad, and it’s wrenching, but, as Bonnie Raitt said, it’s what we all go through.

An excerpt from “Sabbath”:

In December 2014, I completed my memoir, “On the Move,” and gave the manuscript to my publisher, not dreaming that days later I would learn I had metastatic cancer, coming from the melanoma I had in my eye nine years earlier. I am glad I was able to complete my memoir without knowing this, and that I had been able, for the first time in my life, to make a full and frank declaration of my sexuality, facing the world openly, with no more guilty secrets locked up inside me.

In February, I felt I had to be equally open about my cancer — and facing death. I was, in fact, in the hospital when my essay on this, “My Own Life,” was published in this newspaper. In July I wrote another piece for the paper, “My Periodic Table,” in which the physical cosmos, and the elements I loved, took on lives of their own.

And now, weak, short of breath, my once-firm muscles melted away by cancer, I find my thoughts, increasingly, not on the supernatural or spiritual, but on what is meant by living a good and worthwhile life — achieving a sense of peace within oneself. I find my thoughts drifting to the Sabbath, the day of rest, the seventh day of the week, and perhaps the seventh day of one’s life as well, when one can feel that one’s work is done, and one may, in good conscience, rest.

That’s so sad, and so eloquent. Goodbye, Oliver. You made the world a better place—by helping others who were troubled and by giving us glimpses into not only their minds, but yours. 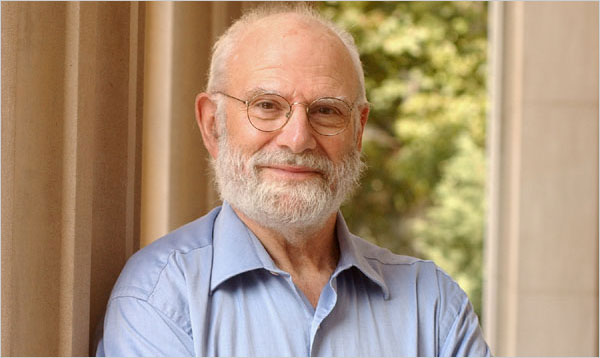 29 thoughts on “Oliver Sacks on the Sabbath—and his death”