This book, which came out in March, may be useful for secular parents. It’s by author and journalist Wendy Thomas Russell, and called  Relax, It’s Just God: How and Why to Talk To Your KidsWhen You’re Not Religious. If you click on the secreenshot below, you’ll go to an interview on PBS between Russell and Jeffrey Brown: 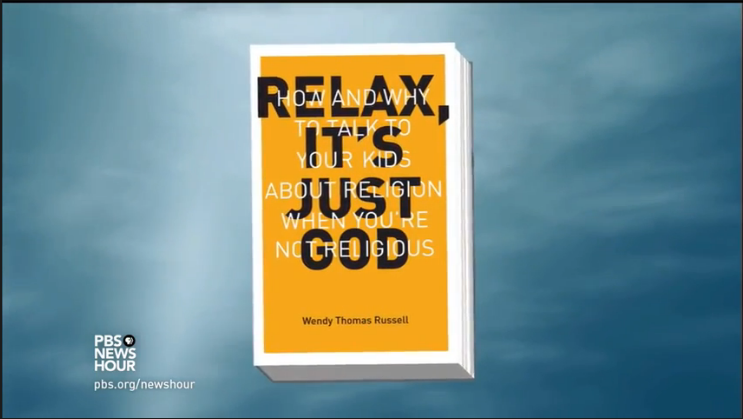 Thomas’s description sounds reasonable, but also a tad accommodationist, and I am a torn about the interview. On one hand, I don’t think kids should be indoctrinated with any belief, whether that be atheism or religion. Russell does seem to agree, urging parents to explain to their kids what different people believe in a neutral way.

On the other hand, she doesn’t discuss, at least here, any evidential basis behind those disparate beliefs. She says, correctly, that what people actually do matters more than what they believe, but she also emphasizes teaching kids critical thinking. That, then, neglects both emphasizing critical thinking in assessing different worldviews, as well as the role of religion in conditioning people’s behavior: “Mommy, why do so many people hate gays?”

Has anybody read this? Curiously, the book ranks pretty high on Amazon, both in terms of ranking and customer reviews, but there are extraordinarily few of the latter.

47 thoughts on “A new book for secular parents: how to tell your kids about God and religion”