Since I started this website, I’ve written many posts on epigenetics, a term that now refers to modification of the nucleotide base composition of DNA by the environment or by other genes. Such modification—usually involving attachment of methyl groups to two of the four bases that make up DNA—may have significant effects on the organism, ranging from changed behavior to changed appearance. But “epigenetics” has been taken up by the “Darwin-was-wrong” crowd as a way to claim that environmentally induced epigenetic modifications of the DNA can be inherited in a stable fashion over generations and even produce adaptations—a decidedly non-Darwinian mode of evolution called “Lamarckian inheritance.”

You can read my previous posts, grouped under the link above, for my skeptical views on this alternative route to the evolution of adaptations. There’s no doubt that epigenetic modification of DNA can be produced by “instructions” from other parts of the DNA, and that those genetically-based modifications can be adaptive. They can, for instance, explain why the genes from mothers versus fathers act antagonistically in the fetus, as paternal DNA is “imprinted” (methylated) differently from maternal DNA, and fathers have different reproductive interests from mothers. But this sort of epigenetic modification ultimately rests on genetic adaptation: the “instructions” coded in parental genomes. It is not something induced purely by the environment.

As for purely environmental modification of DNA, that can on occasion affect the organism, but almost never persists beyond one or two generations (the methyl groups disappear during sperm and egg formation), and to my knowledge is not responsible for a single permanent adaptation seen in nature. When the genetic basis of adaptations like spiny fins, cryptic coloration in mice, or beak width in finches is studied, it invariably rests not on environmentally-aquired epigenetic modifications, but on base-pair changes in DNA—that is, on the conventional neo-Darwinian paradigm of “random” mutations in the DNA that change its sequence, with those changes enhancing reproduction being the ones that persist. In other words, virtually every adaptation ever studied is based on conventional mutations and natural selection, not environmentally induced changes of the DNA that persist for generation after generation. What persists are the claims of would-be Kuhnians who see epigenetics as a highly significant route to adaptive evolution—one that violates conventional wisdom.

I was pleased to see that science journalist, former research geneticist, and woo-critic Adam Rutherford made these points, and others, in an article in the July 19 Guardian science section called “Beware the pseudo gene genies.” You can read it for yourself, but I’ll present a brief excerpt so you can see why it aroused the ire of Deepak Chopra. Chopra, along with his coauthor Rudy Tanzi, have recently incorporated epigenetics into their litany of woo-terms, arguing that many human behaviors can epigenetically change our DNA, and so we can do things that will help us by changing our genome. (See my critique of their specious claims here.)

Lots of real scientific terms – such as “neuro” or “nano” – get borrowed for a spot of buzzword scienceyness. Epigenetics is a real and important part of biology, but due to predictable quackery, it is threatening to become the new quantum.

. . . Some limited, rare epigenetic tags can be passed down from parent to child. We’ve seen a handful of these in mice, even fewer in humans. [JAC: as far as  I know, none of these “tags” have persisted longer than three generations.]

. . . These results are complex, perplexing, but possibly slight, and demand greater examination. Science is unfortunately prone to fashion, and many scientists are intrigued but anxious that the scrutiny being applied to these studies is not robust enough to justify the fanfare.

If the changes are permanent, then we’ve got big news. But given that in mice they have at best only lasted a few generations, the effects are intriguing but not revolutionary. Creationists cite epigenetics to assert that Darwin was wrong, and that epigenetics may show Lamarckian evolution – that is, acquired during life. It doesn’t, as the changes do not alter the DNA sequence on which natural selection acts. Even if one day we did show that epigenetic tags were permanently heritable, it would still only be a drop in the evolutionary ocean. Show me one robust example, and I’ll show you a billion that are straight-up Darwinian.

Then Deepak takes a licking, but, as you’ll see, he keeps on ticking:

New age gurus such as Deepak Chopra cite epigenetics as a way of changing your life, under the false supposition that genes are destiny, and epigenetic changes brought on by lifestyle choices such as meditation “allows us almost unlimited influence on our fate”. Well, no: that sandwich you just ate has changed the expression of your genes too. Even the few inherited epigenetic changes we observe are not very predictable, let alone predictably positive. The Överkalix grandsons lived longer if their grandfathers lived through famine. But the granddaughters of women who had survived fallow seasons had lower life expectancy. Conclusion? Much more work needed.

Rutherford reached his conclusions about epigenetics independently of mine, but they’re identical, and I’m pleased that such a sound and skeptical thinker is on the sam page as I. He continues:

Epigenetics is fascinating but still in its infancy. It’s not heretical, it won’t upend Darwin, or give you supernatural powers, but it is a necessary pursuit in our never-ending quest to unpick the inscrutableness of being. More, unhyped, work is needed, and mystical thinking is never welcome round these here parts.

And then the Twi**terstorm began, with Rudy Tanzi, Chopra’s co-author, initiating the fracas. I’m grateful to Matthew Cobb for tracking down the tweets, and he now informs me that they’ve all been collated by Jo Brodie at a Storify site called “Adam v. Deepak: 4-5 August 2015.” Have a look—it’s a hoot! Here’s just a few: 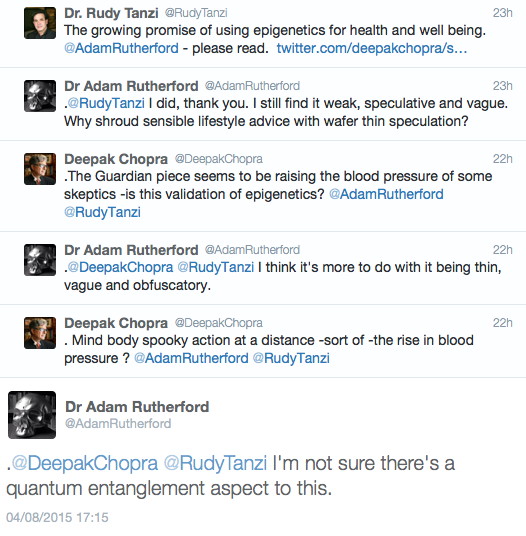 The credential-mongering begins, with Chopra implying that Rutherford (who has a Ph.D. in genetics, for crying out loud) is not as qualified as a “real scientist” like “Harvard Prof” Tanzi: 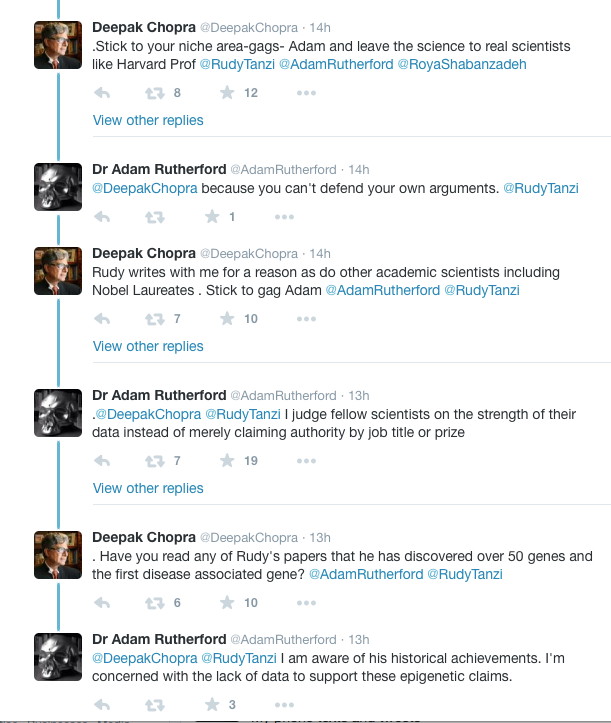 It went on and on, with Chopra getting increasingly peeved and, as usual, dropping his mask of calmness to show the petulant prima donna beneath. Chopra really is a nasty piece of work. 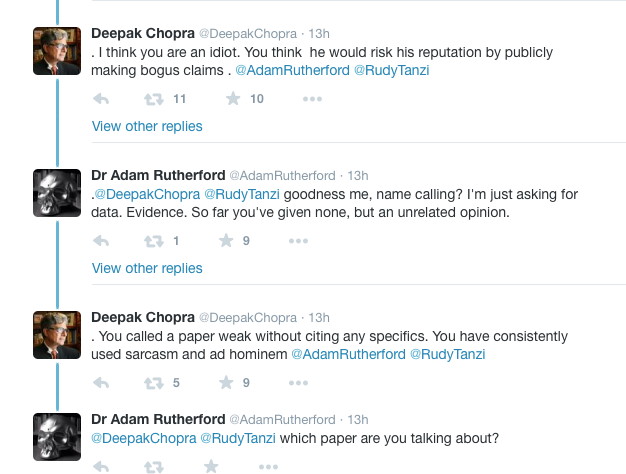 Brian Cox pitched in, with some advice from Yoda:

See the rest at the Storify link.