As I’ve mentioned several times, one of the reasons I went through Austin was to get measured for a pair of custom cowboy boots by Lee Miller, in my view the finest bootmaker in the U.S. His shop is called “Texas Traditions,” and Matt Dillahunty accompanied me there a few days ago for my Big Measurement.

I’d waited five years to get to the top of the list (with a huge backlog, Lee doesn’t take new orders), and so I was quite excited. Matt is a boot lover himself, and wanted to tag along to see the process (he now has a jones for a specific kind of custom boot, but I won’t spill the beans).

I first visited the shop, just to see the operation, in March 2010, and now, five years and four months later, I got to finally order the boots (I was snuck onto the closed waiting list because I sent Lee a copy of WEIT, which he liked). Go here to see my post written after my first visit.

It took Lee about forty minutes to measure my feet. He is obsessive about getting a good fit, and does everything he can to ensure that. I sat on a thronelike chair for the measurements (pictures are by Matt): 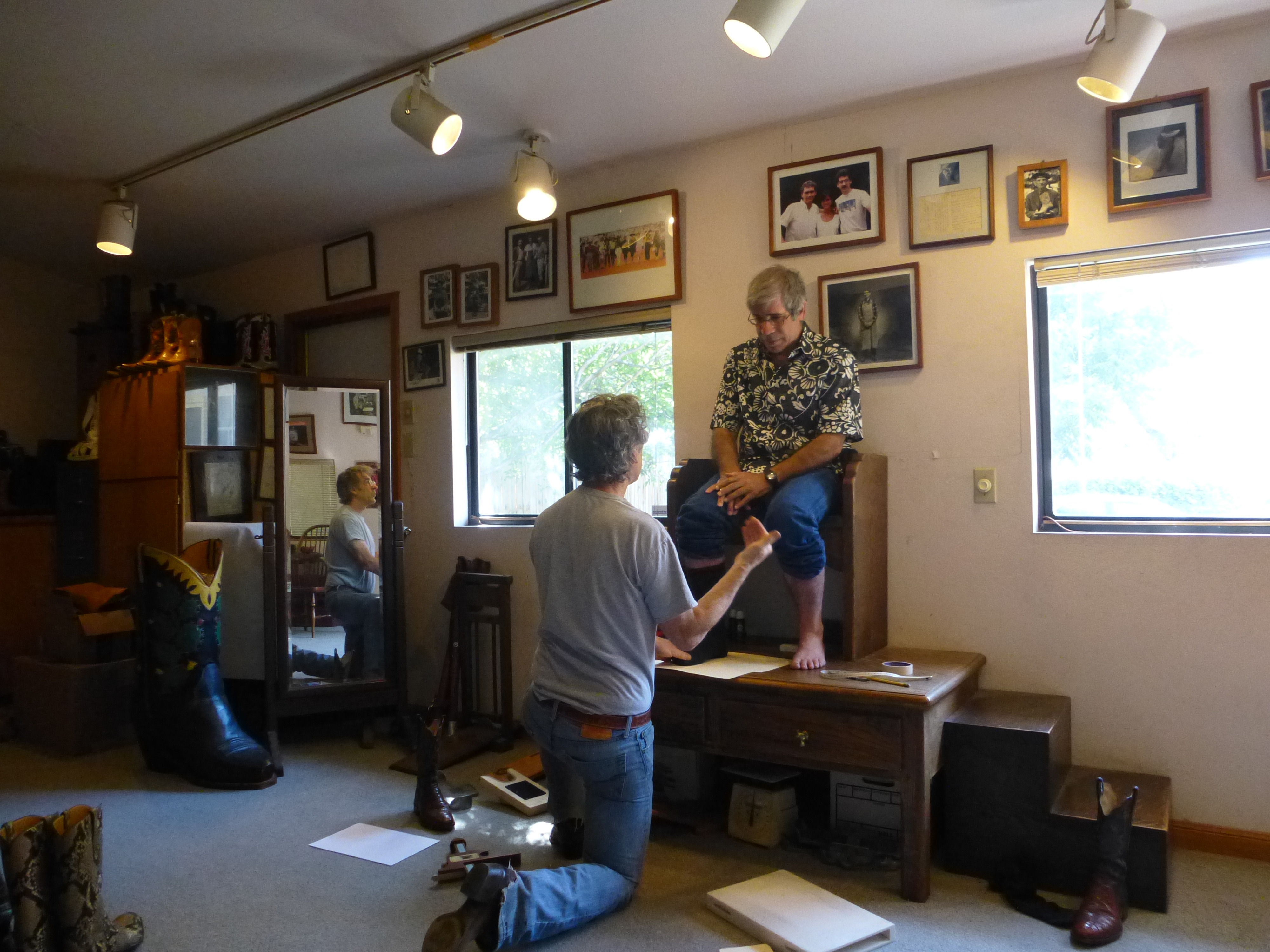 After taking a few simple measurements with those metal slidey-scales you’ll remember from shoe stores if you’re of a certain age. Lee then gets down to business. Tape measures are applied all over the foot and calf, and then he makes you wear a sock of normal thickness, puts a piece of masking tape on each foot, and then measures around the foot at about six marks made along the tape, which he then puts in a file folder. 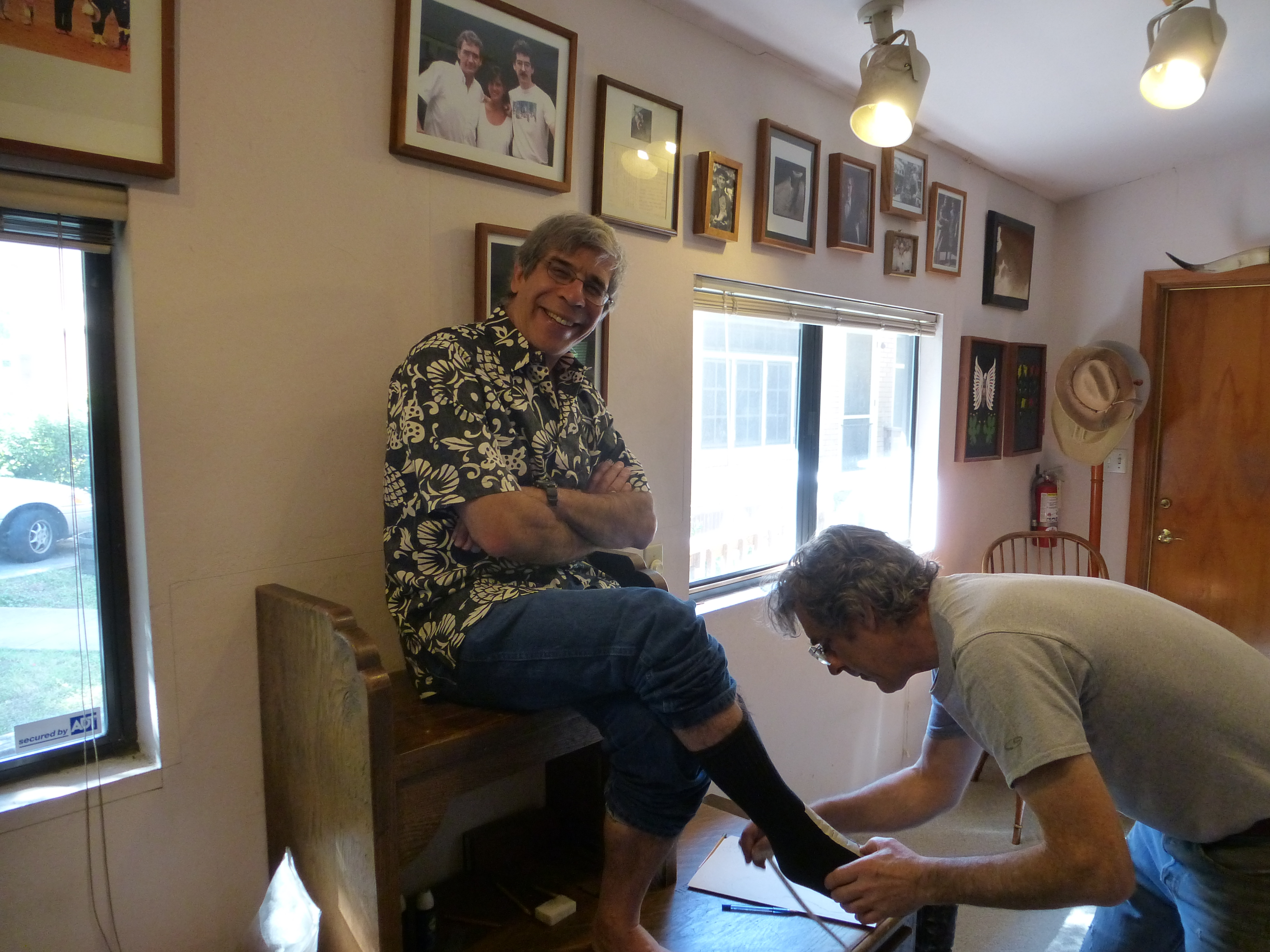 He then applies a metal comb with moveable teeth to the top of the foot so you get the contour of each foot (essential for a good fit): 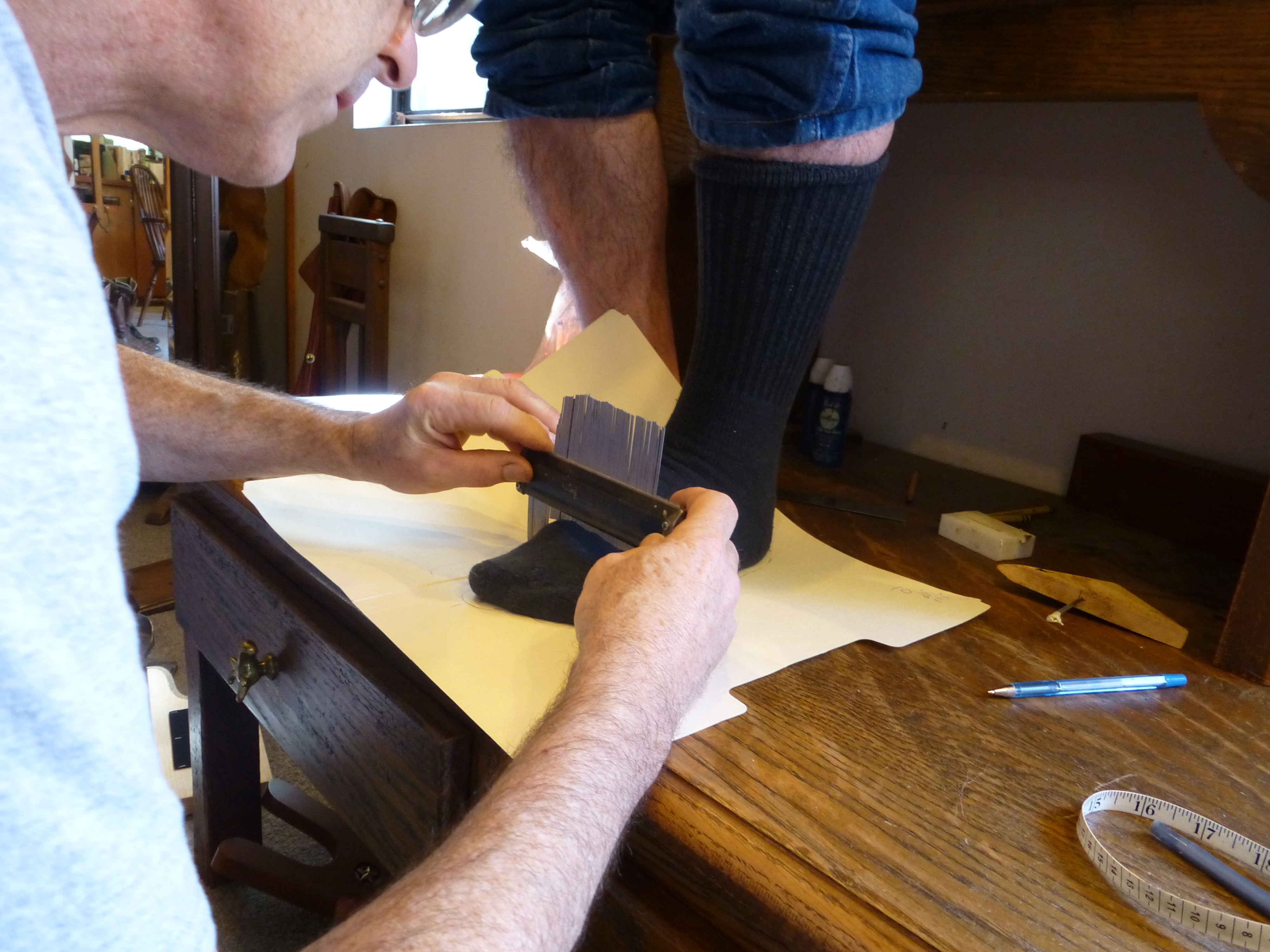 Here’s the upper contour of my left foot: 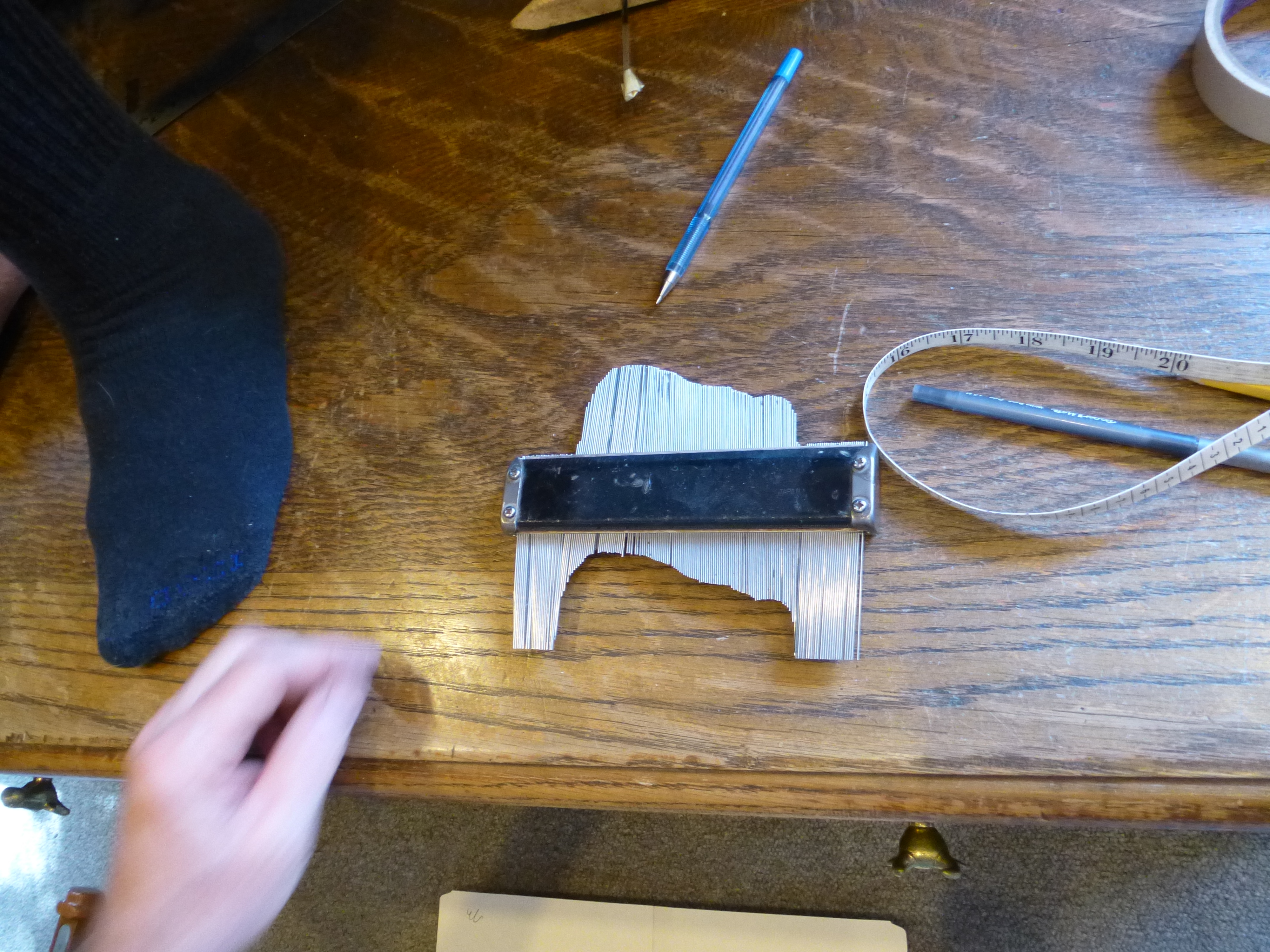 I was then asked to stand on a big inkpad in my socks and then make an impression on a piece of paper. That gives the bootmaker an idea of how your weight is distributed.

After the long period of measurement, Lee gets a bunch of data (below) that he needs to make the last: a wooden or fiberglass three-dimensional model of the foot that is used as the substrate to build the boot around.

Matt asked if making a last couldn’t somehow be done by 3-D computer printing, and Lee responded that we’re not quite there yet, for he has to adjust the dimensions of the last based on subtle aspects of his boot-making experience. Here are my foot data, including the tracings from the “comb”: 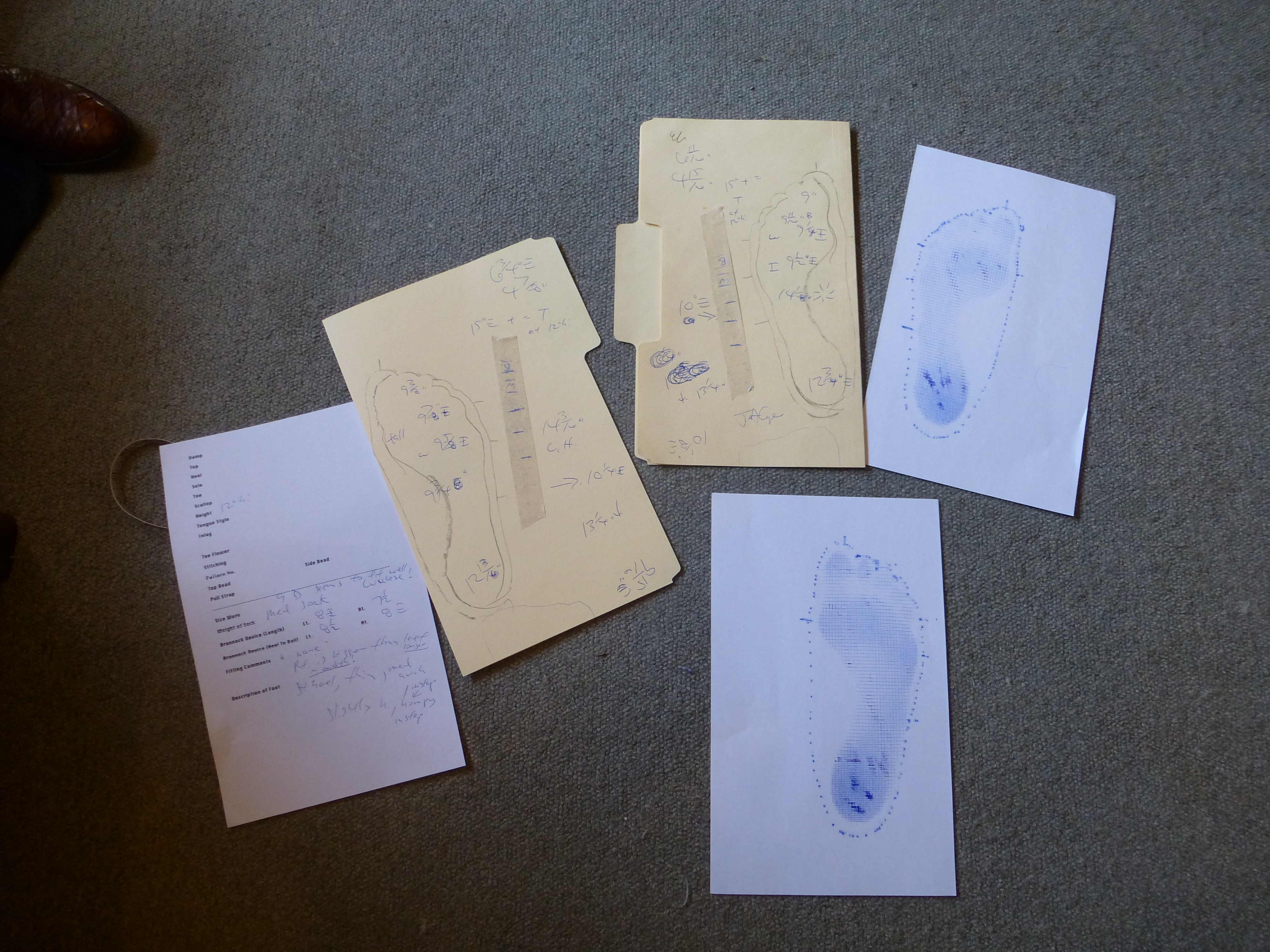 Here are some lasts of some of Lee’s customers(note the names). Once you have a last made, you don’t need to be measured further, but can order boots at long distance—unless your foot has somehow changed. 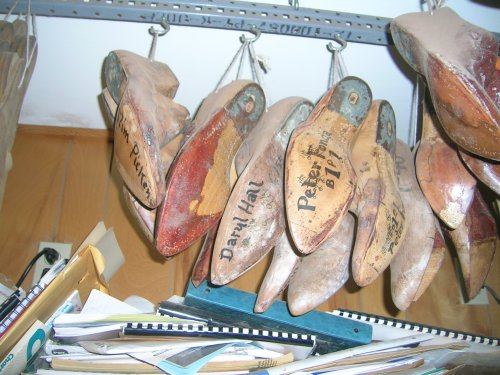 Picking the design, leathers, toe shape, stitching, and everything else consumed nearly two more hours with the help of Carrlyn, Lee’s wife, who runs the shop and does a lot of the designing. We decided on kangaroo hide, which is very tough and (unlike calf) doesn’t crack. I chose a cognac color for the footpiece (the vamp) and a dark, forest-green color for the shaft: 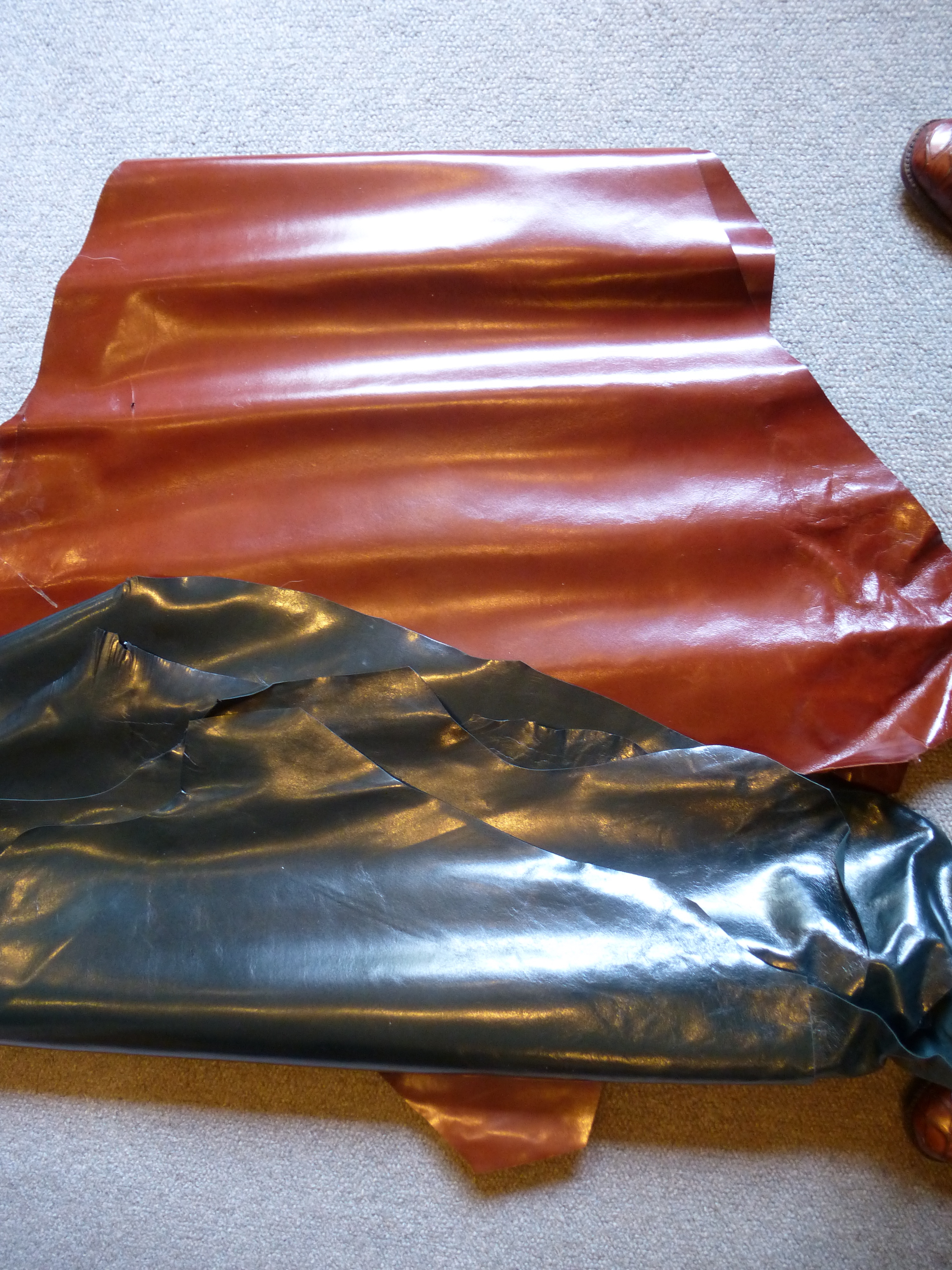 I won’t reveal my design until I get the boots in four or five months, but one hint: they incorporate a feature of Charlie Dunn’s personal boots, shown in this earlier post.

While choosing the leather, I once again saw Lauren Bacall’s personal boots (she was taken to the shop by Lyle Lovett, a steady customer who was starring in a Robert Altman movie with Bacall). These boots were returned because they didn’t fit well: she was said to have hard-to-measure feet. Lee simply kept the returned boots and made her a pair that fit, for no additional charge. He’d do that for any customer whose boots didn’t fit. Note her initials on the inside of the pulls. They have the classic Texas bluebell design in inlays. 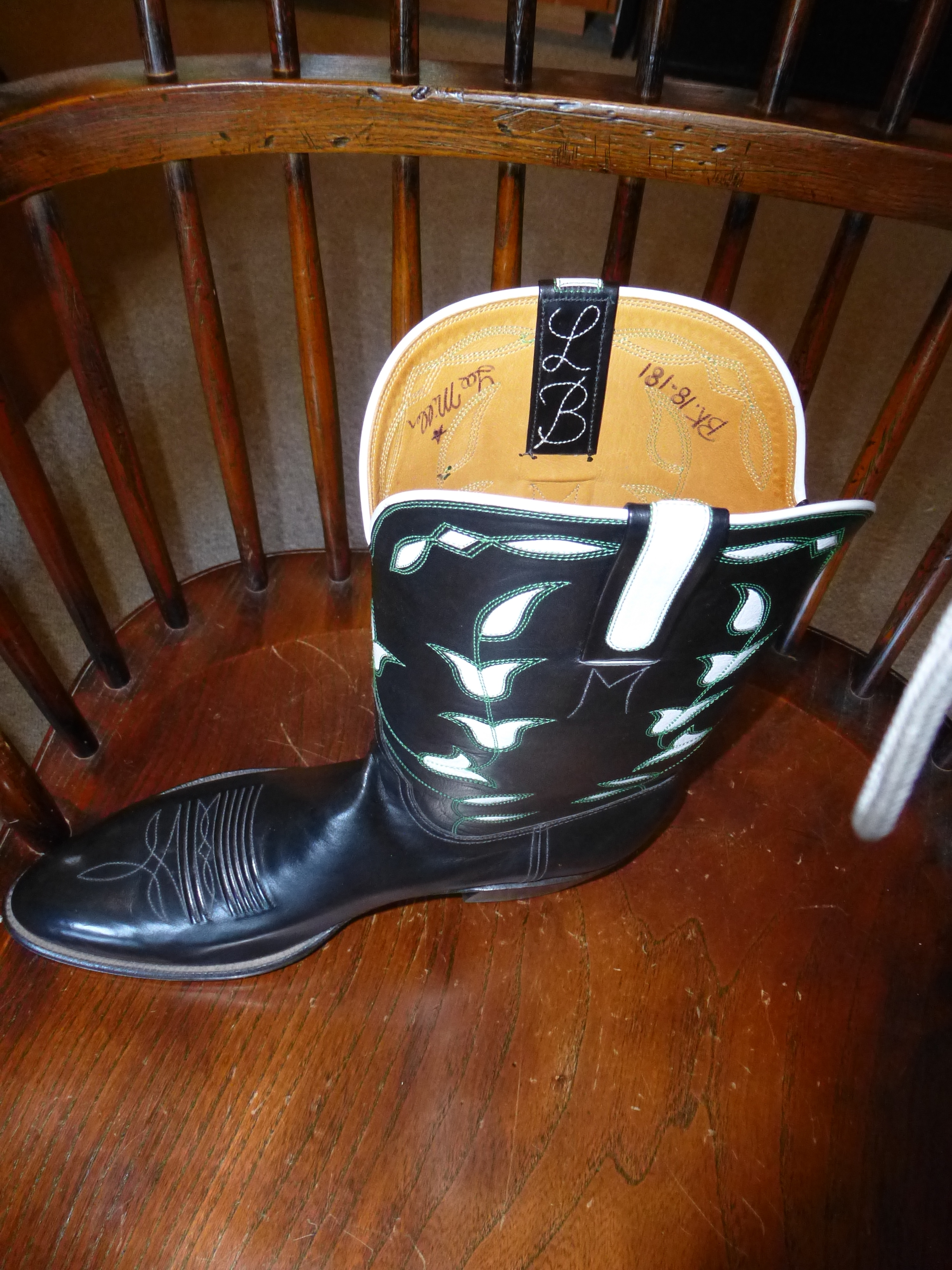 I took a photo of Lee and Carrlyn (pronounced “Car-Lin”) in the workshop. They’re delightful people; a pure pleasure to work with. Lee is wearing pigskin boots (very tough) that he made for himself. Carrlyn owns one pair of boots: a black alligator pair with a design similar to the one I chose (she’s not wearing them in this photo). Note the lasts hanging everywhere. 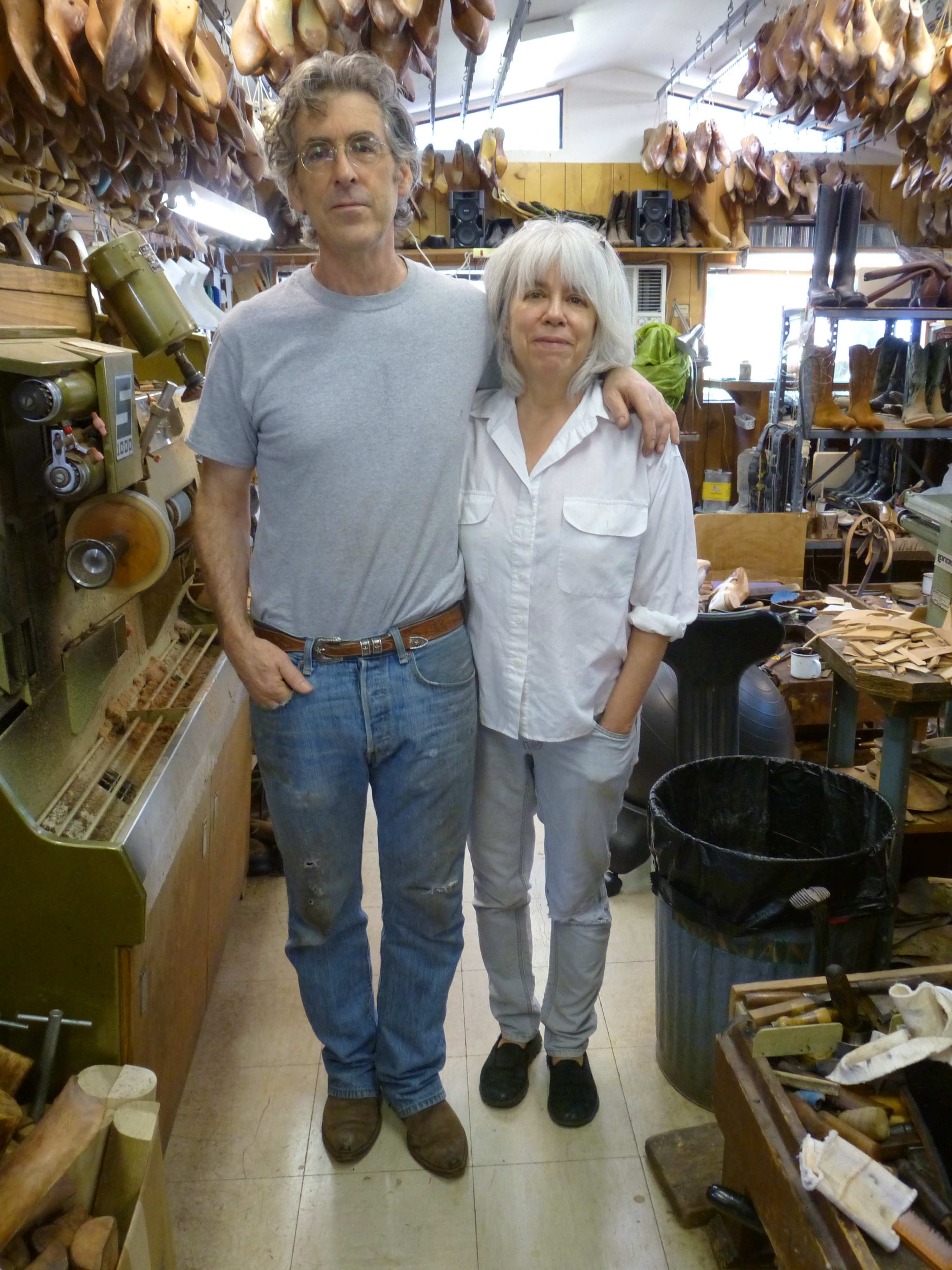 When my boots arrive in four or five months, I’ll give them a premiere on this site.