In today’s Jesus and Mo, Mo tries to exculpate his religion as being responsible for ISIS. And the inspiration for the strip was sent by the author in his/her email:

Tom Holland’s article in the New Statesman is the inspiration for today’s strip. 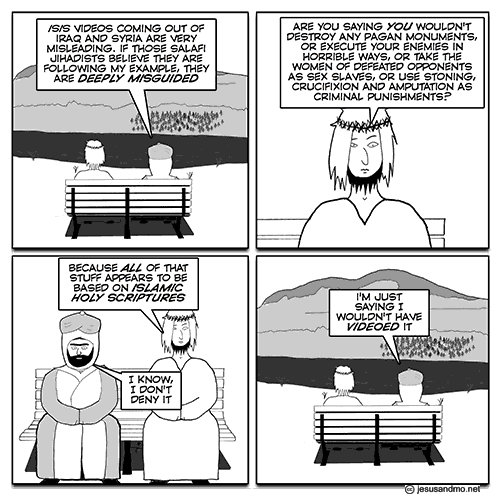 In truth, I’m not sure the videos have damaged ISIS’s cause. Perhaps their barbarity have in fact inspired youths to join the movement in hopes of killing infidels. Who knows? At any rate, what can’t be denied—at least by those who aren’t osculating the rump of faith—is the Islamic inspiration for much of ISIS’s actions and agendas. That’s the subject of Holland’s article, which you should read. One excerpt:

Salafism today is probably the fastest-growing Islamic movement in the world. The interpretation that Isis applies to Muslim scripture may be exceptional for its savagery – but not for its literalism. Islamic State, in its conceit that it has trampled down the weeds and briars of tradition and penetrated to the truth of God’s dictates, is recognisably Salafist. When Islamic State fighters smash the statues of pagan gods, they are following the example of the Prophet; when they proclaim themselves the shock troops of a would-be global empire, they are following the example of the warriors of the original caliphate; when they execute enemy combatants, and impose discriminatory taxes on Christians, and take the women of defeated opponents as slaves, they are doing nothing that the first Muslims did not glory in.

Such behaviour is certainly not synonymous with Islam; but if not Islamic, then it is hard to know what else it is.

. . . It is not merely coincidence that IS currently boasts a caliph, imposes quranically mandated taxes, topples idols, chops the hands off thieves, stones adulterers, exec­utes homosexuals and carries a flag that bears the Muslim declaration of faith. If Islamic State is indeed to be categorised as a phenomenon distinct from Islam, it urgently needs a manifest and impermeable firewall raised between them. At the moment, though, I fail to see it.