This tw**t from Steve Pinker called my attention to two Boston universities (one my alma mater, though it’s the Law School that was shamed) which received “2015 Campus Muzzle Awards” from WGBH, Boston’s Public Broadcasting station. They’re given to those individuals and institutions who most blatantly diminish free speech (go to the bottom of the page to see the university awards). 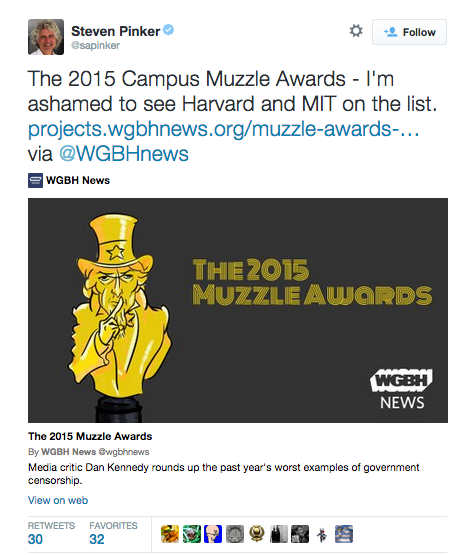 The Harvard Law School “Muzzie” was given for its disinviting a speaker who had already been invited, an act I consider censorship.  (If you choose not to invite a controversial speaker who might spark interesting conversation, I consider that reprehensible but not censorship.) Tellingly—and as often happens—it was the students and not the faculty behind such disinvitations:

Harvard University, a distressingly frequent recipient of Campus Muzzle Awards, wins the honor this year because of the Law School’s “disinvitation” of a controversial speaker.

The silencing of Robin Steinberg followed an all-too-familiar script: The Bronx Defenders Executive Director was invited to speak at the Law School, someone protested, and Ms. Steinberg’s invitation was rescinded. The two groups that initially invited Steinberg — the Women’s Law Association (WLA) and the Law and International Development Society (LIDS) — had also planned to honor Steinberg at the school’s International Women’s Day Exhibit, but they backpedaled from this as well.

The controversy lay in Steinberg’s participation in a rap video that contained violent anti-cop sentiments. In January 2015, New York City officials found Steinberg responsible for misconduct and mismanagement related to the video. On February 16, the New York Post reported on Steinberg’s invitation and implicitly condemned Harvard’s decision to invite and honor her. The student groups reacted to the bad press quickly; by the end of the day, Steinberg had been disinvited.

Notably, the larger Law School community decried the student groups’ decision to disinvite Steinberg. The Harvard Law Record published a letter with more than 180 signatories (including students, alumni, and faculty) arguing that Steinberg’s overall career amply qualified her as a speaker and Women’s Day honoree. Unfortunately, the student groups did not change course.

The Massachusetts Institute of Technology (MIT) got its award for sneakily burying restrictions on free speech in its “anti-hazing” policy (“hazing” is the deplorable practice in some American colleges of older students humiliating and sometimes physically abusing first-year students as part of a coming-of-age ritual). But in the MIT policy is a stinger:

This past September, Brian L. Spatocco, a doctoral candidate in MIT’s Department of Materials Science and Engineering, wrote an op-ed inThe Tech, the independent student newspaper, criticizing MIT’s new hazing policy. As is now common on college campuses, where administrators are wont to deny that the school has a “speech code” (which sounds like censorship, after all), MIT has buried speech restrictions in, among other places, its “hazing” policy.

“Hazing,” which Massachusetts criminal law defines as “any conduct or method of initiation … which willfully or recklessly endangers the physical or mental health of any student or other person,” is, as of this academic year, defined by MIT far more broadly:

“Any action or activity that causes or intends to cause physical or mental discomfort or distress, that may demean, degrade, or disgrace any person, regardless of location, intent, or consent of participants, for the purpose of initiation, admission into, affiliation with, or as a condition for continued membership in a group, organization, or living community.”

So, you’re guilty of hazing at MIT if you inflict “mental discomfort” on a fellow student, or “demean” that person, even if you do not have the “intent” to do so. Under this standard, you’d be hard pressed to find someone on MIT’s campus who wasn’t “hazing” other students.

I’m not sure if this policy has yet been used to punish anyone, but in fact it could be applied in principle to faculty as well, including professors who teach evolution to religious students, for that would discomfit them as they tried to integrate into the university community. This goes far beyond the kind of abuse (including forced drinking of alcohol, physical punishment and so on) traditionally considered “hazing.” Once again we see “mental discomfort” as one of the criteria for violation, a criterion that, as noted above, goes way beyond the state’s criminal law. What’s next at MIT: “safe spaces” with puppy videos, balloons, and Play-Doh?

The other Muzzle Awards go to Brown University for trying to reduce attendance at a controversial debate on rape by scheduling a “safe debate” at exactly the same time (this was apparently done by the University President); to SUNY Buffalo State for censoring a student newspaper that was satirizing US drone strikes overseas; and to Norwich University in Vermont for banning the use of the social networking application Yik Yak, a message board that often says rough things about students (the University President  noted that “[Yik Yak] is hurting my students right now. They are feeling awkward, they are feeling hurt, they are feeling threatened.”) The proper way to deal with this is what Colgate University did: professors used the app for “counter speech” promoting kinder and happier messages.