The atmosphere around Aspen, besides being intellectual, is also green: they provide free bikes for people to ride (not really needed on the grounds, which are compact); those who can’t walk are ferried around in electric golf carts; all the material for meals is recyclable, and there are recycling stations; and the food is healthy but delicious. That’s fine with me: I have to make up for that chili cheeseburger I ate two days ago (see tomorrow’s post). Here’s breakfast, provided free for all attendees, at today’s festival. Notice the healthy aspect:

The breakfast buffet. The covered dish holds “Egg white frittatas with roasted Provencal vegetables” (oy; I’ve never before eaten an egg without the yolk!). There are healthy Siggi’s yogurts (“More protein than sugar,” it says on the label), fresh fruit, bagels, hard-boiled eggs, cranberry and orange juice, and good coffee. 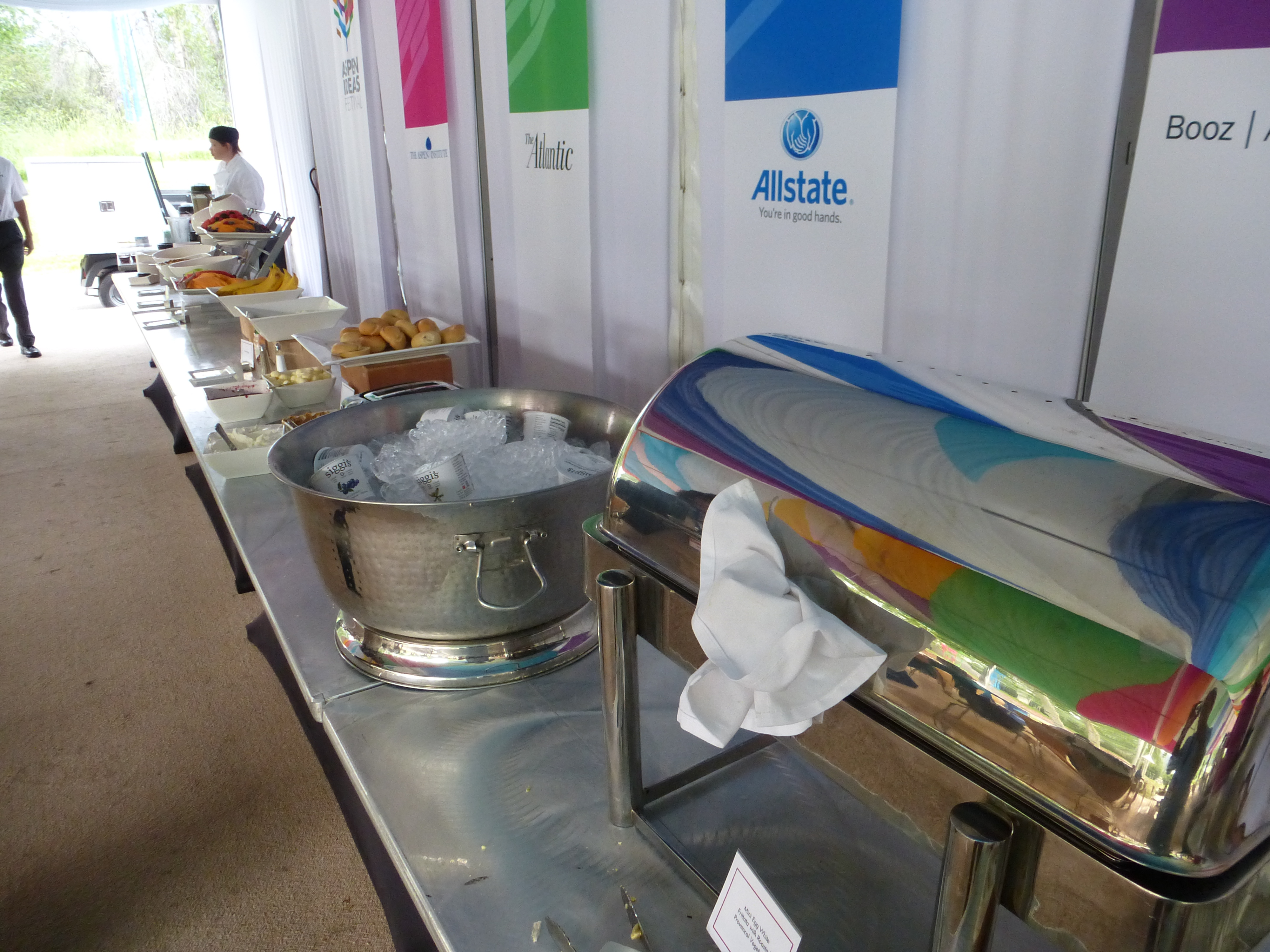 And of course what would a left-wing intellectual festival be without a smoothie bar? There were three types; I had raspberry: 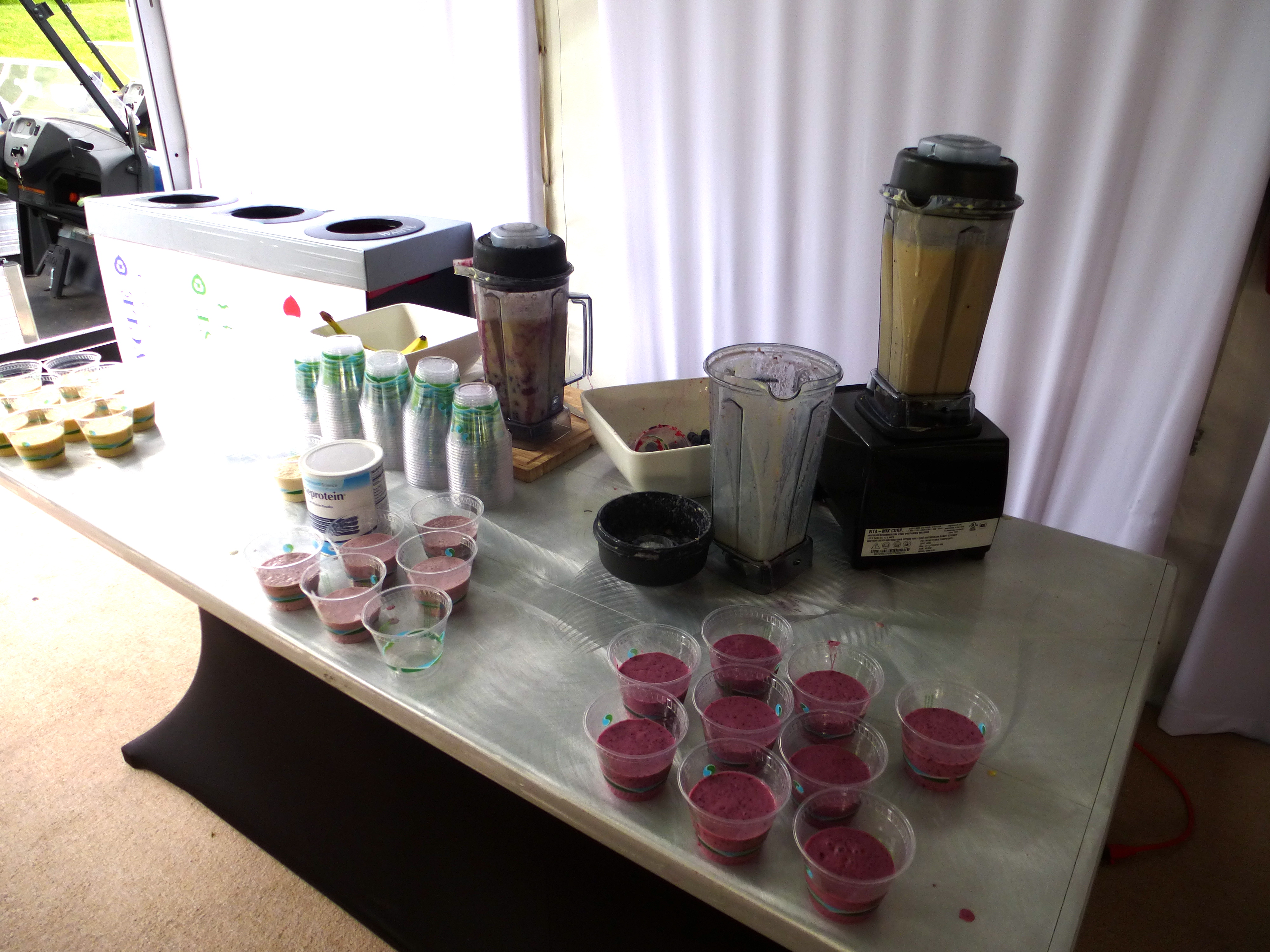 My healthy breakfast: the egg frittata (tried out of pure curiosity; it was ok), a smoothie, cranberry juice, two hard-boiled eggs (to get my yolk quota), a yogurt, a bagel, watermelon and raspberries, and a banana. Note: any reader who criticizes me for having two eggs with yolks will be banned! 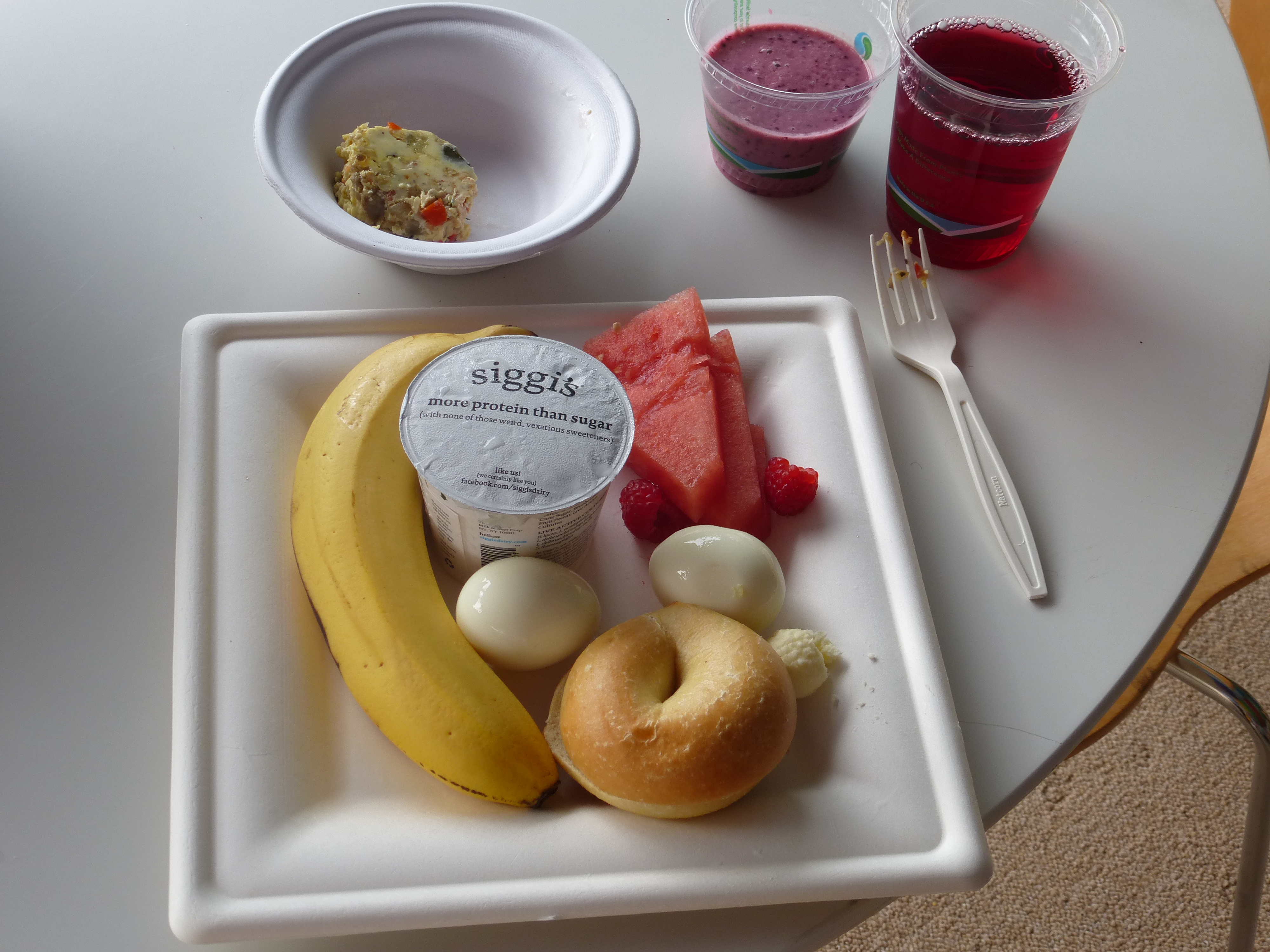 There were also fancy-schmancy granola bars; I took one for later:

Black-billed magpies (Pica hudsonia) hopped around the tent, hoping for crumbs. I confess that I sneaked a few to this bird. Magpies are gorgeous, and unappreciated in the western US because they’re so common. 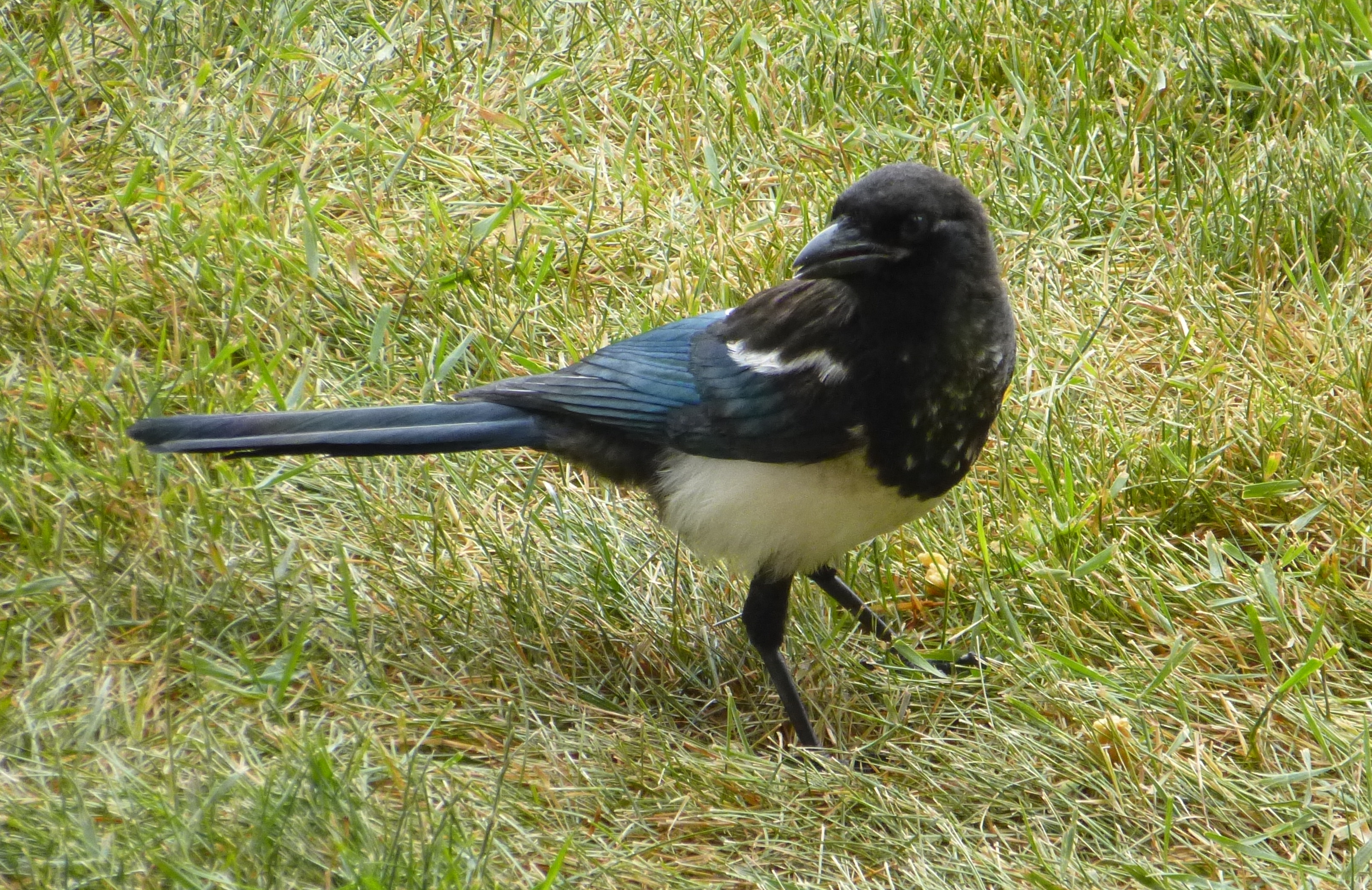 “Yoga stations” are scattered around the grounds should you be seized with the sudden urge to do the double-headed lion, or whatever the hell those poses are called: 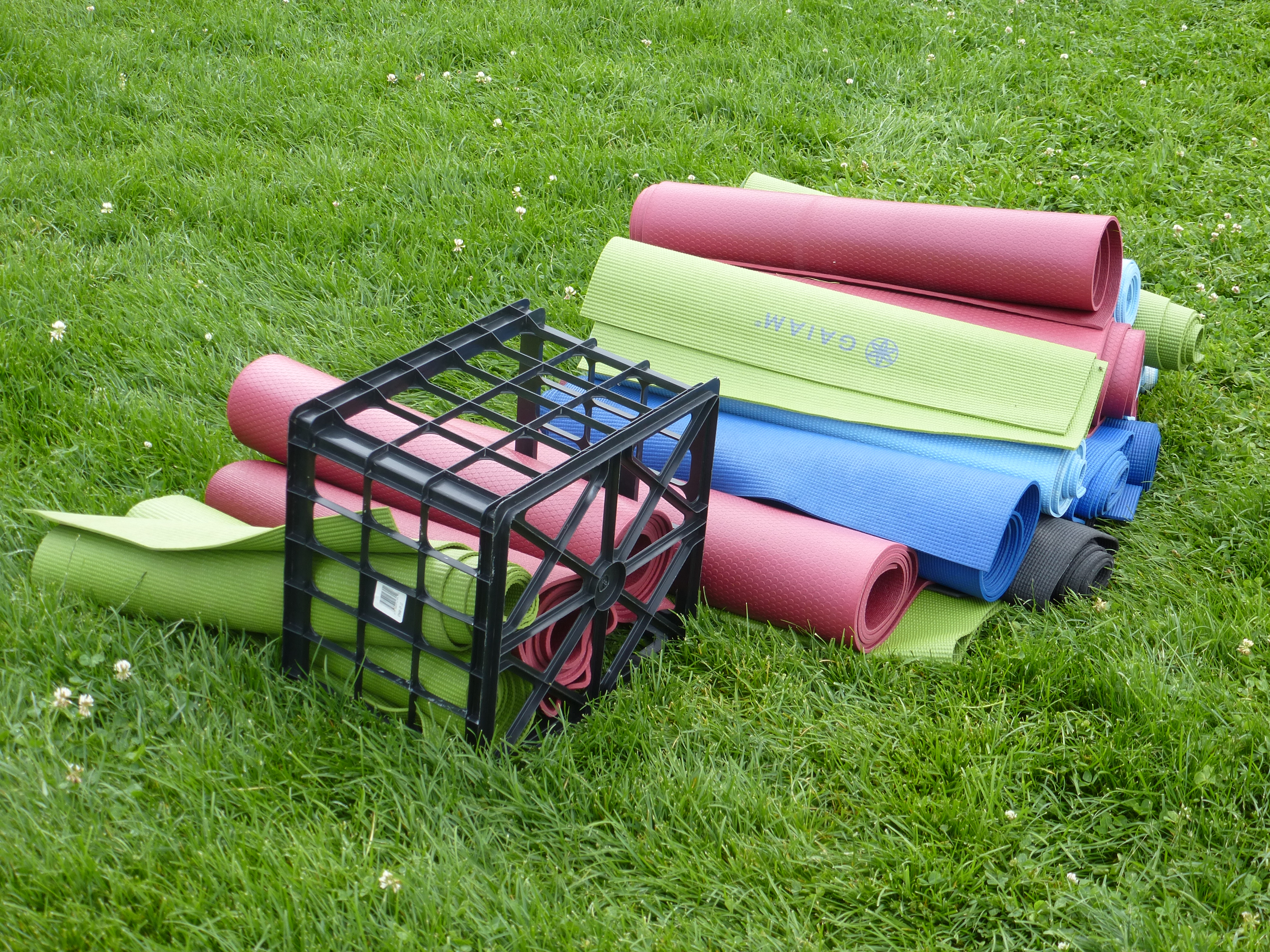 Most of the talks I want to see are tomorrow, but I plan to go to Richard Dawkins’s and Jane Shaw’s joint talk today, as well as Paul Bloom’s and Richard Davidson’s joint talk later (the schedule is here).

Listen in, as two former Oxford colleagues, one from science and one from religion, talk about what leads to a meaningful life — wonder, ethics, empathy and much more. Jane Shaw, Dean for Religious Life and professor of Religious Studies at Stanford and Richard Dawkins, fellow emeritus of New College Oxford, preview the not-yet-published second volume of Dawkins’ memoir, Brief Candle in the Dark: My Life in Science, which is a candid look at the events and ideas that encouraged Dawkins to shift his attention to the intersection of culture, religion, and the natural world.

I met Paul at the speaker’s soirée last night, and he told me he’d be talking about empathy, and would make the point that the classic conception of empathy—to put oneself in another’s shoes as a way of trying to help them—is totally misguided. The summary (it’s a joint talk with Richard Davidson):

EMPATHY, IS IT ALL IT’S CRACKED UP TO BE?
5:30 pm – 6:30 pm MDT on Thursday, July 2, 2015
Empathy is typically seen as wonderful, central to cooperation, caring, and morality. We want to have empathic parents, children, spouses and friends; we want to train those in the helping professions to expand their empathy, and we certainly want to elect empathic politicians and policy makers. But empathy has certain troubling features, and questions have begun to arise about just how useful empathy really is and how it might be different from related capacities such as compassion.
Paul Bloom, Richard J. Davidson

I may also go to these two:

MILLENNIALS LOSING FAITH
3:00 pm – 4:00 pm MDT on Thursday, July 2, 2015
In the United States, 25 percent of young adults under age 30 do not claim affiliation with any particular religion. That’s twice as unaffiliated as their parents were at their age. What does this new reality mean for communities of faith, and culture at large, as a generation of Americans increasingly turns away from such identity-forming institutions? And outside of those traditional religious institutions, what rituals, gatherings, and ways of thinking are defining the millennial search for meaning?

and this one (I quote Rosen in my talks on free will):

EVERYTHING YOU NEED TO KNOW ABOUT THE CONSTITUTION—IN TWO AMENDMENTS
4:10 pm – 5:00 pm MDT on Thursday, July 2, 2015
Jeffrey Rosen, president and CEO of the National Constitution Center, leads an interactive discussion about the myriad issues, history, and opinions.

87 thoughts on “Breakfast at Aspen”