Steven Nelson is a professor in the Japanese Department of the Faculty of Letters at Hosei University in Tokyo. When he offered (along with several other kind readers) to translate the page about me in Hiroko’s book, Neko Shirt, I thought he was certainly qualified to do it; moreover, he said he could do it from the photograph alone. Here’s the page again that he translated: 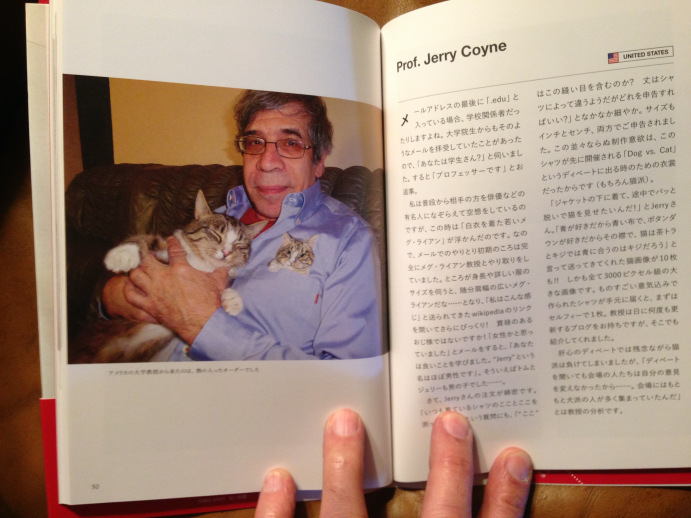 I give Steven’s translation is below. Note that Hiroko calls me “a distinguished looking gentleman of a certain age”, which could also be translated as “old geezer”. Steven added this: “Unfortunately Hiroko called your website a bl*g, which I couldn’t bring myself to censor!”

I find the tale very funny—especially the bits about Meg Ryan and Tom & Jerry—and so am sharing the translation for grins.

[Photo caption: It was a very enthusiastic order that came from an American university professor]

When an email address ends in .edu, it’s often from someone who’s associated with a school. I’d already received an email like that from a graduate student, so I asked, “Are you a student?” To which came the reply, “I’m a professor.”

I have a habit of imagining someone I’m corresponding with as a famous actor or actress, and this time I pictured Meg Ryan in a white lab coat. So during our initial email exchanges, I was convinced I was writing to Prof. Meg Ryan. But when I asked about height and clothing size, I thought to myself that this was a very broad-shouldered Meg Ryan … Then the professor sent me a link to a Wikipedia page, which I opened, and what a surprise I got! It was a distinguished-looking gentleman of a certain age. When I wrote that I’d thought he was a woman, he told me that I had learned something good, that the name Jerry is generally a man’s name. Then I remembered that Tom and Jerry had both been boys …

Jerry’s order was very precise. When I asked him to measure certain parts of shirts that he always wore, he asked whether to include the seams, and which length to give since different shirts had different lengths. He gave me the measurements in both inches and centimeters. His enthusiasm was because the shirt was to be worn at a cats vs. dogs debate (of course he was on the cat side).

“I want to wear it under a jacket, which I will take off during the debate to show everyone the cat,” Jerry said. “I like blue, so the shirt material should be blue; I like button-down collars so the collar should be button-down; a brown tabby would go better with blue than an orange tabby, so it should be a brown tabby.” He sent me a total of 10 photos, all of which were of the 3000 or so pixel size. As soon as the shirt that had been created in answer to such enthusiasm reached him, he sent me a selfie. The professor has a blog that he updates repeatedly every day, and he even introduced the shirt on it.

Unfortunately the crucial debate ended with the cat side losing. “It was because the people in the audience wouldn’t change their minds even after hearing the debate. There were more dog lovers in the audience to begin with.” That was the professor’s analysis.

Many thanks to Steven for the translation.

24 thoughts on “My page in “Neko Shirt”, translated”