Sadly, I haven’t owned (or rather, been owned by) a cat in a while, but those who do may recognize that there are several different kinds of purrs. The two most notable are the “solicitation purr,” in which your cat purrs urgently when it’s mealtime or it wants fusses, and the “non-solicitation purr”, in which your moggie is vibrating away in your lap or before a fire.

In a new paper in Current Biology with the nice title “The cry embedded within the purr” (reference and free download below), author Karen McComb and colleagues show that the solicitation purr contains an element absent in the “normal” (non-solicitation) purr, and that this element is judged by listeners (whether or not they own a cat) as more unpleasant and more urgent than a normal purr. Further, the added element is similar in frequency to a meow, as well as to the cry of a human baby!

What has apparently happened is that cats either learn or have evolved—these can be distinguished by looking at kittens separated from their mother at birth and raised by hand— to make their purrs sound more urgent and annoying at feeding time, which, because the humans are disturbed, get the cats fed sooner. If the “meow” element in the purr has indeed evolved, it would be through a combination of natural and artificial selection: those cats with more disturbing purrs got more food from humans and hence left more offspring. Such a combination of natural/artificial selection may, in fact, be the way that cats became domesticated in the first place.

Why do cats purr at all? They begin doing it as kittens during feeding time, which may stimulate the mother to relax and feed them. I’m also told that cats often purr when injured, and that the frequency of vibration acts to heal things like broken bones (I can’t vouch for that and can’t be arsed to look it up, but I know there was a paper.) And some cats, but not all, purr at feeding time.

The authors recorded both solicitation and normal purrs from ten cats, and played them back to 50 people. They also made sonograms of the purrs. They followed this up with a statistical analyses.

1. When both types of purrs were played at the same volume, nearly everyone, whether or not they had a cat, found the solicitation purrs significantly more urgent and less pleasant. However, the difference in reaction was stronger in those who had a cat—people who had obviously been trained.

2. The sonograms of the two types of purrs show that the solicitation purr has less of a low-frequency “pure purr” peak (extreme left in graphs below, which plot frequency of purr elements versus their loudness in decibels), but also shows a unique “voiced” peak of higher frequency 220-520 Hz (mean 380).

3. Statistical analysis showed that height of the “voiced peak” on the left was significantly associated with a greater sense of urgency and unpleasantness in the listeners.

Here are the same “solicitation” (left) and “normal” (nonsolicitation) purrs as shown in the short paper. Note the presence of the “voiced” peak on the left (arrow) and its absence on the right: 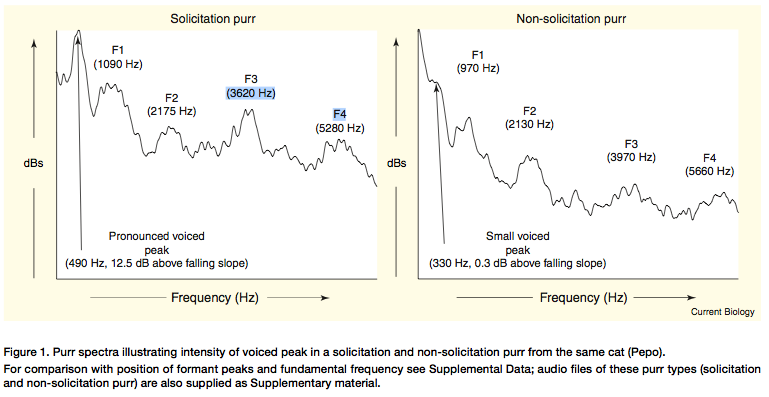 The authors note that the voiced peak has frequencies similar to those of a human infant’s cry, which of course calls parents’ attention to the child’s needs. This, they say, might be a general mammalian sensitivity to that frequency (presumably evolved).  Surprisingly, they don’t mention that the “voiced” element might have evolved in cats, but not other domestic animals, as a way of manipulating their human owners to get out the can opener! It is of course possible to test whether there is, as the authors note, “an inherent mammalian sensitivity to such cries.” My guess is that this vocal element is cat-specific.

Here’s a cat giving a solicitation purr; you can clearly hear the high-pitched meow-like element:

Next time you feed your purring cat, see if you can hear the difference.

43 thoughts on “A cat’s “solicitation purr” contains a cry, and sounds more urgent and unpleasant than a normal purr”